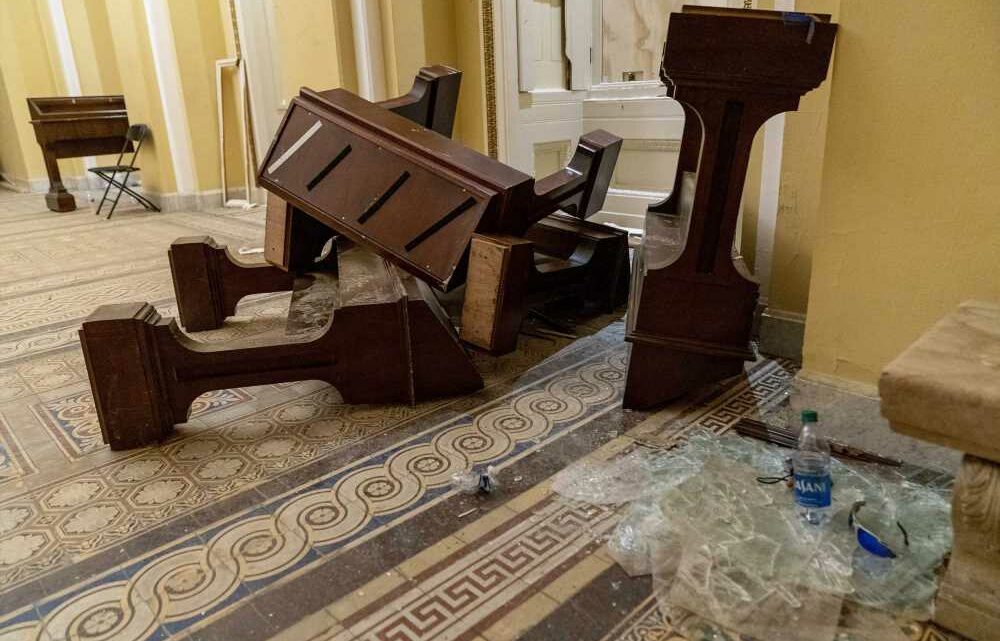 Photos of the Aftermath of the Pro-Trump Riots at the U.S. Capitol Damage was visible in the hallways of the U.S. Capitol building in the early morning hours of Jan. 7, after pro-Trump rioters broke through security fencing outside of the U.S. Capitol and entered the building as Congress met to certify the votes of the Electoral College. Representative Andy Kim of New Jersey assists in the clean up, picking up debris and personal belongings left behind in the Rotunda. Media equipment from the Associated Press was destroyed by Trump supporters outside the Capitol building. A flag reading ‘treason’ was left behind on the floor of the U.S. Capitol building, along with other debris. A photo of Speaker of the House Nancy Pelosi with former President of the United States George H.W. Bush, and his wife, Barbara Bush, was left broken on the mantel of her office. Some rioters left their belongings, including pro-Trump paraphernalia, strewn about the Capitol building. Water bottles and trash were left strewn about the Capitol building after rioters breached security on Jan. 6. Rioters broke windows and glass in an attempt to enter the building. The sign in front of the office of Speaker of the House Nancy Pelosi was damaged in the chaos.