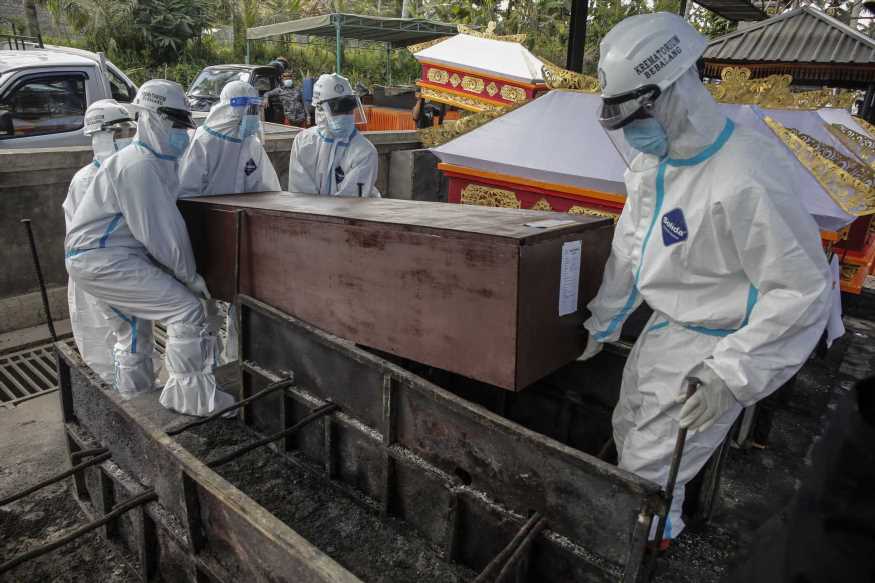 Op-ed: America can help itself by assisting these Covid-racked nations

Tunisia and Indonesia, two of the world's leading Muslim-majority democracies, are facing devastating outbreaks of Covid. They're being pummeled by the delta variant and left defenseless due to a scarcity of reliable vaccines. They need American help urgently, and it would serve our own interests to provide it.

At a time when America's reputation among Arabs and Muslims more broadly is often associated with selling weapons and propping up dictators, the American government and private philanthropists have a unique opportunity to save lives and put our money where our values are.

Now a year and a half into the pandemic's destruction, cries for help from far-off countries can easily fall on deaf American ears in what can feel like an arbitrary decision in a grim process of triage. But the plights of Tunisia and Indonesia deserve special attention because of the extremity of their nightmares and their outsized political significance

Early this month, Tunisia's health ministry admitted that its health care system had "collapsed," overwhelmed by a "catastrophic" wave. As a Tunisian friend tells us, "the delta variant is ravaging our friends and communities," with patients left to die outside hospitals that are forced to "make the horrific choice of shutting [their] doors to new patients."

At this writing, Tunisia's deaths per million outstrip any other country of more than a few million citizens. Last April, when Italy was the first European country whose medical capacities were overwhelmed by Covid, Tunisia responded by sending its own military medical team to offer support.

By official numbers, Indonesia passed Brazil a week and a half ago as the country with the most daily reported deaths, despite its vaccination efforts that were initially fueled primarily by Chinese-made vaccines. Sadly, Indonesia's death rate is still climbing.

Even worse, due to sporadic testing and reportage, experts believe that Indonesia's official caseload reflects only a fraction of the country's true devastation. According to the Seattle-based Institute for Health Metrics and Evaluation, Indonesia's estimated caseload per day is over 1.2 million, compared to an all-time peak of approximately 706,000 in the U.S. — despite Indonesia's population being 20% smaller than the United States.

In a disturbing recent development, both Tunisia and Indonesia have been experiencing harrowing spikes in the number of children suffering. The president of the Tunisian Society of Pediatrics reported that Tunisia registered 3,000 positive tests among children in a single week, and several deaths among infants. In Indonesia, hundreds of children have perished over the past few weeks as the country endures the highest Covid child mortality rate in the world. Two weeks ago, half of the more than 150 children who lost their lives to the virus in Indonesia were below the age of five.

The Muslim world's aspirations for democracy are pinned to a large degree on the fate of these two suffering nations. Indonesia is home to the world's largest Muslim population, and is the world's third largest democracy after India and the U.S. Though Tunisia has a much smaller population, the Arab Spring began there. It is the only country to have achieved a functioning democracy from the mass movements that followed.

The radical forces that have long plagued the Muslim world stand to gain tremendously from the social and economic upheaval that Covid will wreak on these two nations — with the potential to roll back so much of the progress that has been made towards freedom. In a very real sense, the Covid efforts of Indonesia and Tunisia are one of the most important battlegrounds for the health of global democracy today.

There is so much help that is needed urgently: ICU beds, oxygen, oxygen containers, medical kits and even supporting staff. The U.S. already shipped similar supplies to India in its hour of need, another great theater of global democracy, and pushed considerable funds and vaccines to the UN's COVAX initiative to distribute relief around the world. Several other countries have stepped in with initial support for Tunisia, but much more needs to be done for both Tunisia and Indonesia — and quickly.

With the two brightest beacons of democracy in the Muslim world at risk of buckling under the weight of Covid, there are few other places where American generosity in the fight against the virus would be better spent. A tremendous amount is at stake for the free world and for the hopes of Muslim populations for democracy. The American government, philanthropists, and even individuals can go a very long way in saving lives in this pivotal time — if only they act quickly.

Paul Wolfowitz, a senior fellow at the American Enterprise Institute, served as U.S. ambassador to Indonesia (1986-89), assistant secretary of state for East Asia (1982-86), and president of the World Bank Group (2005-07). Bill Drexel is a research assistant at AEI and consulted for the United Nations on early Covid-19 response in the developing world.