Obama tees off on successor in withering convention speech, as Trump challenges his support for Biden 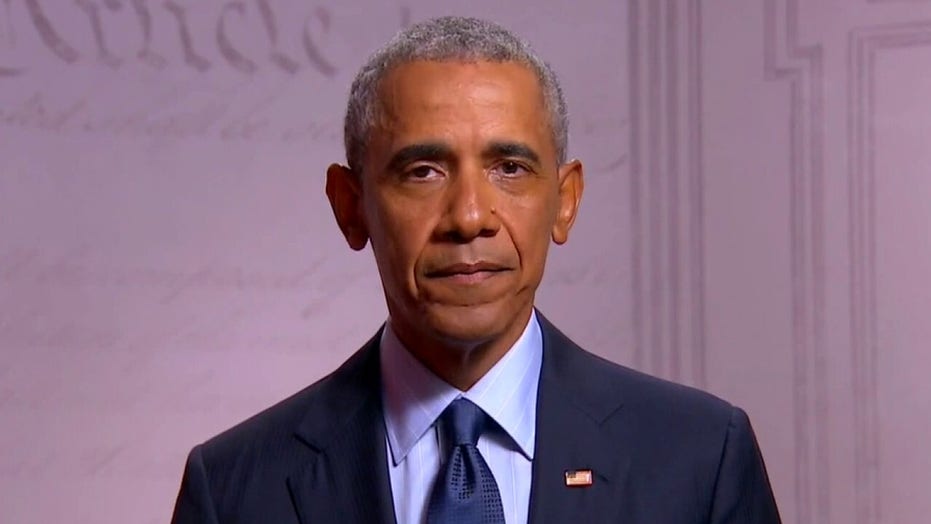 Former President Barack Obama on Wednesday night launched a blistering attack on President Trump, his successor in the White House.

Obama, delivering one of the marquee speeches on the third night of the Democratic National Convention as he made the case for Democratic nominee Joe Biden, didn’t hold back.

And slamming Trump’s handling of the coronavirus pandemic and the collapse of the nation’s economy, Obama argued that “the consequences of that failure are severe. 170,000 Americans dead. Millions of jobs gone while those at the top take in more than ever.”

Obama also argued that during Trump’s tenure in the White House, “our worst impulses unleashed, our proud reputation around the world badly diminished, and our democratic institutions threatened like never before.”

The two-term former president spoke from the Museum of the American Revolution in Philadelphia — a location selected to underscore his message that democracy itself is at stake in this election.

“This president and those in power – those who benefit from keeping things the way they are – they are counting on your cynicism. They know they can’t win you over with their policies. So they’re hoping to make it as hard as possible for you to vote, and to convince you that your vote doesn’t matter,” Obama highlighted as he referred to the president’s repeated slams against voting by mail amid the coronavirus – and his claims that widespread balloting by mail will lead to a rigged election.

“That’s how they win. That’s how they get to keep making decisions that affect your life, and the lives of the people you love. That’s how the economy will keep getting skewed to the wealthy and well-connected, how our health systems will let more people fall through the cracks. That’s how a democracy withers, until it’s no democracy at all,” Obama warned.

The current president – who has spent much of his nearly four years in office trying to undo Obama’s major accomplishments – was apparently watching his predecessor’s speech, and hit back in real time.

"HE SPIED ON MY CAMPAIGN, AND GOT CAUGHT," the president tweeted midway through Obama's speech.

Trump has repeatedly alleged that during the 2016 campaign – when Obama was still in the White House – Democratic partisans within the Justice Department and the FBI abused their powers to investigate members of his campaign and undermine his presidency. Although the Department of Justice watchdog's report found 'significant' FBI errors in the Russia investigation, it did not find evidence of bias.

A few minutes later, the president tweeted “WHY DID HE REFUSE TO ENDORSE SLOW JOE UNTIL IT WAS ALL OVER, AND EVEN THEN WAS VERY LATE? WHY DID HE TRY TO GET HIM NOT TO RUN?”

Trump was referring to reports that Obama tried to disuade Biden from launching another White House run.

The former president also made clear at the start of the 2020 Democratic presidential primaries that he would remain neutral until one of the contenders in a primary field that last summer topped two-dozen had won the nomination. But his presence for months on the sidelines nevertheless fueled GOP claims that he was uneasy about Biden.

Hours before Obama's speech, Trump targeted his predecessor, claiming that the reason he ran in the 2016 election was because Obama performed poorly as president.

Obama has been out of the White House for nearly four years, but he remains extremely popular among Democrats. A Fox News poll conducted in May indicated that 78% of Democrats had a favorable view of Obama. And he used that popularity on Wednesday to make the case for his former vice president and for Biden’s running mate: Sen. Kamala Harris of California.

Talking about "my friend Joe," Obama said "12 years ago, when I began my search for a vice president, I didn’t know I’d end up finding a brother. Joe and I came from different places and different generations. But what I quickly came to admire about him is his resilience, born of too much struggle; his empathy, born of too much grief. Joe’s a man who learned early on to treat every person he meets with respect and dignity, living by the words his parents taught him: 'No one’s better than you, but you’re better than nobody.'"

"That empathy, that decency, the belief that everybody counts. That’s who Joe is," Obama stressed.

Pointing to Harris, who's the first Black and South Asian woman to serve on a major political party's national ticket, Obama said Biden has "chosen an ideal partner who’s more than prepared for the job; someone who knows what it’s like to overcome barriers and who’s made a career fighting to help others live out their own American dream."

‘We are trying to give migrant workers more bargaining power’