No Southern hospitality in GOP Senate clash in Tennessee

“Conservative Bill Hagerty. Endorsed by President Trump. Hagerty and Trump will rebuild our economy,” says the narrator in one of the Tennessee Republican’s recent TV ads.

REPUBLICANS FIRE BACK IN BATTLE FOR CONTROL OF THE SENATE

Hagerty – a Tennessee native and businessman who served as the U.S. ambassador to Japan for the first two years of the Trump administration – showcases at the top of his Twitter feed a tweet earlier this week from Vice President Mike Pence that says “TN’s @BillHagertyTN is my friend & has been a champion for President @realDonaldTrump’s AMERICA FIRST agenda from Day One.”

And on Thursday night, Hagerty was a guest on a digital program hosted by Donald Trump Jr. on the Trump campaign’s digital channel. 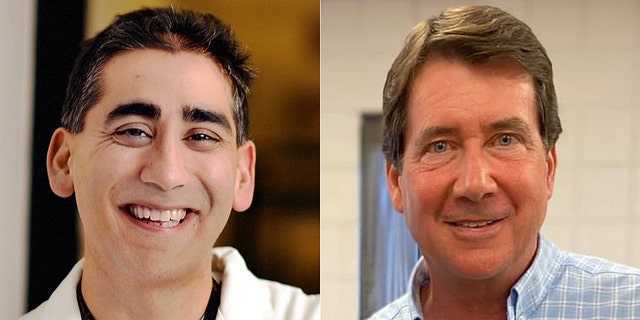 Manny Sethi and Bill Hagerty are two Republicans seeking the nomination for the U.S. Senate in Tennessee (campaign photos)

In 2020, that’s usually enough to put a GOP candidate over the top in the Republican primary. But with less than a week to go until the Aug. 6 Tennessee Senate Republican primary in the race to succeed retiring GOP Sen. Lamar Alexander, Hagerty’s facing serious competition from Dr. Manny Sethi, a rival who says he’s the real conservative populist in the race.

The 42-year old orthopedic trauma surgeon’s a staunch illegal immigration opponent who showcases his own family’s story – his parents legally immigrated to the U.S. from India.

Sethi – who’s running as an outsider and an insurgent candidate – is also trying to claim the Trump mantle. He touts that he voted for Trump in Tennessee’s March 2016 Republican presidential primary and points out that Hagerty supported Sen. Marco Rubio of Florida in the primaries four years ago.

THE LATEST FROM FOX NEWS ON THE SENATE 2020 RACES

Besides the president and vice president, Hagerty enjoys the backing of Tennessee’s other senator, Marsha Blackburn, a longtime conservative congresswoman who won the Senate seat in 2018. And he’s also been endorsed by Senate Majority Leader Mitch McConnell from neighboring Kentucky and Sen. Tom Cotton of Arkansas.

Sethi has his own high-profile endorsements – conservative Sens. Ted Cruz of Texas and Rand Paul of Kentucky — as well as the influential Family Research Council.

Former Rep. Zach Wamp – a conservative who represented the eastern part of Tennessee for 16 years in Congress – is also backing Sethi. He told Fox News that “without the Trump endorsement, Sethi would be up by 20 points because he is a much better candidate. Early on, the Trump endorsement gave Hagerty credibility but as the race progressed, it became much less the factor.”

Tennessee native Jessica Taylor, who analyzes Senate races for the Cook Report, a leading non-partisan political handicapper, said that “Hagerty from the beginning was seen as the favorite because when you win the president’s endorsement, it’s typically been a silver bullet in Republican primaries. But Sethi has been able to tap into the outsider mantra.”

As Sethi’s closed the gap in public opinion polling, the race has taken a negative turn – Hagerty started blasting Sethi earlier this month.

“I’m essentially running against a guy who should be in the Democratic primary. He defends Obamacare. He advocates for socialized medicine,” Hagerty told Donald Trump Jr. on Thursday night. “He applied for a position in the Obama White House.”

And the narrator in a Hagerty TV commercial stresses that “Trump conservatives can’t trust Manny Sethi."

Sethi – speaking directly to the camera in one of his TV spots – fired back.

“You know why Hagerty’s doing this, right. We’re winning. The truth. I hate Obamacare, testified against it in front of the Senate. I’m a Christian, which is why I’m pro-life,” he said. “End of the day, it’s about who you believe. Me or Mitt Romney’s guy.”

Sethi was spotlighting Hagerty’s contribution years ago to now Sen. Romney’s presidential campaigns. Romney is one of the most vocal GOP critics of Trump in Congress.

Tennessee Republicans say the race is a departure from the more genteel primaries of the past.

It’s also an example of how the state GOP has shifted in the era of Donald Trump.

The state had a history of business-friendly moderate Republicans – such as Howard Baker, Fred Thompson, Bill Frist, Bob Corker, and Alexander – until Blackburn’s election two years ago.