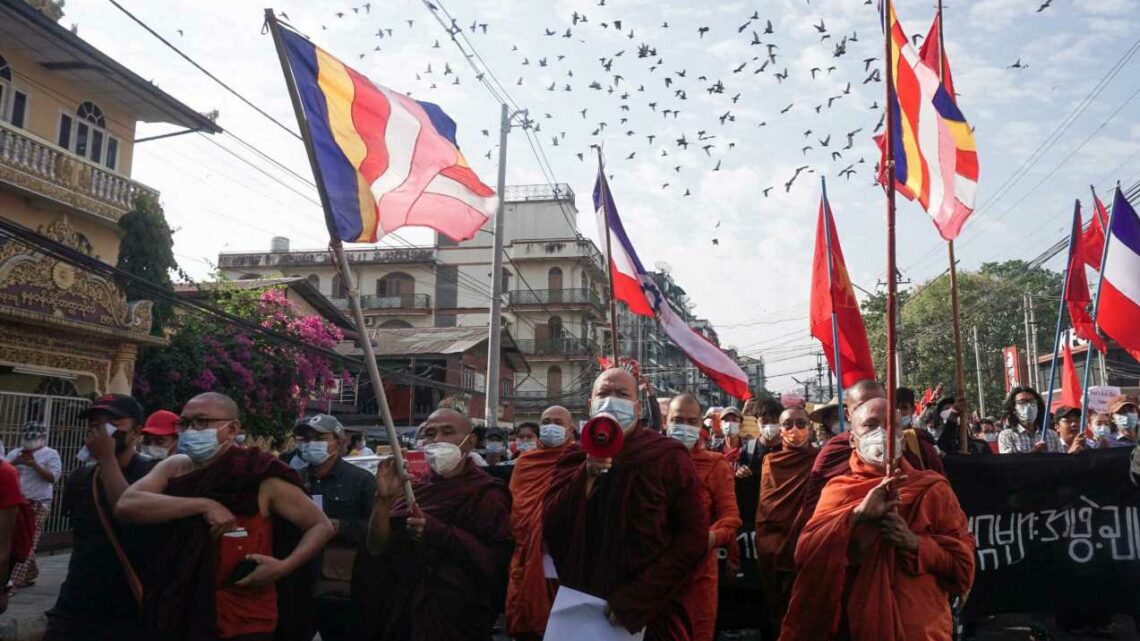 Police fired a water cannon at protesters in the Myanmar capital on Monday as tens of thousands of people across the country joined a third day of demonstrations against the military's removal of elected leader Aung San Suu Kyi a week ago.

Calls to join protests and to back a campaign of civil disobedience have grown louder and more organized since last Monday's coup, which drew widespread international condemnation.

"We health workers are leading this campaign to urge all government staff to join the (civil disobedience movement)," Aye Misan, a nurse at a government hospital said at a protest in the biggest city of Yangon. "Our message to the public is that we aim to completely abolish this military regime and we have to fight for our destiny."

Weekend protests were the biggest since the "Saffron Revolution" led by Buddhist monks in 2007 that helped prompt democratic reforms that were upended by the Feb. 1 coup.

Police in the capital Naypyidaw fired brief bursts of a water cannon against a group of the thousands of protesters who had gathered on Monday, video from the scene showed.

In Yangon, a group of saffron-robed monks marched in the vanguard of protests with workers and students. They flew multicolored Buddhist flags alongside red banners in the color of Suu Kyi's National league for Democracy (NLD), which won a landslide election in November.

"Release Our Leaders, Respect Our Votes, Reject Military Coup," said one sign. Other signs read "Save democracy" and "Say No to Dictatorship."

Thousands marched in the coastal city of Dawei, in the southeast, and in the Kachin state capital in the far north, where they were dressed head to toe in black.

So far gatherings have been peaceful, unlike bloody crackdowns during previous widespread protests in 1988 and 2007.

A convoy of military trucks was seen passing into Yangon late on Sunday, raising fears that could change.

Reuters has been unable to contact the junta for comment on the protests and state television has not mentioned them.

The government lifted a day-long internet ban at the weekend that prompted even more anger in a country fearful of returning to the isolation and even greater poverty before a transition to democracy began in 2011.

In addition to the street protests, a campaign of civil disobedience has begun, first with doctors and joined by some teachers and other government workers.

"We request government staff from all departments not to attend work from Monday," said activist Min Ko Naing, a veteran of the demonstrations in 1988 that first brought Suu Kyi to prominence.

Suu Kyi won the Nobel Peace Prize in 1991 for campaigning for democracy, and spent nearly 15 years under house arrest during decades of struggling to end almost half a century of army rule.

The 75-year-old has been kept incommunicado since army chief Min Aung Hlaing seized power in the early hours of Feb. 1 to counter what the military said was widespread election fraud. Myanmar's electoral commission has rejected those claims.

Suu Kyi faces charges of illegally importing six walkie-talkies and is being held in police detention for investigation until Feb. 15. Her lawyer said he has not been allowed to see her.

The United Nations Security Council called for the release of Suu Kyi and other detainees last week and the United States is considering targeted sanctions.

"Protesters in Myanmar continue to inspire the world as actions spread throughout the country," Thomas Andrews, the United Nations special rapporteur on Myanmar said on Twitter. "Myanmar is rising up to free all who have been detained and reject military dictatorship once and for all. We are with you."