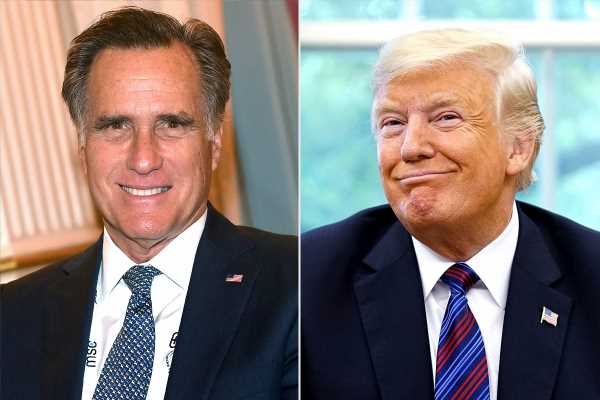 Mitt Romney thinks Donald Trump isn't going anywhere, as much as he might wish otherwise.

The Utah senator talked about Trump's political future in an interview with The New York Times this week.

Romney, one of the most prominent Republicans opposing the 74-year-old former president, spoke candidly about the paradox of Trump's role and what it means for other conservatives who have broken with him.

"Will President Trump continue to play a role in my party? I'm sure he will," Romney, 73, told the Times' Dealbook in a virtual interview that aired Tuesday. "He has by far the largest voice and a big impact in my party."

Romney, himself the 2012 Republican nominee for president, continued: "I expect he will continue playing a role. I don't know if he'll run in 2024 or not, but if he does I'm pretty sure he will win the nomination."

Asked if he would campaign against Trump in the future, Romney (who once met with Trump about becoming secretary of state) said he would "not be voting for President Trump again — I haven't voted for him in the past — and I would probably be getting behind somebody who I thought more represented the tiny wing of the Republican Party that I represent."

When pressed on his belief that Trump would be able to clinch the 2024 Republican nomination — even after the fallout from the deadly U.S. Capitol attack and Trump's second impeachment — Romney cited Trump's enduring standing with the GOP base.

"I mean a lot can happen between now and 2024, and I'm not great at predicting … so I don't really know what will happen there," Romney said. "But I look at the polls and the polls show that among the names being floated as potential contenders in 2024, if you put President Trump in there, among Republicans, he wins in a landslide."

As Romney acknowledged, despite Trump's two impeachments, his months-long failure to accept the results of his electoral loss, and the Jan. 6 attempted coup on the Capitol by a mob of his supporters, the Republican Party has struggled with if and how forcefully to separate itself from the former president.

The party has certainly seen fractures, though.

While Trump was ultimately not convicted by the Senate, 10 House Republicans joined the Democratic majority in voting to impeach — the most such votes against a president by members of his own party. Even the No. 3 House Republican, Liz Cheney, voted to impeach. Seven Republican senators went on to vote to convict Trump at his trial, including Romney.

At a press conference on Wednesday Cheney said that Trump should not speak at the upcoming Conservative Political Action Conference in Florida … though House Minority Leader Kevin McCarthy, next to her, said that he should.

Romney, who has long been a vocal critic of Trump's, lambasted the former president for his role in inciting the Jan. 6 insurrection just hours after it took place.

"We gather due to a selfish man's injured pride, and the outrage of supporters who he has deliberately misinformed for the past two months and stirred to action this very morning," Romney said. "What happened here today was an insurrection incited by the president of the United States."

Even as Trump lost November's election, he has touted the strength of the Republican ticket when he is running — particularly compared to how GOP candidates did in the 2018 midterms, without him on the ballot as well.

But he remains a divisive figure.

Tens of thousands of people who previously identified as Republican changed their voter registrations in the wake of the attempted insurrection; and the wing of the party that had long resisted Trump's push to reshape it again grew vocal.

"The Republican Party as I knew it no longer exists," Jimmy Gurulé, who served as the undersecretary of the treasury for terrorism and financial intelligence under Bush, told Reuters earlier this month. "I'd call it the cult of Trump."

Reuters also reported that more than 120 people — including GOP officials and former Trump staffers — participated in a recent call about potentially creating a third party, which would face immense logistical and political challenges.

Trump has been largely silent since flying to Palm Beach, Florida, after Joe Biden's inauguration.

But he will wade back into public this weekend when he delivers his first major post-White House speech at CPAC) in Orlando, Florida.

Several reports indicate that he is expected to use the event to float the possibility of running for president in 2024 and reassert his central role in Republican politics.

Weekly Covid deaths in England and Wales drop again by 22%