Missouri teacher resigns after being told to remove pride flag, not discuss sexuality

A Missouri teacher has resigned from his position after being told to remove an LGBT pride flag from his classroom and refrain from discussing sexuality with students.

John M. Wallis, a 22-year-old theatre teacher at Neosho Junior High School in southwest Missouri, announced on Twitter that he was resigning after parents complained about the pride flag in his classroom.

“At the beginning of the school year, I had two signs above my whiteboards that read ‘In this classroom everyone is welcome’ and an LGBTQ+ pride flag on my bookshelf,” Wallis, an openly gay man, tweeted. “This was an attempt to make my classroom more open and welcoming for all of my students and nothing was ever taught about the flag because it stood there as a reflection of my classroom as a safe space for my LGBTQIA+ students.”

In the Twitter thread, Wallis explained how parents complained about the flag and accused them of pushing his own personal political agenda in the classroom.

“I was then asked to sign a letter that stated I would not discuss human sexuality or my own personal sexuality in the classroom and could have no displays or coursework on those subjects,” Wallis tweeted. “This action was the reason for my resignation.”

Wallis has also filed a complaint with the U.S. Department of Education’s Office of Civil Rights.

Wallis says he was sent a letter by the school following the parent complaints that if he is “unable to present the curriculum in a manner that keeps your personal agenda on sexuality out of your narrative and the classroom discussions, we will ultimately terminate your employment.”

School District Superintendent Jim Cummins said in a statement to the Springfield News-Leader,  “As per all personnel matters, there is a limited amount of information that is allowed to be shared by the school district.”

The school district did not immediately respond to a request for comment from Fox News. 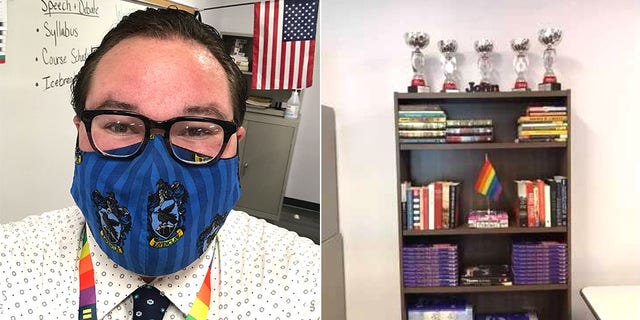 Cummins added that Wallis was hired on Aug. 13, 2021 and resigned Sept. 1, 2021 and has told the district he plans to “pursue a different career path.”

“It appears that there is a different set of rules if you are an LGBTQ+ educator,” Wallis wrote on Twitter. “Neosho has no mention of gender identity or sexual orientation in their non-discrimination policy, and that is disconcerting enough. Couple that with a policy banning anything that expresses part of me in the classroom, and it makes for a hostile work environment.”

Wallis told Fox News that despite the ordeal, he has no ill feelings towards Neosho.

“I want people to know that I do not hate Neosho. I grew up here. I love the place. But this policy right now – because it doesn’t protect LGBTQIA+ people – does not allow us to truly help all of our educators and all of our students,” Wallis said. “I don’t want people to think that I have some vendetta against this district. I don’t. I want to bring to light that this discrimination still exists and that there are policies that need to change. I don’t at all hate Neosho. I love it. I love the place so much. And it kills me to be leaving.”

Since China's Mining Ban, Bitcoin Hashrate Has Recovered by 68% And Counting