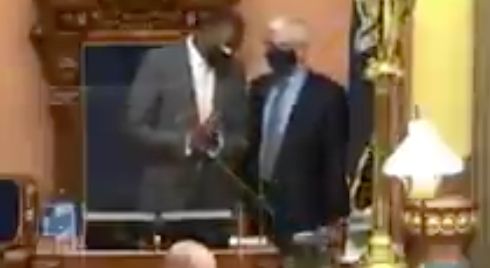 Michigan’s Republican Senate Majority Leader Mike Shirkey was caught on a hot mic on Wednesday appearing to double down on conspiracy theories around the Jan. 6 Capitol attack.

Speaking to Michigan Lt. Gov. Garlin Gilchrist on the state Senate floor, Shirkey can be heard saying: “I frankly don’t take back any of the points I was trying to make.”

Only a day before, Shirkey had apologized for his “insensitive comments” after he was caught on video last week saying the Jan. 6 insurrection was “a hoax from day one” and that “that wasn’t Trump people.”

In his remarks on the hot mic Wednesday, Shirkey says: “The assignment of cause, it was planned weeks and months in advance by some … We’re gonna find out, the FBI is gonna identify within the next couple weeks who was actually behind it.”

To be clear, we know who was behind the Jan. 6 attack: It was an armed mob of former President Donald Trump’s supporters who — after Trump again lied about the legitimacy of the election — stormed the Capitol, where lawmakers were certifying election results. Five people died in the violence, including a Capitol police officer.

On Wednesday, as Shirkey made his comments, Trump’s impeachment trial was taking place in the U.S. Senate. Trump was impeached by the House last month for “incitement of insurrection.”

Shirkey’s office did not immediately respond to a request for comment.

In his same remarks last week that were caught on video, Shirkey also made crass remarks about physical violence against Michigan Gov. Gretchen Whitmer (D), who last year was the target of a kidnapping plot by right-wing militia extremists. He said: “We’ve spanked her hard on the budget … Spanked her hard on appointments,” and later added: “I did contemplate, once or twice, I did contemplate inviting her to a fistfight on the Capitol lawn.”

Lt. Gov. Gilchrist issued a statement Wednesday saying Shirkey was “fanning the flames of dangerous conspiracy theories about the 2020 election and the January 6 insurrection in Washington, alongside aggressive, sexist threats toward the governor.”

As for the remarks Shirkey made to Gilchrist on the Senate floor Wednesday morning, which were caught on a hot mic, Gilchrist said: “It is clear that his so-called apology was not heartfelt … Rather, it was an empty gesture made for political expediency.”

The Case Against Donald Trump, the 'Inciter in Chief'