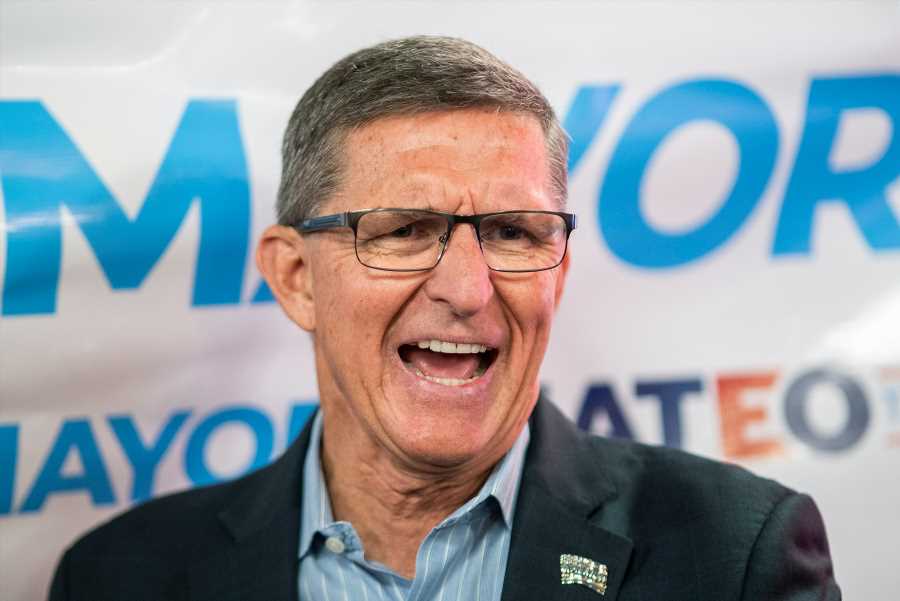 Michael Flynn is no longer a general, no longer the national security adviser, and no longer a credible figure in mainstream conservatism. This hasn’t stopped him from becoming one of the most powerful influencers among the nether regions of the MAGAverse. The Trump World hero has spent the bulk of the year spreading conspiracy theories at behind podiums at QAnon conferences, in front of evangelical church congregations, and on a never-ending stream of janky, grift-y internet shows and podcasts. It wouldn’t be hard to argue that he’s at or near the height of his popularity.

The world of disinformation grifters can be a ruthless one, though, as Flynn found out this week. One minute you’re calling out the devil for doing his work through condiments, the next you’re being called out as the devil yourself.

Sorry Nicki, No One in Trinidad Suffered 'Swollen Testicles' From the Vaccine

How True Is 'Respect'? Fact-Checking the Aretha Franklin Biopic

On Monday, Flynn appeared on “Thrivetime Show: Business School Without the B.S.,” a podcast clearly meant to drive business to host Clay Clark’s business coaching program, the ventures of affiliated snake oil salesmen, and Clark’s health-focused “Reawaken America” tour, featuring Flynn and other notable names. Mike Lindell, the pillow guy, for instance. Most of the tour’s upcoming dates are listed as sold out.

The interview with Flynn begins with a lot of talk about “waking up” to reality, followed by Clark claiming that PCR Covid tests are rigged, and that once you’re into the hospital doctors give you drugs developed by George Soros to kill you (one of the drugs he cites, Remdesevir, was administered to President Trump), all the while withholding “100-percent effective” treatments like hydroxychloroquine and Ivermectin, also known as the horse paste that has caused a flood of calls to poison control from victims of Clark-type con men.

“Does it shock you that the CDC protocols, General Flynn, are actually causing people with a soul who love America, doctors, to be accidentally euthanizing Americans at scale?” Clark asks eventually. “Does that shock you?”

“It doesn’t shock me,” Flynn replies, adding that even though the doctors may be accidentally euthanizing Americans with the Soros drugs, they’re also to blame because it’s incumbent upon them to understand what they’re giving people. “You can’t say you’re just following orders,” Flynn says. “It sounds like the Nazis.”

The discussion continues like this, conspiracy theory on top of conspiracy theory, one playing off of the other. It’s hard to overstate how far afield of reality, or even mainstream conspiracy-theory culture, the discussion ventures. At one point, Flynn suggests that the government could be secretly administering the vaccine through salad dressing, as Ron Filipkowski first pointed out on Twitter.

“Have you seen this?” Flynn asks.

The idea that “they” are putting vaccines in salad dressing likely trickled down from a recent story about how researchers at the University of California at Irvine are trying to develop a way to grow edible plants that contain the same medication active in the mRNA vaccines. Once a story like this finds its way into conspiracy-theory communities, it gets stripped for parts that can then be distorted to substantiate various fears about government mind control or whatever else, after which a game of telephone ensures that ends with your uncle eating his salad dry.

Your uncle is doing this because General Flynn and Clay Clark warned him about salad dressing while pressing the imperative to be “awake” to what’s really happening. The “devil,” as Clark’s wife put it during Flynn’s appearance, is out there trying to deceive people. “We need to go in with eyes wide open, saying, ‘Lord, let us not be deceived! Show us the truth!” she said. “Take the blinders off our eyes!’”

Clark followed his wife’s brief sermon by finishing a point he was making about how Senomyx, flavor additive in practically in many popular foods, contains human embryonic cells, a conspiracy theory that has long been debunked. “This is insane!” Flynn says.

It goes without saying that Flynn and his adherents are living in a make-believe world predicated on assembling your own reality from a buffet of deranged conspiracy theories. This world free of factual guardrails breeds a kind of fervency that figures like Clark are hoping will make them rich. The “Thrivetime Show” video stream features fixed black boxes advertising links to “protect your health” and “protect your wealth,” and the show notes to Monday’s episode include several more links advertising “100% Effective & Affordable COVID-19 Treatments & Therapies,” with a number of Covid patients and deaths affixed to each one of them. Is any of this true? It doesn’t matter. It’s the Wild West of information dissemination, and conspiracy-theory paranoia huckstering is the new Gold Rush.

The cultish fervency born out of the lack of any need for factual substantiation breeds a deep suspicion of anyone who isn’t hip to ideas like the government spiking your vinaigrette with a dose of mRNA. President Trump isn’t even above this skepticism. When he told a crowd of his most devoted fans in Alabama to get the vaccine last month, they started booing him. It isn’t hard to understand why after watching a few minutes of “Thrivetime Show,” one of an innumerable number of sources of Covid disinformation disaffected Americans are consuming, and trusting, as an antidote to mainstream media, which is controlled by George Soros, who, remember, wants to kill you.

Flynn isn’t beyond reproach, either. Pastor and conspiracy theorist Rick Wiles — who, too, has alleged that Covid vaccines are part of a “mass death campaign” — announced recently that he has turned on Flynn after Flynn referenced “those sevenfold rays” during a prayer at a Christian conference last week. Wiles called it a “New Age prayer” that was not made in the name of Jesus. “My advice to you is to separate from General Michael Flynn,” Wiles said. “I don’t care about politics, I care about your soul.”

Wiles used to be a fan. When Flynn was forced out of his positions as national security adviser in 2017, Wiles said it was only because Flynn knew the truth about Pizzagate, and that a cabal of “devil-worshiping, Luciferian, demon-possessed maniacs” was running the world. Just a few years later, as disinformation researcher Jim Stewartson pointed out, it’s Flynn whom Wiles is comparing to Satan, “the deceiver, the father of lies.”

You got that right, Rick.