Republican-led state legislatures across the country are enacting restrictive voting laws in the wake of the Jan. 6 attack on the U.S. Capitol by people who believed former President Donald Trump’s lies about a stolen election.

The Justice Department wants the public to know it is fighting back.

To meet the moment, Attorney General Merrick Garland said on Friday the Biden administration would “rededicate the resources of the Department of Justice to a critical part of its original mission: enforcing federal law to protect the franchise for all eligible voters.”

Because of the lack of preclearance of state voting laws, Garland said the Justice Department would double the number of voting rights enforcement staff in the next 30 days. The department will also issue new guidance to states on how to conform to existing federal voting and civil rights laws for new election laws, redistricting and the conduct of post-election audits.

“There are many things open to debate in America,” Garland said. “But the right of all eligible citizens to vote is not one of them. The right to vote is the cornerstone of our democracy, the right from which all other rights ultimately flow.”

The announcement by Garland did not include much in the way of specific actions. Instead, it signaled that the Department of Justice, under the control of Democrats, would use all of its available powers to protect voting rights in the states as Republicans seek to make it harder to vote.

The Biden administration has staffed up the Civil Rights Division of the Justice Department with a lineup of top officials with deep backgrounds in voting rights. The Senate recently confirmed Civil Rights Division Assistant Attorney General Kristen Clarke, who got her start in the division’s voting section and has spent her career working on civil rights issues.

The administration has also brought in Pam Karlan, a longtime civil rights lawyer who had a big role in voting rights cases during the Obama administration, to a top role in the Civil Rights Division, where she now serves under Clarke.

The Supreme Court struck a major blow to federal oversight of voting rights in 2013 when it narrowly struck down a critical provision of the Voting Rights Act that allowed the federal government to review changes to voting rights laws in states with a history of racist voting laws for any discriminatory impact. Chief Justice John Roberts, who wrote the 5-4 majority opinion, contended that “things have changed dramatically” in the South since the VRA was signed in 1965.

In the nearly eight years since Roberts made that declaration, states controlled by Republicans have been particularly aggressive about tightening voting restrictions, justifying their actions by pointing to mythical beliefs in mass voter fraud that are unsupported by any evidence.

Now, Trump continues to convince millions of his followers that the election was stolen, and Republican-run states are using that belief to make it harder to vote for communities that tend to vote for the Democratic Party and easier for Republican legislators to overturn election results they don’t like.

Black voters are at the heart of Trump’s stolen election myth. After he lost the election, he baselessly alleged corruption in predominantly Black counties that contain major cities like Atlanta, Detroit, Milwaukee and Philadelphia. In a series of lawsuits filed after the election, Trump tried to get votes cast in these Black communities thrown out so that he could be declared the winner. He did the same for the heavily Latino counties of Maricopa in Arizona and Clark in Nevada. All of his lawsuits failed.

Republicans are targeting these same populations with laws to suppress votes and take away local control from predominantly Black and Latino communities. In places where Trump could not throw out votes after the last election, the GOP hopes to prevent votes from ever being cast before the next one.

Republican-run states have made it harder to cast mail and absentee ballots, reduced early voting, banned local jurisdictions from implementing certain rules to make voting more accessible, and tightened voter identification laws. In some cases, as in Georgia, Republicans have enabled partisan Republican legislators to seize control of local election administration from city and county officials ahead of elections. 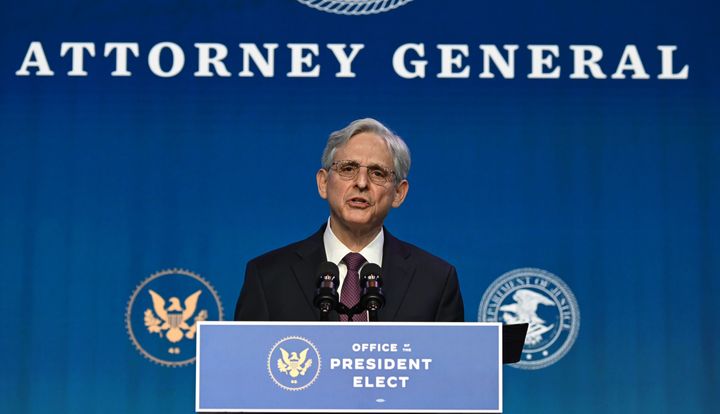 Garland noted the “dramatic rise in legislative efforts that will make it harder for millions of citizens to cast a ballot that counts” after the 2013 Supreme Court decision. Referencing the audits that have popped up in several states based on Trump’s voter fraud lies, Garland said that “some jurisdictions, based on disinformation, have utilized abnormal post-election audit methodologies that may put the integrity of the voting process at risk and undermine public confidence in our democracy.”

The Justice Department will now be reviewing these laws and post-election “audits” for any violations of federal election or civil rights law.

“We will use all existing provisions of the Voting Rights Act, the National Voter Registration Act, the Help America Vote Act, and the Uniformed and Overseas Citizens Absentee Voting Act to ensure that we protect every qualified American seeking to participate in our democracy,” Garland said.

Since the Supreme Court gutted the Voting Rights Act’s preclearance authority, Garland noted that the Justice Department would have to return to challenging every law and election rule as it is introduced and enacted at the county or parish level. He noted that this practice was previously used by President John Kennedy and the famed Justice Department civil rights lawyer John Doar prior to the adoption of the Voting Rights Act.

Garland also noted that he would take action to combat “the dramatic increase in menacing and violent threats against all manner of state and local election workers, ranging from the highest administrators to volunteer poll workers.”

He declared that the department will pursue federal charges against anyone threatening election workers or administrators.

Democrats have introduced federal legislation that would reverse many Republican-backed voter suppression laws at the state level. The For The People Act passed the House and is still under consideration in the Senate, but Sen. Joe Manchin (D-W.Va.) opposes the bill because no Republican supports it.

With Manchin refusing to help Democrats overturn partisan Republican election laws making it harder to vote, the Department of Justice and the courts are the last line of defense against these bills. The courts, however, are dominated by conservative judges appointed by Republican presidents who, by and large, oppose federal voting rights legislation and the enforcement of the 1965 Voting Rights Act.

Garland called on Congress to pass both the For The People Act and the John Lewis Voting Rights Advancement Act, the latter of which would restore the department’s preclearance authority. But his Friday announcement made clear the department will enforce the voting rights laws currently on the books.

Trump, after all, continued to insist that massive voter fraud was responsible for his loss of the popular vote to Hillary Clinton in the 2016 election. He supported additional restrictions on voting that would have a disparate impact on Democratic-leaning voters.

Garland’s announcement signaled a sea change at the department with Trump gone. He detailed the history of the department, its attempts to defend Black civil rights during Reconstruction, and the fitful fight for civil and voting rights over the ensuing century and a half.

There were efforts to protect and advance voting rights throughout this period, from the first Ku Klux Klan Act to the enactment of the 14th and 15th amendments to the passage of the Voting Rights Act in 1965.

“But progress to protect voting rights ― especially for Black Americans and other people of color ― has never been steady,” Garland said. “Moments of voting rights expansion have often been met with counter-efforts to curb the franchise.”

This ranged from the violent terrorism of the KKK that helped end federal Reconstruction to the ensuing imposition of Jim Crow laws. Trump’s lies about election fraud and his campaign to throw out Black people’s votes is just the latest attempt to oppose voting rights.

“We know that expanding the ability of all eligible citizens to vote is the central pillar,” Garland said. “That means ensuring that all eligible voters can cast a vote; that all lawful votes are counted; and that every voter has access to accurate information. The Department of Justice will never stop working to protect the democracy to which all Americans are entitled.”