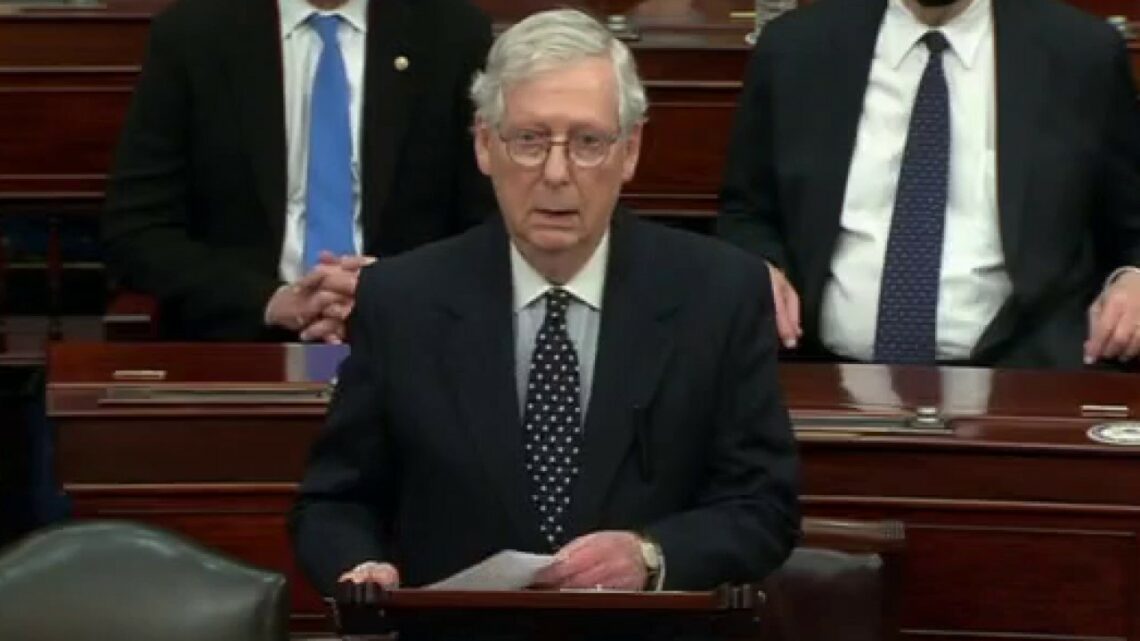 Noting that the presidential election was "not unusually close," Sen. Majority Leader Mitch McConnell urged his colleagues not to object to the electoral vote count.

The Senate leader, between a series of emotional remarks, said that the vote to certify the Electoral College results was the most important vote in his 36 years in office.

"Our nation deserves a lot better than this," the Kentucky Republican said in opening remarks.

At least 13 Republican senators have said they will object to the results favoring President-elect Joe Biden in some fashion.

McConnell noted that every election features "some illegality," which he called "unacceptable." He said he supported state-led voting reforms and said that pandemic voting procedures "must not become the new norm."

Still, McConnell said that no evidence had been provided that would tip the scale in favor of President Trump.

"We cannot simply declare ourselves a national board of elections on steroids," he said. "The voters, the courts, and the states have all spoken … if we overrule them it would damage our republic forever. This election was not unusually close."

He added that courts, many consisting of Trump-appointed judges, had rejected claims of mass election fraud "over and over."

McConnell said that many of the Trump team’s allegations of fraud included "sweeping conspiracy theories," and if the election were overturned by "mere allegations from the losing side, our democracy would enter a death spiral."

As Congress meets to certify results, Trump has insisted he will "never" concede and pressured Vice President Mike Pence to thwart the process. Pence is set to preside over the joint session on Wednesday.

McConnell’s speech was his first public statement against the president’s efforts, after 12 senators and over 100 House members geared up for a fight they are likely to lose after all sides have certified their votes.

In private, McConnell has warned Republicans — many of whom will be up for reelection in 2022 — of the grave political ramifications of attempting to stymie Biden's transition into the White House, but he has publicly shied away from going toe-to-toe with the president.

Meanwhile, Texas Republican Sen. Ted Cruz called for "a bit less certitude" on "both sides," as he led the effort to contest the election results. Instead of tossing the presidency back to Trump, Cruz proposed "door number three," a compromise between the two sides — appointing an electoral commission to conduct a 10-day emergency audit of the results and any evidence of fraud.

Trump has kept up a steady barrage of tweets, praising Sens. Ted Cruz, Ron Johnson, and others who have pledged to vote against certifying the election results, while simultaneously lambasting McConnell and any other Republican who refuses to stand with them.

"I hope the Democrats, and even more importantly, the weak and ineffective RINO section of the Republican Party, are looking at the thousands of people pouring into D.C. They won't stand for a landslide election victory to be stolen. @senatemajldr @JohnCornyn @SenJohnThune," Trump said on Twitter Tuesday, stoking supporters who flocked outside the White House overnight to protest Congress' vote.

Hundreds of Trump supporters stormed Capitol Hill barricades Wednesday and entered the Capitol in support of the president, and two nearby buildings were evacuated.

The president addressed the protesters in a speech, calling on Pence to send the election "back to the states."

"We are supposed to protect our country and support our Constitution," Trump said. "States want to revote. The states got defrauded, they were given false information and now they want it back."

He added: "All Pence has to do is send it back to the states…and we become president, and you are the happiest people."

Credit card issuers like American Express and Citi have added COVID-friendly credits, bonuses, and flexibility — making it easier to earn and redeem rewards during the pandemic
Technology