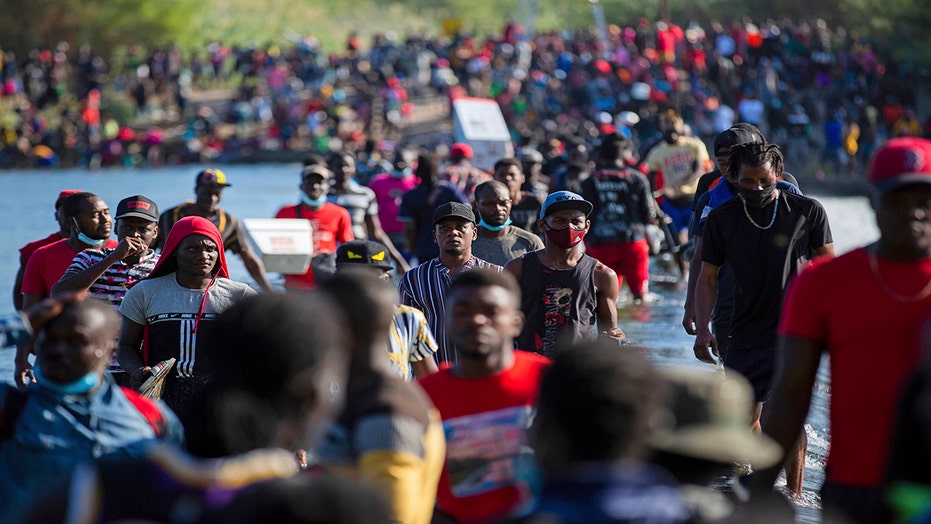 Border is out of control: Sen. Cornyn

Rep. Maxine Waters decried the treatment of Haitian migrants arriving by the thousands at the southern border, claiming what occurred was “worse than what we witnessed in slavery.”

The California Democrat spoke at a press conference outside the U.S. Capitol Wednesday, held in response to photos and claims that surfaced this week showing Border Patrol agents attempting to coral some of the migrants flooding across the Rio Grande. The agents were accused by some of whipping the border crossers despite that they had reins in their hands and not whips.

“I’m pissed,” said Waters. “I’m unhappy and I’m not just unhappy with the cowboys who were running down Haitians and using their reins to whip them. I’m [unhappy] with the administration. We are following the Trump policy … he is the one that does not follow the constitution and would not allow those seeking refuge to petition to get into the country. What the hell are we doing here?

Waters also questioned “who’s paying these cowboys to do this work,” saying they have “got to be gotten rid of.” The California congresswoman claimed that the treatment of Haitian migrants is an attempt to “take us back to slavery days” and insisted that children who are “unfortunate to be in this situation must be allowed into the United States immediately.”

On Tuesday, National Border Patrol Council Vice President Art Del Cueto pushed back against claims of agents whipping migrants. During an interview with Fox News, Del Cueto explained agents are not assigned whips and the techniques used were within safety protocol to protect both the agent and the horse involved in the incident.

“They were not whipping anyone,” said Del Cueto. “They don’t carry whips. They don’t get assigned whips. What they do is a training technique that has been shown to them to make sure that no one takes over their horse. It was to protect the horse, to protect the rider, and to protect the individual that was trying to cause chaos and knock down that rider from that horse.”

Rep. Joyce Beatty, D-Ohio, chairwoman of the Congressional Black Caucus, also spoke during the event, saying the actions taken toward Haitian migrants in Del Rio, Texas, were “some of the most horrific things that we’ve seen, some of the most emotional, deplorable, unthinkable.”

“Today, I had the honor of taking eight members of the Congressional Black Caucus and leadership directly to the White House,” Beatty told those in attendance. “And part of that was to speak to those deplorable photos and ask why that all those recognized riding horses using their reins to chase down Haitians like they were cattle and goats to be suspended, terminated.”

Beatty also stated that Democrats have requested a “halt” on the Border Patrol’s use of horses when patrolling the border. “We have never witnessed people who looked like me to be treated the way those Haitians were,” Beatty said, adding that the group who visited the White House put down a “list of demands” regarding the treatment of Haitian migrants.

Rep. Ayanna Pressley, D-Mass., also attended the press conference, where she questioned the “cruel, the inhumane, and flat out racist treatment” of Haitian migrants at the southern border.

“We cannot and we must not look away in this moment,” Pressley said, describing the living conditions for those in Haiti as an “unprecedented humanitarian crisis” that needs a “humanitarian response.”

“Instead of leading with compassion and grace, these families have been met with cruelty,” Pressley claimed, saying those that have fled to America have been “rounded up like cattle, whipped, handcuffed, and detained.”

“Haitian lives are black lives, and if we truly believe that black lives matter, then we must reverse course,” Pressley said, calling on President Joe Biden’s administration to “immediately and indefinitely halt all deportations of Haitian migrants.”

“Congress must do the work of investigating and ensuring accountability of the egregious and white supremacist behavior of Border Patrol agents in Del Rio Texas,” Pressley added.

Dr. Marc Siegel: Why COVID is still defeating us
Technology