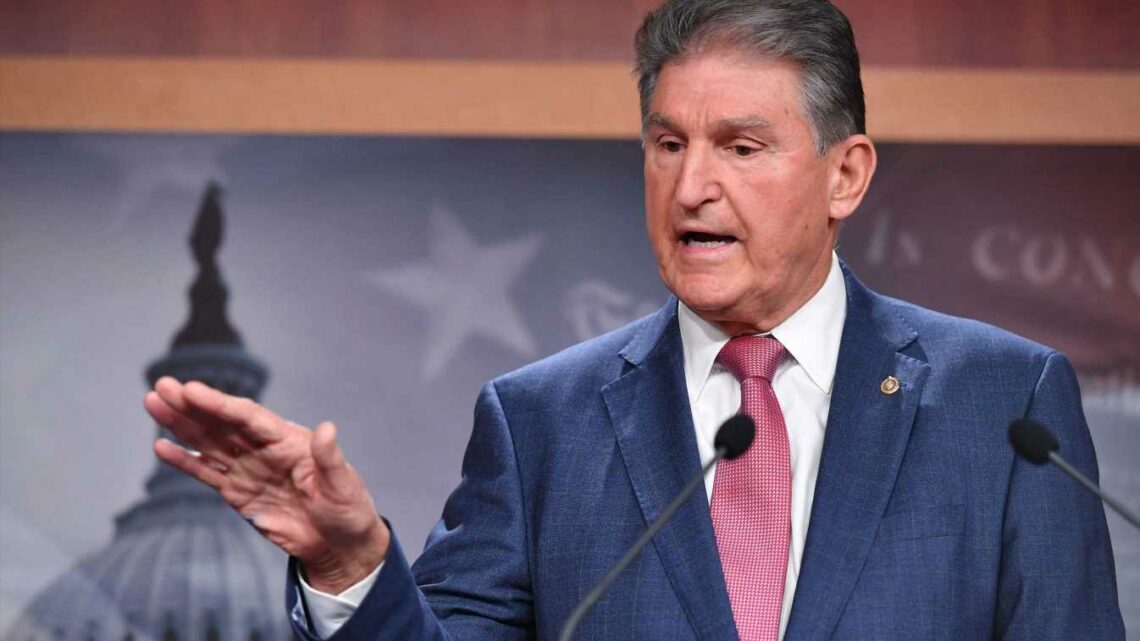 Manchin's statement was the latest blow to Democrats, who had hoped to have the bill finalized this week and ready for a vote in the House.

Speaking to reporters in the Capitol, Manchin accused House progressives of playing "political games" by refusing to pass a Senate approved infrastructure bill until every Democrat in the Senate endorsed the companion social spending bill.

"Holding this [infrastructure] bill hostage is not going to work in getting my support for the reconciliation bill," said Manchin, who represents West Virginia.

Manchin, along with fellow centrist Sen. Kyrsten Sinema, D-Ariz., have already won several big concessions in negotiations over Biden's social safety net and climate plan. The measure, originally pegged at $3.5 trillion, would pay for universal preschool for 3- and 4-year-olds, expand Medicaid and Medicare, and dedicate $550 billion to clean energy and climate change programs, among other things.

The bill requires for passage the votes of all 50 Democrats in the Senate, plus a tie-breaker from Vice President Kamala Harris.

Before he would agree to back the spending bill, Manchin said he needed to see a detailed analysis of the economic impacts of it.

"I will not support a bill that is this consequential without thoroughly understanding the impact it will have on our national debt, our economy and the American people," he said. "That is why we must allow time for complete transparency and analysis on the impact of changes to our tax code and energy and climate policies."

Manchin's remarks came as Biden was in Glasgow, Scotland, attending the COPP26 international climate conference. The president had hoped to have a deal agreed to between the House and Senate before he left for Europe last week.

But progressives balked at the prospect of passing the infrastructure bill with only a pledge from Biden that Democratic holdout senators would in turn vote for their priorities in the social spending bill.

Manchin also expressed skepticism at the tactic Democrats are employing to cut the cost of the original $3.5 trillion plan down to less than $2 trillion, which was one of his demands. To make the math work, Democrats have shortened the duration of many of their most generous social programs.

Implicit in that is their expectation that once people have grown accustomed to receiving assistance from the federal government, such as with child care costs, they will so strongly object to the end of that assistance that Congress will be forced to extend the program indefinitely.

"As more of the real details of the basic framework [for the reconciliation bill] are released, what I see are shell games — budget gimmicks that make the real cost of the so-called $1.75 trillion bill estimated to be almost twice that amount … if you extended it permanently," said Manchin.

Shortly after Manchin spoke, the White House pushed back against his claims about the bill and tried to put a positive spin on what was clearly an unfortunate turn in the negotiations.

"Senator Manchin says he is prepared to support a Build Back Better plan that combats inflation, is fiscally responsible, and will create jobs," White House press secretary Jen Psaki said in a statement. "The plan the House is finalizing meets those tests …. as a result, we remain confident that the plan will gain Senator Manchin's support."

House Speaker Nancy Pelosi also responded to Manchin, but without mentioning his name.

"Build Back Better will grow the economy without increasing inflation, because it is fully paid for," Pelosi said in a statement shortly after Manchin spoke.

Pelosi argued that the bill will lower the cost of major expenses like health care child care, making it "anti-inflationary in that sense as well."

Pelosi's statement closed by saying Democrats "look forward to passing" both the infrastructure and social spending bills. But it did not give any timeline for votes. This was a notable omission, and signaled that the Speaker likely does not intend to hold House votes on either of the two bills in the coming days.

But this ambiguity from Democratic leaders was not echoed in remarks from the leader of the House Progressive Caucus, Rep. Pramila Jayapal, Ore.

Shortly after Manchin threw cold water on the idea of passing a social spending bill anytime soon, Jayapal said she and her caucus were ready to vote to approve one as soon as tomorrow or the next day, "pending some final negotiations on things we care very much about, immigration and prescription drug pricing."

After weeks of refusing to rally behind the social spending bill, Jayapal seemed to signal Monday that progressives believe they have secured as many concessions from Senate Democrats as they are going to, and are ready to pass the two bills quickly and shift the focus, and the pressure, away from the House and back to the Senate.

Asked if she was in touch with Manchin, Jayapal told CNN she would leave it to Biden to have conversations directly with senators.

"The president came to the [House Democratic]caucus, and assured us that he would get 51 votes in the Senate for this deal that he has been negotiating with Senator Manchin and Senator Sinema," she said.

"The president thinks he can get 51 votes for this bill. We're going to trust him, we are going to do our work in the House, and let the Senate do its work," she said.

"But we're tired of continuing to wait for one or two people. We trust the president that he will get 51 votes for this, and we will pass both bills through the House as soon as we have these final negotiations wrapped up."

Biden returns from Europe late Tuesday night, and the White House has expressed confidence that every Democrat in the Senate will back his agenda.

Lawmakers, alumni groups call for free speech on campuses: ‘There has to be some legal action’

Eth 2.0 Could Be Ethereum’s Savior From the Wrath of Investors!
Technology