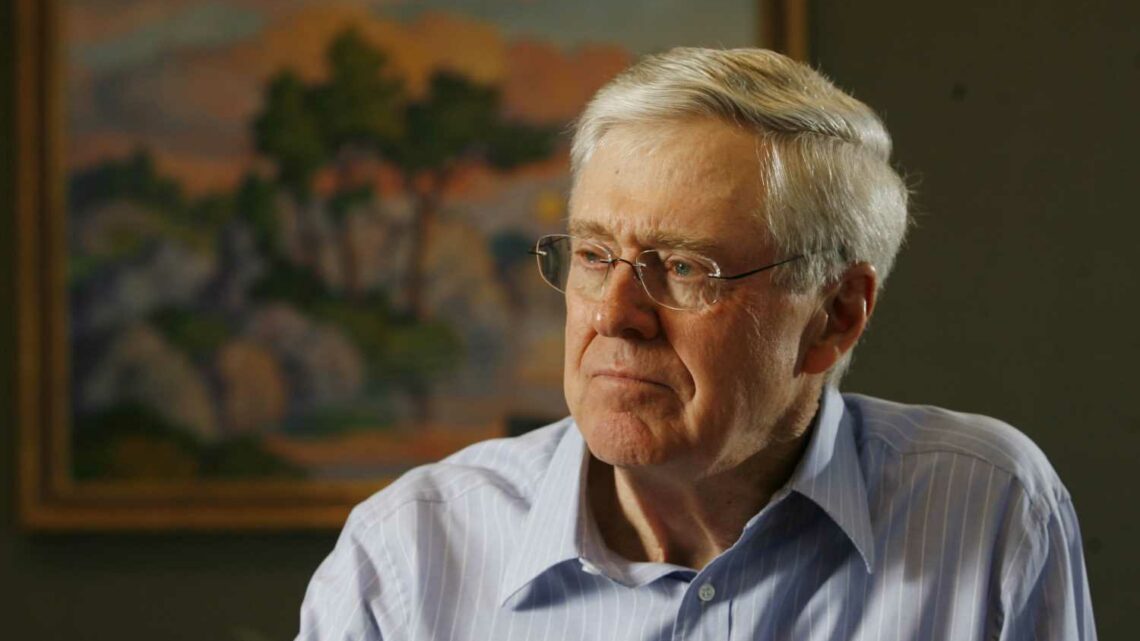 After years of working to influence the federal government, the billionaire Koch family's influential political advocacy group and industrial conglomerate have yet to engage much with President Joe Biden's White House.

Records show that the group known as the Koch network, which is partially funded by Charles Koch, and Koch Industries, which has been in the Koch family since the 1940s, have not lobbied the White House since Biden became president earlier this year.

With the exception of some Democratic contenders, the Koch group has typically backed Republican candidates and their economic policies. They saw some key policy wins during the Trump administration, and worked for a time with President Barack Obama's administration on criminal justice reform despite opposing elements of his agenda.

Koch himself told multiple publications after the election that he was aiming to work with the Biden administration on several issues.

"I look forward to finding ways to work with them to break down the barriers holding people back, whether in the economy, criminal justice, immigration, the Covid-19 pandemic, or anywhere else," Koch told The Wall Street Journal in November.

Instead, the Koch network's main political arm, Americans for Prosperity, has worked to oppose many of Biden's early initiatives, including his $1.9 trillion Covid relief bill and his $2 trillion infrastructure proposal.

The network has publicly supported Biden announcing withdrawing troops from Afghanistan and Vanita Gupta becoming associate attorney general. And it has called on the administration to improve the immigration system.

A person familiar with the matter also noted that the network plans to endorse former New Jersey Attorney General Anne Milgram as Biden's head of the Drug Enforcement Administration. This person declined to be named as the group has yet to make the decision public. The Charles Koch Foundation previously supported her work on criminal justice reform.

A spokesman for Americans for Prosperity did not deny, however, that there has been a lack of direct engagement so far with the Biden White House.

"We have been consistent in our commitment to support policies that improve people's lives and oppose those that don't – with this and past administrations. Just five months into the Biden administration, we've supported their decision to end the war in Afghanistan and are advocating for better immigration policy and police reform," Bill Riggs, a spokesman for AFP, told CNBC in an emailed statement on Thursday.

"However, massive spending bills disguised as infrastructure will not help people improve their lives and so we oppose them. But we have also offered better policy options that address these concerns and we would be happy to work with Congress and this Administration on these issues. There is a lot of time left in this Administration and this session of Congress. We are open to working with anyone to do right by the American people. And we will not engage in manufactured controversies that pit groups against one another," Riggs added.

Americans for Prosperity didn't lobby the White House during the first three months of the year, according to records. The group spoke with members of the House and Senate.

Last week, the group launched a seven-figure campaign against the Biden infrastructure plan which will initially target 27 lawmakers, including some Democrats, in 16 states.

The effort will include over 100 events across the country, including town halls, rallies and canvassing. It will also include a paid media strategy focused on direct mail and digital advertising. Among other items in Biden's economic plans, the group is opposed to raising corporate taxes and individual taxes on those making over $400,000.

A person familiar with the ongoing efforts of Americans for Prosperity said there has been no indication that the group has yet to directly engage with senior officials within Biden's White House and instead have tried to influence the administration through communications with moderate Senate Democrats. This person declined to be named in order to speak freely about the situation.

Koch Industries also had no lobbying contact with the Biden White House over the first three months of the year, records show. During the first quarter, Koch Industries lobbyists connected with the Treasury Department regarding various bills, and the company's outside lobbyists worked with the Environmental Protection Agency.

CNBC reported in March that Americans for Prosperity was looking to pitch moderate Sens. Joe Manchin, D-W.Va., Kyrsten Sinema, D-Ariz., and Mark Kelly, D-Ariz., on the group's own health care plan, known as the "personal option," which is intended to counter Democratic proposals for a public health insurance option.

The Koch plan is a collection of policy proposals geared toward the private sector that focuses on tax breaks, expanding health savings accounts and slashing regulations. Americans for Prosperity and other right-leaning groups spent millions opposing former President Barack Obama's Affordable Care Act, which is also known as Obamacare.

The tumultuous transition from Trump's administration to Biden's has also represented significant shifts for the Koch network.

The network has said it is open to working with Democrats as long as the organization isn't compromising its principles standing against what they believe to be overt government spending and interference.

After the deadly Jan. 6 riot on Capitol Hill, Koch Industries suggested it would be making changes to its campaign contribution strategy after over 140 Republicans challenged the results of the 2020 election.

Then in March, the Koch Industries PAC gave to at least five House lawmakers who challenged the election results, according to Federal Election Commission records. Out of over 50 contributions made that month, only about six checks went to Democrats, including $5,000 to the moderate Blue Dog Coalition PAC. In April, the PAC wrote two $5,000 checks to Sen. John Kennedy's 2022 reelection campaign. Kennedy, a Louisiana Republican, challenged the results of the election.

A study by the Checks and Balances Project says that at least 16 high ranking officials in the Trump White House had ties to the Kochs.

Marc Short, who was former Vice President Mike Pence's chief of staff, was previously a president of the Koch network policy arms. White House counsel Don McGahn was a lead lawyer, according to the study, for one of the Koch policy groups. Pence himself saw campaign contributions from Koch Industries while he was governor of Indiana. According to Reuters, Pence privately met with Charles Koch at one of the network's donor retreats in 2017.

Americans for Prosperity worked directly with the Trump administration on criminal justice reform. They saw wins with the passing of the Trump tax reform plan and key victories at the judiciary with multiple preferred nominees making their ways onto the Supreme Court.

The network disagreed with Trump when it came to trade and immigration, which led to a rebuke from Trump in late 2018. "The globalist Koch Brothers, who have become a total joke in real Republican circles, are against Strong Borders and Powerful Trade," the former president said in a tweet tirade. The network notably chose not to get involved with the 2020 presidential election.

Koch Industries, records show, spent millions from late 2017 and through 2020 to lobby the Trump administration. Its efforts included engagement with the Trump White House Office, which is headed by the chief of staff.

In the fourth quarter of 2017, Koch Industries lobbying forms show it attempted to influence the White House Office on the tax reform legislation that was later signed by Trump in December of that year.

Biden is now seeking to reverse several of those tax cuts to pay for his expansive agenda.

Almost a quarter of Republicans believe Satan-worshiping pedophiles control the US government, media, and financial sector