Kamala Harris: If elected, my DOJ would have 'no choice' but to prosecute Trump 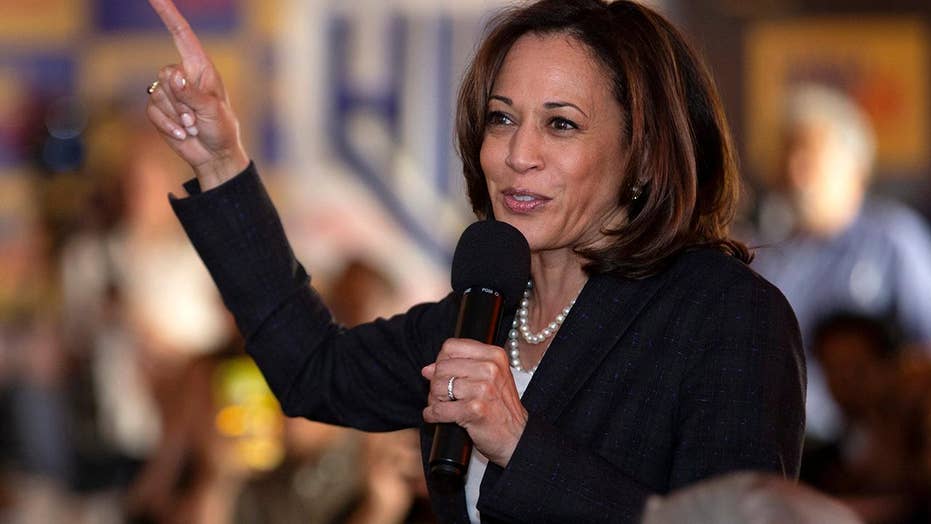 2020 candidate Sen. Kamala Harris, D-Calif., has issued a stunning warning to President Trump that seems to echo controversial recent comments from House Speaker Nancy Pelosi, saying her Justice Department would likely charge him with obstruction of justice if she wins the White House.

Harris, in a newly released interview, said she believes the only reason former Special Counsel Robert Mueller did not recommend prosecuting Trump was because of the Justice Department’s policy against indicting a sitting president. Once out of office, Trump would be subject to charges – and Harris was emphatic in saying the DOJ should pursue them.

“I believe that they would have no choice and that they should, yes,” Harris said on this week’s NPR Politics Podcast.

The former California attorney general and San Francisco district attorney cited the importance of holding everyone accountable for their actions.

“I mean look, people might, you know, question why I became a prosecutor,” Harris said. “Well, I’ll tell you one of the reasons – I believe there should be accountability. Everyone should be held accountable, and the president is not above the law.”

Harris is not the first high-profile Democrat to suggest that not only should Congress pursue impeachment against Trump — but he should face criminal charges once out of office.

Trump reacted to this by calling Pelosi "a nasty, vindictive, horrible person."

Rep. David Cicilline, D-R.I., however, had no problem with Pelosi's remarks.

"I don’t have any difficulty with those words," Cicilline told "Fox News Sunday," comparing them to when then-candidate Trump inspired "lock her up" chants when he ran against Hillary Clinton. A 2018 New York Times report also said that Trump looked into prosecuting Clinton, as well as former FBI Director James Comey.

Joining the chorus of Democrats hinting that prosecuting Trump might be appropriate was another 2020 candidate, Sen. Elizabeth Warren, D-Mass. The progressive Democrat said that Trump would be "carried out in handcuffs" if he were anyone else, though she did not openly advocate charges against him.

Cryptocurrency and Cannabis: Risky Investments with a Twist | BTCMANAGER
Technology