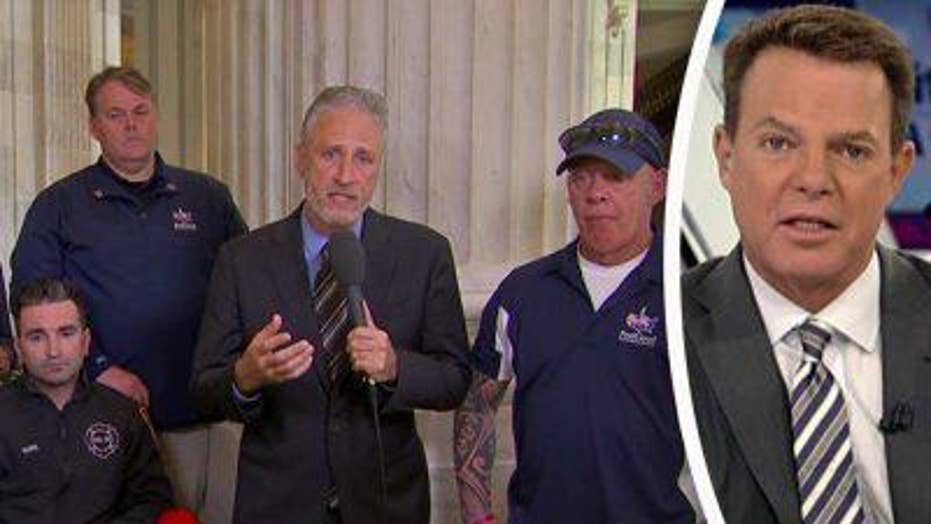 Jon Stewart called on lawmakers to back up their words with actions on the 9/11 victims' compensation fund and help American heroes who are still suffering today.

Stewart made the comments in an interview Tuesday on "Shepard Smith Reporting," telling host Shepard Smith 9/11 first responders and victims should be viewed as a priority beyond tweets and well-wishes.

"That drove me nuts," the comedian said after being asked by Smith about the empty seats he saw on the Hill. "They kept saying it's a 'sub-subcommittee.' There's still people on the sub-subcommittee that aren't here.

"Either 9/11 was a priority or it wasn't. But, your deeds have to at some point match your tweets and your words. Today it didn't.

"No amount of money is going to end the suffering and the grieving that these men and women have to endure. But they can stop making it worse. They can stop adding uncertainty and stress and financial hardship to the lives of these folks."

The sparse attendance by lawmakers was "an embarrassment to the country and a stain on the institution" of Congress, Stewart said during the hearing, adding the "disrespect" shown to first responders now suffering from respiratory ailments and other illnesses, "is utterly unacceptable."

Lawmakers from both parties said they support the bill and were monitoring the hearing amid other congressional business.

Ranking member Rep. Mike Johnson, R-La., predicted the bill will pass with overwhelming support and said lawmakers meant no disrespect as they moved in and out of the subcommittee hearing, a common occurrence on Capitol Hill.

Stewart was unconvinced. Pointing to rows of uniformed firefighters and police officers behind him, he said the hearing "should be flipped," so first responders were on the dais, with members of Congress "down here" in witness chairs answering their questions.

"Why is this so damn hard and takes so damn long?" he asked Johnson and the other lawmakers.

The Justice Department said in February the victims' compensation fund is being depleted and benefit payments are being cut by up to 70 percent.

In his interview with Smith, the former "Daily Show" host said Congress can "stop making it worse" by removing future uncertainty and properly funding the victims' compensation fund.

"I would say it's the so-called fiscal hawks," Stewart responded when asked who he believed is holding up proper funding.

"It's irresponsible, it's disingenuous."

A spokesman for the subcommittee told Fox News all but two of its members attended today's hearing, with Reps Eric Swalwell, D-Calif., and Guy Reschenthaler, R-Pa., those who were missing. The spokesman added that other empty seats seen could have been on account of members coming and going during the course of a hearing.

Initial Exchange Offerings are Providing Big Returns, But Why?
Technology