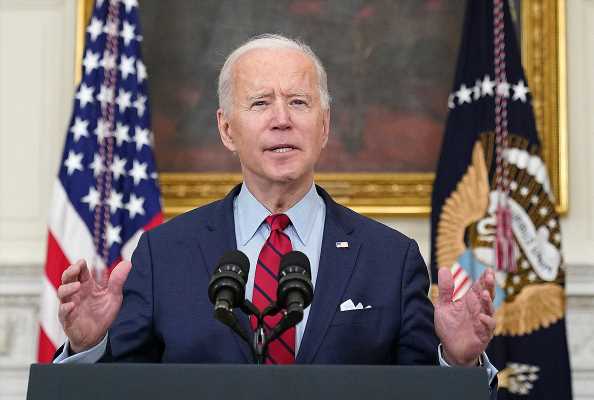 President Joe Biden announced a series of executive actions related to gun control on Thursday during a press conference held at the Rose Garden.

The orders he announced were a direct response to recent mass shootings in Georgia, Colorado and California.

"Gun violence in this country is an epidemic, and it's an international embarrassment," he said before unveiling his plan of instructions to the Department of Justice. "Every day in this country, 316 people are shot. Every single day. A hundred and six of them die every day."

Biden, 78, also announced his nomination of David Chipman, a gun control advocate, to lead the Bureau of Alcohol, Tobacco, Firearms and Explosives.

One of the president's executive actions includes limiting the proliferation of "ghost guns," which are homemade firearms made from kits or parts bought online that typically don't have traceable serial numbers. As part of the plan, he instructed the DOJ to make it required that all parts of manufactured guns have serial numbers and that distributors perform a background check and register the weapon in a client's name before an individual can purchase them.

Another plan outlined by Biden was "to treat pistols modified with stabilizing braces with the seriousness they deserve." The president stated that stabilizing braces make pistols "a hell of a lot more accurate and a mini-rifle" and "more lethal."

The president wants the modified weapons to be subject to the same rules in the National Firearms Act that apply to silencer add-ons. Those requirements include an owner paying a $200 fee and submitting their name and information to the Justice Department.

Additionally, on Thursday, Biden instructed the DOJ to adopt "red flag" laws nationally. Some states already have "red flag" laws. The laws allow police or family members to petition in court to have someone banned from owning or obtaining guns temporarily due to danger or a perceived threat.

The laws, the president said, are helpful in cases from homicide to suicide. "States that have red flag laws have seen and — seen a reduction in the number of suicides in their states," he said. RELATED: Boy, 9, Killed in Calif. Mass Shooting Was Found Dead in Mom's Arms: 'He Took the Bullets for Her'

Those three bills include a background check for anyone purchasing a gun at a gun show or online, closure of what's known as the "Charleston" loophole that allows people to purchase guns after three days if the seller doesn't get a background check back from the FBI within three days, and lastly, a reauthorization of the Violence Against Women Act, which prevents proven abusers and stalkers from obtaining guns.

Finally, Biden instructed the DOJ and the Bureau of Alcohol, Tobacco, and Firearms to issue a report on firearms tracking annually. A report hasn't been done since 2000.

"We got a long way to go.  It always seems like we always have a long way to go.  But I also — today, we're taking steps to confront not just the gun crisis, but what is actually a public health crisis," Biden said at the Rose Garden.

"They're phony, arguments suggesting that these are Second Amendment rights at stake from what we're talking about," the president said. "From the very beginning, you couldn't own any weapon you wanted to own.  From the very beginning that the Second Amendment existed, certain people weren't allowed to have weapons.  So the idea is just bizarre to suggest that some of the things we're recommending are contrary to the Constitution."

Experts say a physically strenuous job is no substitute for exercise