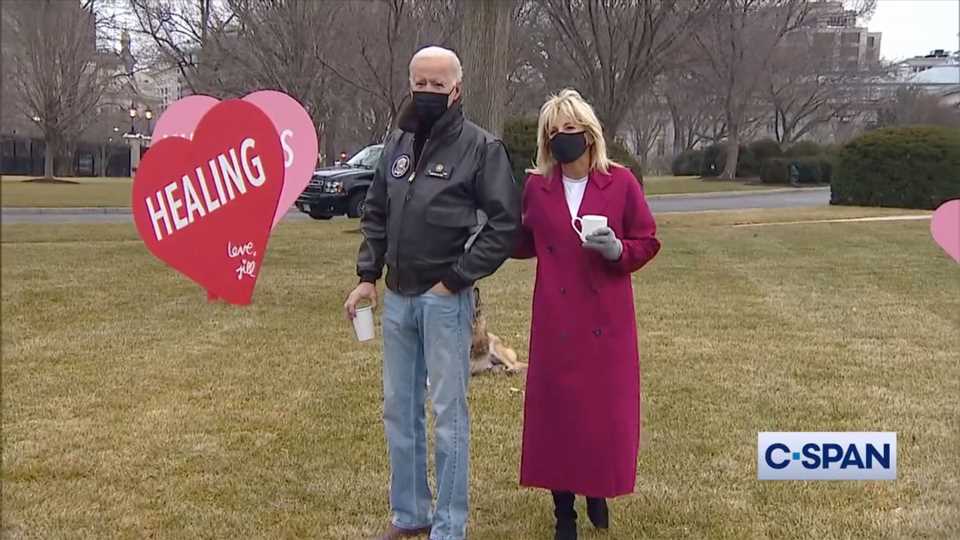 Joe and Jill Biden took an unscheduled stroll of the White House's North Lawn on Friday morning to tour the pop-up decorations that had been placed there ahead of Valentine's Day.

The president and first lady, with cups of coffee and their dogs Champ and Major, viewed the pop-up decorations, which were comprised of oversized pink, white and red hearts with words such as "healing," "strength," "compassion" and "unity" printed on them.

Some of the hearts also included "Love, Jill," a message from the first lady, 69.

The decorations were installed where White House reporters' film their live shots and therefore meant to be viewed by the American people.

Asked by reporters about his gift to his wife for Valentine's Day, President Biden, 78, noted that it was too early to disclose, still two days ahead of the holiday which was the first lady's "favorite."

"It's not Valentine's Day, I'm not telling you," he joked about his plans.

Asked what she hoped the American people would take from the White House valentines, the first lady said she wanted to provide hope and joy amid the novel coronavirus pandemic.

"I think things have been — with the pandemic — just, everybody's feeling a little down, so a little joy, a little hope," Mrs. Biden told reporters. "That's all."

The president also used the tour to share a memory about a Valentine's Day during his first year as vice president, under former President Barack Obama. "I walked into my office and every single pane in the vice president's office … 18 panes in each window … [contained painted] little hearts that said: 'Joe loves Jill.' None of them said 'Jill loves Joe.' " he said.

He also spoke of his "great love affair" with his wife — which has weathered decades in the spotlight — telling reporters it was important that the American people know "there is hope."

"You just have to stay strong," the president said. "A lot of people have gone through terrible suffering. Lost their families; lost their children. Lost their husbands, wives, moms, dads. And it's almost unbearable. The one thing I can say to them is that: 'They're still in your heart.' "

"We hope this lifted your spirits," the first lady added.

Before heading back in the White House, the president gestured to their youngest dog, Major, which he said the couple brought into their home in an effort to keep their older dog, Champ, as vibrant as possible: "We asked the vet, 'What can we do to keep Champ going?' He said, 'Get him a young dog.' " Never miss a story — sign up for PEOPLE's free weekly newsletter to get the biggest news of the week delivered to your inbox every Friday.

The president and first lady's love story is one of enduring support as well as heartbreak. The president's first wife, along with his 9-month-old daughter, were killed in a car crash in 1972, and son Beau died of brain cancer in 2015.

In a recent interview with PEOPLE — their first as president and first lady — the Bidens spoke of their 43-year marriage, which they said strengthened their work and their lives.

"Jill came along at a really important point and put my family back together. She's the glue that held it together, and I knew that I wanted to marry her shortly after I met her. … It's not that we don't fight and argue sometimes. I'm just lucky," the president said.

Dr. Biden, with a laugh, echoed that: "Well, after 43 years of marriage there's really not that much more to fight about."