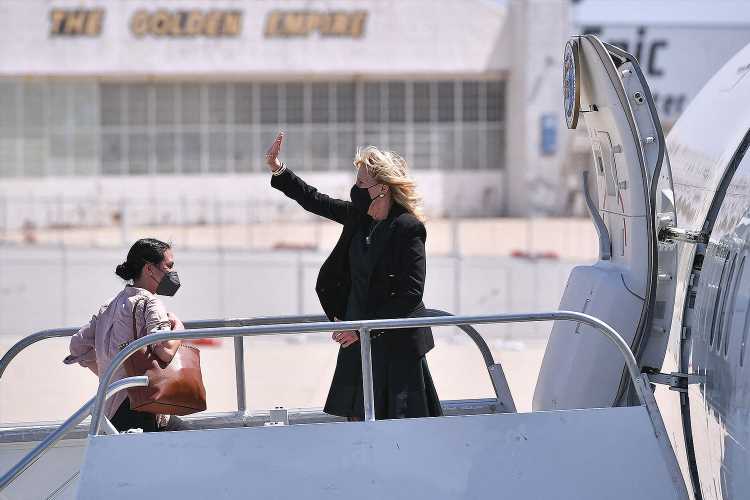 First Lady Dr. Jill Biden was in full April Fools' Day spirit on Thursday, fooling her staff and reporters aboard a flight home by going incognito, as an attendant, to pass out treats.

According to reporters with her, the prank took place on the trip back from California, where Biden had delivered remarks to a farmworkers' union earlier in the day.

After the press and Biden — wearing a dark dress, jacket and face mask — boarded the plane and took off, they settled in for the in-flight meal service.

After the meal, according to the traveling pool, "a flight attendant with short black hair — wearing a black pants suit, black face mask and a name badge reading Jasmine — walked through the staff, Secret Service and press cabins passing out Dove ice cream bars."

Roughly five minutes after distributing the sweet treats, "Jasmine" reappeared in the press section of the cabin, this time sans wig, revealing her true identity: that of the first lady of the United States.

"April Fools," Biden told reporters, who were "totally fooled" as were the White House staffers on-board, none of whom were seemingly wise to the disguise. Biden's press secretary ,Michael LaRosa, and senior adviser Anthony Bernal told reporters they were "just as surprised when 'Jasmine' revealed her true identity to them," the pool reported.

Biden — at that point "laughing and visibly pleased with her prank" — then returned to her cabin for the remainder of the flight.

The Thursday prank wasn't the first lady's first aboard an aircraft.

In 2014, her husband — then-Vice President Joe Biden — told talk show host Rachael Ray that April Fools' Day is "like a tradition" for his wife.

President Biden continued then: "And what I worry about when I wake up on April Fool's Day is: What in the hell is Jill gonna do this time? You think I'm joking. I am not joking."

He added that some of the pranks have made him feel "so stupid," elaborating on one, in particular, that took place aboard Air Force Two.

The first lady has an affinity for holidays in general, with her husband telling reporters in February that Valentine's Day was her "favorite."

The two took an unscheduled stroll of the White House's North Lawn on Feb. 12 to tour pop-up decorations that had been placed there in honor of the holiday.

During the tour, the first lady told reporters she wanted the decorations — oversized pink, white and red hearts with words such as "healing," "strength," "compassion" and "unity" printed on them — to provide hope and joy amid COVID-19.

"I think things have been — with the pandemic — just, everybody's feeling a little down, so a little joy, a little hope," Dr. Biden told reporters. "That's all."

The Matt Gaetz Sex Scandal Has It All!