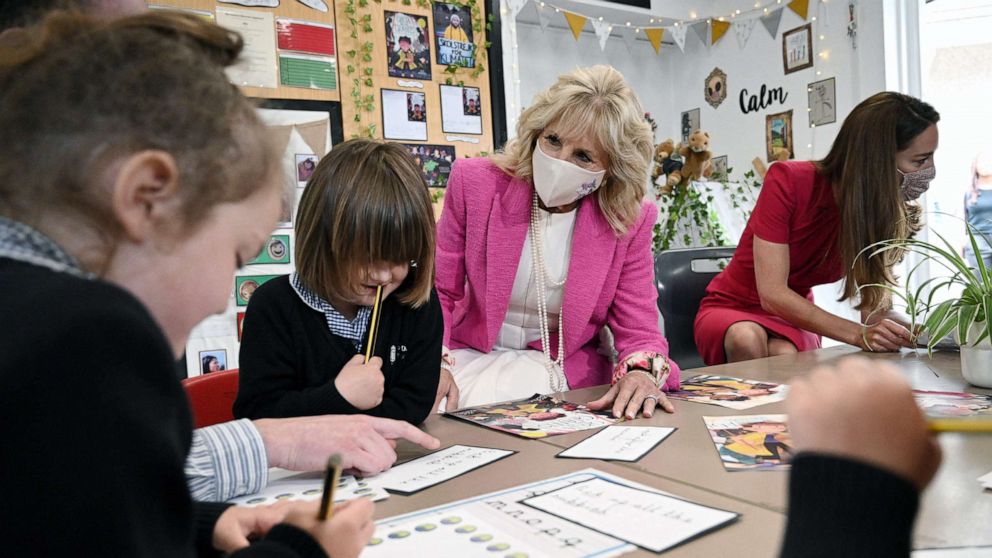 First lady Jill Biden and Kate Middleton on Friday visited a school in Cornwall, the site of the G-7 summit, to put a focus on the importance of early childhood education.

Biden, a longtime teacher, and the Duchess of Cambridge toured the state-funded Connor Downs Academy, which works with students who have experienced trauma in their lives.

They walked in wearing face masks, but were the only ones wearing them inside.

The two women chatted with the students, ages 4-11, asking them about the projects they were working on and the students, all wearing uniforms, showed off their work.

They were told by the teacher that the students were learning about how to make the world a better place and how to sound out words and write sentences.

Biden seemed very much in her element, sitting down with students who were reading “Greta and the Giants,” working on math and drawing.

Biden and Middleton sat at three different tables during their time inside and at the final one, where their teacher said they were learning about the White House and Kensington Palace, Biden picked up a photo of the White House and leaned over to a young girl to point out where her bedroom is.

Asked how important early childhood education is, especially in a pandemic, Biden answered, “It’s the foundation of everything. I can tell you that as a teacher at the upper levels, if they don’t have a good foundation, they fall so far behind. So, this is amazing to see what these children are doing and how far advanced they are at 4 or 5 years old. It’s impressive.”

Later, Biden and Middleton went outside with a tray of carrots so the the students could feed one of the school’s five rabbits they take care of, named Storm.

They then listened to a roundtable of educators from the U.K and others from the U.S., participating virtually, in a discussion that focused on mental health, early childhood development and including parents involved earlier in their schooling.

“As an educator myself, so much of what you’re saying has certainly touched my life,” Biden said, reflecting on the years she spent teaching at a psychiatric hospital.

“Early childhood education is so important to lay the foundation for all of our students,” she said, and thanked the Duchess for inviting her.

Middleton said it was a “huge honor” to have Biden in the United Kingdom and thanked her for her interest in early childhood education.

“I have a million questions written down here,” Biden said, as the event was ending. “I had so many things that I wanted to ask about, but I guess I’ll have to just come back.”

A Guide to Ranked-Choice Voting in New York City: How It Works, What It Means, and How to Optimize Your Ballot