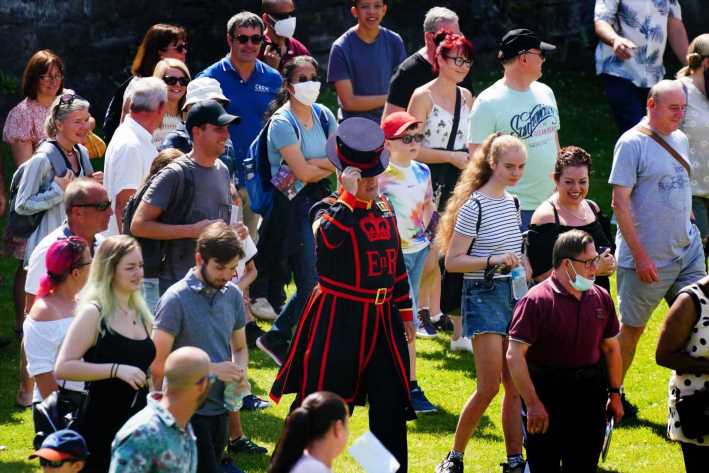 'It's a gamble': England's 'big bang' easing of Covid rules could go either way, experts note

Criticism is mounting on Prime Minister Boris Johnson and his government for the decision to go ahead with the lifting of Covid-19 restrictions in England this week, with the world now watching to see which direction the country's health crisis goes next.

From Monday, there will be no more limits on indoor gathering which means that nightclubs can reopen and bars and pubs will no longer have to provide only a table-only service.

In addition, the 1-meter social distancing rule has been removed and face masks have become largely voluntary, although some airlines and transport companies have said they will retain mask-wearing requirements.

The fanfare around a day previously touted as "Freedom Day" has been muted from the government, however, as it comes amid a surge in Covid infections caused by the delta variant. The government has urged caution and for people to take a sense of personal responsibility when it comes to their newly regained freedoms.

The lifting of restrictions had already been moved from June 21 to allow for more vaccinations to take place amid the surge in infections.

The lifting of restrictions has drawn criticism from many medical experts and opposition politicians amid concerns that hospitalizations and deaths, while relatively low for now, could quickly rise if cases increase further.

Ed Davey, the leader of the opposition Liberal Democrats party in the U.K., was among those criticizing the move calling it a "gamble" by the Conservative government.

"We want our freedoms back, of course we all want them back, but we have to be sensible. I'm particularly worried about clinically vulnerable people, the fact that the government isn't making mask-wearing on public transport mandatory means that many of these clinically vulnerable people won't be able to have any freedom at all … because they won't feel safe on public transport," he said.

"So this is the balance for the freedom of people to be able to go to nightclubs, as much as everybody wants some fun, you're taking away the freedom of other people. I just fear this big bang, this gamble that Boris Johnson is taking, isn't getting that balance right."

David Miles, professor of financial economics at Imperial College and former member of the Monetary Policy Committee at the Bank of England, told CNBC that the situation could go either way now.

"Everything now depends on how the infection plays out across the country. You could imagine different scenarios. In an optimistic one, the infection rates, which have been running very high, level off and then begin to drop back so by the time we move into the fourth quarter the infections are coming down sharply … there's a surge in confidence and we get [a] very strong economic bounce back."

"That's certainly possible and if that's how it plays out then people will say the government was absolutely right," he said.

But, at the other end of the spectrum, Miles noted, "the numbers infected keep rising to … 100,000 a day and hospital admissions begin to rise, they've already been rising, and the death rate also begins to move up, and on the back of that people remain very nervous … and we're back, at the end of the year, in a very difficult situation and an economic recovery goes into reverse."

Miles said he didn't know which scenario was more likely. "I think it's extremely difficult for the government to know what the right strategy is here," he said.

An exciting day for others

While experts hold concerns over the lifting of restrictions, for many people the relaxation of rules is a sigh of relief after months of lockdowns, job uncertainty and, in many cases, loneliness. Those in favor of lifting restrictions note that there are many damaging consequences to remaining locked down, from the impact on the economy and livelihoods to mental health.

Lifting restrictions in the summer could also lighten the burden on the National Health Service when the winter comes too, the government hopes. Johnson has often repeated the mantra recently of "if not now, then when" in reference to lifting the restrictions, urging the public "to learn to live with" the virus.

Businesses sorely impacted by lockdowns are certain to welcome the removal of restrictions in the hope that footfall increases.

London Mayor Sadiq Khan, a member of the opposition Labour party and often a vocal critic of the government's actions during the pandemic, said that Monday was an "exciting" day for London's businesses.

"Today is exciting because many of the restrictions that we've had to deal with over the last 16 months are being relaxed and that's really important not least because many of our businesses — particularly in hospitality, culture, retail and the night-time economy — that rely on footfall have really struggled."

"But what we're saying to Londoners and those coming to London is 'please be cautious.' If, for example, you can't keep your social distance indoors think about wearing a facemask and follow the normal rules like good hygiene."

Khan noted that over 9.9 million vaccine doses had been administered in London and more than three quarters of all over-40s had been double-vaccinated with younger people now the main target for immunization.

Sex predator who arranged to rape girl, 4, and for child to urinate in glass for his consumption is jailed
Technology