Three IRGC fast-attack ships and a larger support vessel swarmed the US Coast Guard cutters Monomoy and Wrangell while they were on patrol in international waters on April 2.

During the incident, the large Iranian support ship crossed repeatedly in front of the US vessels, at one point coming within 70 yards of the Wrangell and forcing the cutter to take evasive maneuvers to avoid a collision.

The US vessels sent repeated warnings via bridge-to-bridge communications, but the Iranian ships did not alter their behavior and continued to maneuver in an unsafe manner around the two Coast Guard ships.

The IRGC ships finally withdrew after three hours of “unsafe and unprofessional” behavior, Cmdr. Rebecca Rebarich, a spokeswoman for the Navy’s 5th Fleet, told The Journal.

The last incident like this was in April 2020, when 11 IRGC boats “conducted dangerous and harassing approaches” toward US Navy and Coast Guard ships conducting operations in international waters.

During that incident, which lasted about an hour, one of the Iranian vessels came within 10 yards of one of the Coast Guard cutters.

The US Navy’s 5th Fleet said in a statement at the time that “the [IRGC Navy’s] dangerous and provocative actions increased the risk of miscalculation and collision.” 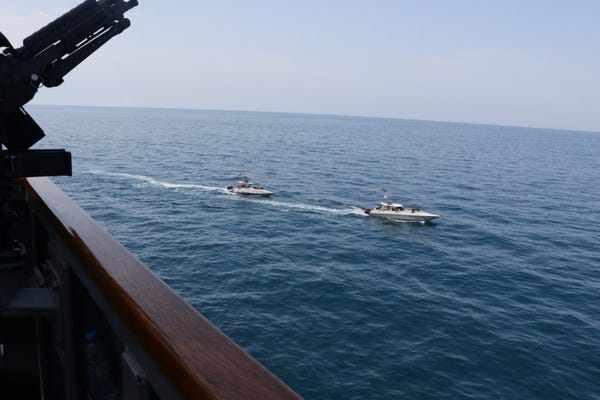 In response, then-President Donald Trump tweeted that he had ordered the US Navy to “destroy” Iranian gunboats that “harass our ships at sea.” He then doubled down in a White House press conference, saying that the Navy would “shoot them out of the water.”

Asked about rules of engagement for the US military, Pentagon leaders said Trump’s statement was a warning and that the military would determine how best to apply the “direction from the commander-in-chief into lawful orders that we execute.”

The latest incident of harassment, an apparent first for the Biden administration, occurred the same day that the US State Department revealed that the US planned to hold indirect talks on potentially re-entering the 2015 Iran nuclear deal from which the previous administration withdrew, much to Iran’s dissatisfaction.

Although it is unclear what the IRGC’s intentions were in its interactions with the US Coast Guard this month, a leaked audio recording of Iran’s foreign minister surfaced Sunday with complaints about the IRGC’s interference in diplomacy, to include efforts to undermine the nuclear deal.

As The Journal noted, it is unclear if the IRGC Navy’s actions in the Gulf were directed by Tehran or if the force was acting on its own, as has sometimes been the case in the past.