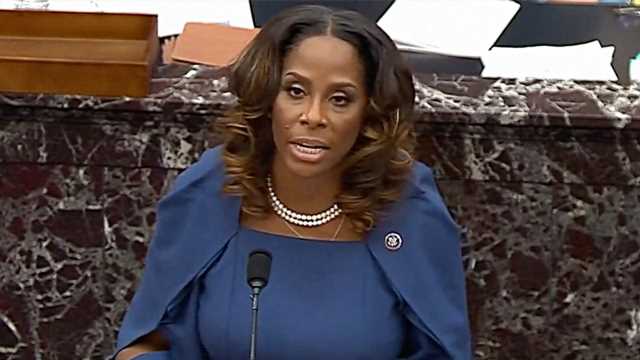 Michael Van Der Veen, attorney for former President Trump, shows video of Democratic politicians using fighting language in the past to make a point that Trump’s words before the Jan. 6 Capitol riot were no different.

Stacey Plaskett, one of the House impeachment managers, called out former President Trump’s defense team for focusing on “Black women like myself” in their video montages during the impeachment trial.

Plaskett, a delegate from the U.S. Virgin Islands, paused from answering a legal question from senators to bring up team Trump’s videos of Democrats engaged in hot rhetoric in the past.

They were “playing clip after clip of Black women talking about fighting for a cause or an issue or policy,” Plaskett told the Senate Friday. “It was not lost on me that so many of them were people of color, and women, Black women — Black women like myself who are sick and tired of being sick and tired for our children.” 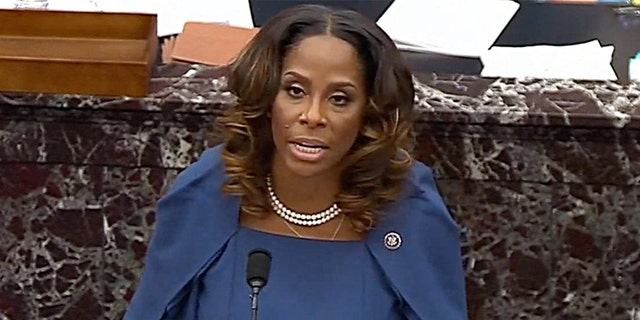 Del. Stacey Plaskett, a Democrat from the U.S. Virgin Islands.

The Trump team’s videos that were on repeat during their presentation featured Rep. Maxine Waters, D-Calif., prominently, as well as Vice President Kamala Harris and Rep. Ayanna Pressley, D-Mass., in trying to make a point that Democrats have a history of incendiary comments that should be considered impeachable under the new standard they are trying to apply to Trump.

Plaskett referenced the Black Lives Matter protests that took hold last summer in the response to the death of George Floyd in Minneapolis and implied that Black people speaking out for justice is not equivalent to Trump’s effort to incite a Capitol insurrection.

TRUMP’S IMPEACHMENT DEFENSE RESTS AFTER THREE HOURS: ‘THERE WAS NO INSURRECTION’

“This summer, things happened that were violent,” Plaskett said. “But there were also things that gave some of us Black women great comfort — seeing Amish people from Pennsylvania standing up with us. Members of Congress [standing] up with us.

“I thought we were past that. I think maybe we’re not.”

WHO ARE THE DEMOCRATIC TRUMP IMPEACHMENT MANAGERS?

Democratic impeachment managers argued Trump’s impeachment is not just for one speech he made on Jan. 6, but for spending months casting doubt about the election and then summoning his supporters to Washington to attack the Capitol to stop the counting of Electoral College votes for President Biden.