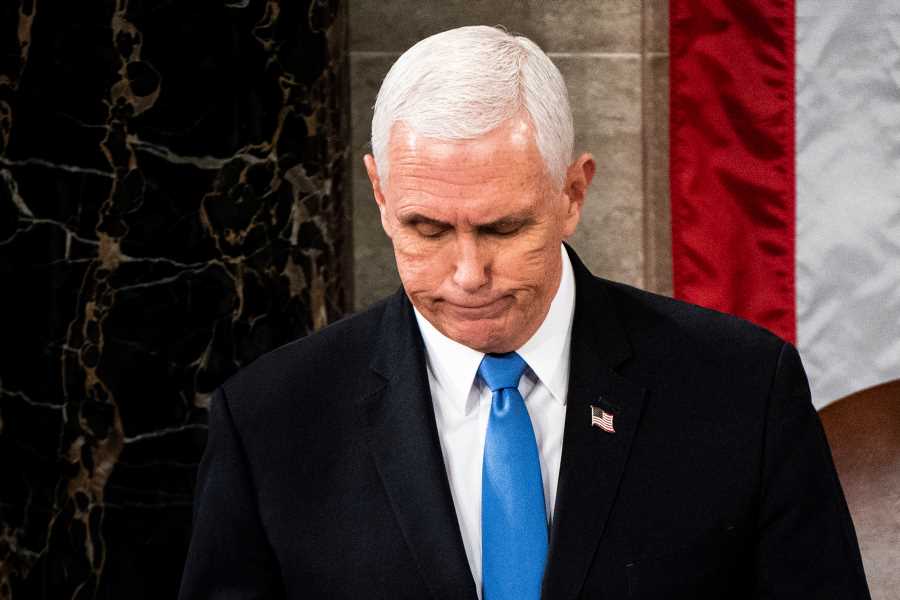 I Stayed Up Past Midnight to Watch Mike Pence Eat Shit, and It Was Beautiful

Mike Pence sowed the wind on July 15th, 2016, signing on to become the running mate of a man manifestly unfit to sit in the White House.

More than any other Republican, Michael R. Pence is complicit in norm shattering, democracy shaking rule of Donald J. Trump. The stalwart religious conservative, a former hard-right radio host, congressman and governor, hitched his wagon to Trump’s reality star. He made his peace with Trump’s profane, narcissistic core early, responding to Trump’s Access Hollywood/”Grab ’em by the pussy” scandal by lashing himself to the mast and riding out the storm. There’s been little daylight between Pence and the chaos president since. Pence stood by Trump through the Muslim ban and family separation at the border; through Stormy Daniels, Michael Cohen, and the Mueller probe of Russian interference in the 2016 campaign; and through Trump’s mob-boss threats to the president of Ukraine that finally got him impeached. Pence then signed on for more, seeking reelection with Trump, even as the pair catastrophically mismanaged a once-in-a-century pandemic that’s now killed more than 350,000 of our fellow Americans.

After losing in November to Joe Biden and Kamala Harris, Pence attempted to fade into the woodwork, staying manifestly silent as Trump spun up baseless conspiracy theories about having been robbed of rightful victory — by a “fraud” inconceivably perpetrated across half-a-dozen swing states, governed variously by Democrats and Republicans, in geographies ranging from the Desert Southwest, to the Rust Belt, to the New South. He stayed quiet, too, as Trump attempted to twist arms of local Michigan officials to block the lawful certification of election results, and said nothing as recordings surfaced of Trump telling GOP election officials in Georgia to “find 11,780 votes” and overturn Biden’s victory there.

Pence seemed, cowardly, to hope that Trump’s assault on democracy would burn itself out. But on Wednesday, the constitution put Pence in the path of his partner’s fury. As vice president, and president of the Senate, Pence was tasked with presiding over the official federal count of Electoral College votes previously certified by the respective states. The constitution and federal law carved out for Pence only ceremonial duties in observing and pronouncing the final tally. But in Trump’s unhinged autocratic mind, Pence could unilaterally subvert the will of the states, and of the 81,281,502 Americans who voted for Joe Biden. “If Vice President @Mike_Pence comes through for us,” Trump tweeted on Tuesday, January 5th, “we will win the Presidency.”

When faced with a choice between backing Trump and attempting to install the 45th president as America’s first dictator, or upholding his oath to the constitution and performing his perfunctory duties, Pence finally found a bridge he could not cross. On Wednesday morning, Pence released a statement insisting that his oath to the constitution, sworn to God, tied his hands. He described himself as lacking “unilateral authority to determine which electoral votes should be counted and which should not.” He added, with trademark religious preening, “I took an oath to support and defend the Constitution which ended with the words ‘so help me God.’ Today I want to assure the American people that I will keep the oath I made to them and I will keep the oath I made to Almighty God.”

Trump — seeing himself as Pence’s only higher power — was enraged by what he perceived as disloyalty. And he took that rage to the MAGA rally outside the White House, where he whipped up the fury of his loyalists, and directed them to march on the Capitol.

Trump — who vowed in the 2020 campaign to enforce “law and order” and promised to protect Americans against “the mob” — had turned his own mob on a co-equal branch of government, on the Capitol Building where the previously servile Pence was presiding in the Senate, as it debated unfounded objections to the certified vote totals from Arizona.

The moment was both Shakespearean, and profoundly dangerous. As the mob, carrying Confederate and TRUMP flags, breached police barricades and swarmed the Capitol building, lawmaker lives were in mortal danger, as too was the American experiment. Pictures have surfaced of armed militants inside the halls of Congress on with zip ties, as though some in the raiding party had hoped to take hostages. A gallows had been erected outside the Capitol.

With considerable luck, members of the Congress and the Vice President were spirited out of harm’s way. The haphazard coup attempt devolved into a short-lived, vandalism-filled occupation. After watching his backers run riot, Trump released a video proclaiming his “love” for the militants. He repeated his baseless claim to electoral victory, before telling everyone to “go home.” America’s Capitol had been defiled, with doors broken, windows shattered, and offices ransacked. The death toll stood at four: one woman dead by gunshot, three others by medical event.

Long after dark, Pence and members of both Houses returned under heavy security resume their constitutionally mandated business.

Normally, the sight of a defeated Vice President presiding over the count that makes his own loss official is poignant. But this wasn’t Al Gore swallowing his grievance and his hurt to declare George W. Bush the victor of the 2000 election, or even Walter Mondale making light of his and Jimmy Carter’s landslide loss to Ronald Reagan in 1980. This was just deserts for a man who thought he could ride a tiger, and at last felt the wrath of its claws.

An old friend of Pence’s, Sen. James Inhofe (R-Oklahoma), related the Vice President’s despairing state of mind to the Tulsa World newspaper. “I’ve known Mike Pence forever,” Inhofe said. “I’ve never seen Pence as angry as he was today. I had a long conversation with him. He said, ‘After all the things I’ve done for (Trump).’”

Presiding over the joint session, Pence looked dead inside. His polished voice — honed over decades in radio and public office — carried on as if on autopilot. Using the arcane incantations of a centuries-old ceremony, Pence introduced the Electoral College vote certificates from each state, and then queried the joint session for objections, after each count had been read aloud by designated members of Congress.

Pence, carefully citing U.S. Code, declined to entertain objections to the counts from Georgia and Nevada that were lodged by House members who sheepishly acknowledged that their Senate co-sponsors had backed out, after the violence of earlier in the day. An objection to the count from Pennsylvania did receive a Senate second — and occasioned a break in the joint session, and an hours-long delay of the inevitable, as the House and Senate met separately to debate and ultimately vote down the objections.

Ultimately, the counting resumed, until at last, at 3:31 a.m. local time, the reading of the certificate from Vermont, with its three votes, put the official tally for the Biden/Harris ticket past the pivotal 270 mark. Pence marked moment with five seconds of dead air, before proceeding with a clearing of his throat to the certificate from the Commonwealth of Virginia. With finality, at 3:40 a.m., Pence brought the disgraceful business of the 2020 election to its constitutional conclusion by reciting the final count.

Before he gaveled the proceedings to a close, Pence turned to Senate chaplain Barry Black for a prayer.

Black’s words cut deep even as they avoided the name of Trump and his longtime vice presidential enabler: “These tragedies have reminded us that words matter, and that the power of life and death is in the tongue,” Black said. He then praised God for having strengthened “our resolve to protect and defend the Constitution of the United States against all enemies — domestic as well as foreign.”

Mitch McConnell slams ‘shocking failures’ of security at US Capitol

Can Julian Assange ‘save’ Nirav Modi from being extradited?
Technology