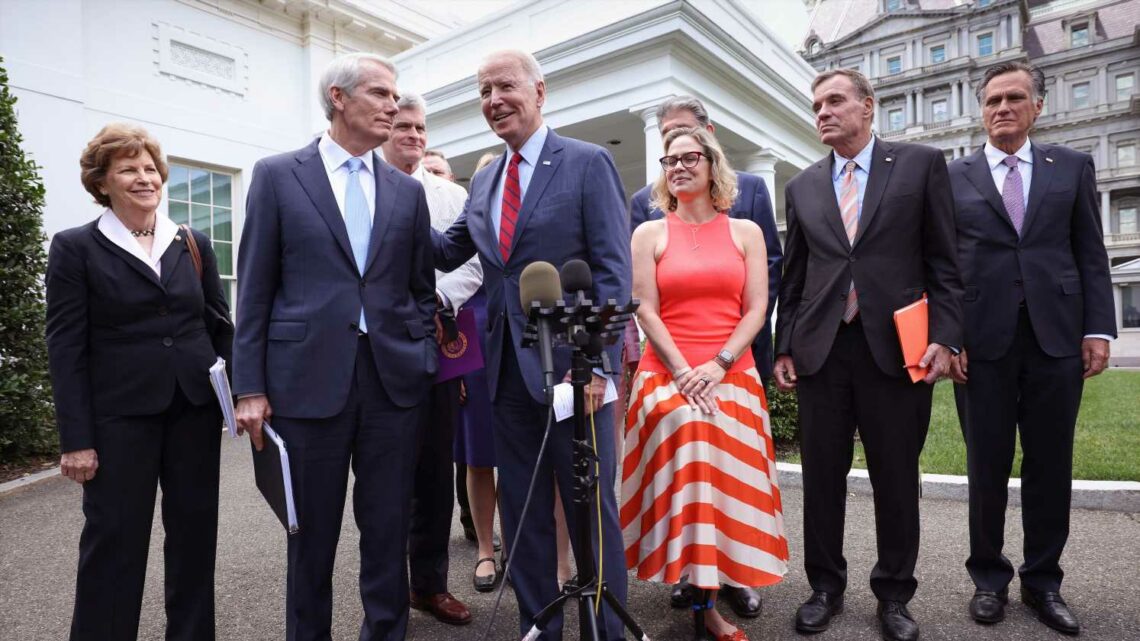 ‘I do trust the president’: Senators scramble to save bipartisan infrastructure deal

WASHINGTON – Only days after President Joe Biden reached a would-be deal with a bipartisan group of senators on infrastructure, lawmakers were racing to save the package from potential collapse.

Sen. Joe Manchin, D-W.Va., stressed to ABC News’ “This Week” there is “absolutely” still a bipartisan deal in Congress that Biden will sign.

“This is the largest infrastructure package in the history of the United States of America,” the West Virginia Democrat said. “There is no doubt in my mind, never has been a doubt in my mind, that (Biden) is anxious for this bill to pass and for him to sign it.”

The deal, initiated by a bipartisan group of 10 senators that later swelled to a group of 21, was endangered almost immediately after its announcement Thursday evening, after comments Biden made in a news conference on the deal angered Republican senators.

The deal spends $1.2 trillion on mostly traditional infrastructure, including transportation, energy, water and telecommunications systems, among other things, over eight years.

“I was very glad to see the president clarify his remarks because it was inconsistent with everything that we had been told all along the way. We were all blindsided by the comments the previous day, which were that somehow these two bills were connected,” Sen. Rob Portman, R-Ohio, said on ABC News’ “This Week.”

Portman, one of the leading negotiators on the deal, added Republicans “were glad to see them disconnected. And now we can move forward.”

“The president’s other effort was never linked to the infrastructure effort,” Sen. Mitt Romney, R-Utah, told CNN’s “State of the Union” on Sunday. When asked whether he took Biden’s backtracking in good faith, Romney said, “I do trust the president.”

‘So what’s next?’: After voting rights loss, Democrats and allies seek alternatives

Democrats try to tie together 2 bills

Many congressional Democrats, including House Speaker Nancy Pelosi, made clear during negotiations that a bipartisan infrastructure deal was possible only if it was coupled with another package that targeted the party’s other priorities, such as family and labor policy, as well as climate change.

In his remarks Thursday, Biden said, “if this (bipartisan deal) is the only thing that comes to me, I’m not signing it.”

Sen. Bill Cassidy, R-La., said he was “blindsided” by the comments, and Sen. Lindsey Graham, R-S.C., called the move “extortion.”

“I’m not doing that. That’s extortion! I’m not going to do that. The Dems are being told you can’t get your bipartisan work product passed unless you sign on to what the left wants, and I’m not playing that game,” Graham told Politico.

In a statement Saturday, Biden walked back his comments, noting they “understandably upset some Republicans” and they gave the “impression that I was issuing a veto threat on the very plan I had just agreed to, which was certainly not my intent.”

“I gave my word to support the infrastructure plan, and that’s what I intend to do. I intend to pursue the passage of that plan, which Democrats and Republicans agreed to on Thursday, with vigor. It would be good for the economy, good for our country, good for our people. I fully stand behind it without reservation or hesitation,” the president said.

Biden also acknowledged Republicans will try to stop the Democrats’ larger package from passing, an effort he made clear he believes is misguided. The president also said he believes Democratic efforts to scuttle a deal some may see as inadequate is also the wrong strategy.

“I intend to work hard to get both of them passed because our country needs both – and I ran a winning campaign for president that promised to deliver on both. No one should be surprised that that is precisely what I am doing,” the statement reads.

Fact check: Claims about WHO guidance for vaccinating children are missing context

On Sunday, Republican lawmakers still seemed receptive to the possibility of a deal while stressing that a second package was not a possibility.

Cassidy also argued “there’s bipartisan opposition to non-hard infrastructure in both chambers of Congress,” highlighting the disagreements lawmakers have over what can reasonably count as infrastructure.

“Republicans are going to support true infrastructure that doesn’t raise taxes,” Romney said on CNN, a point where he said he trusted Biden “at his word.”

Sen. Lisa Murkowski, R-Alaska, continued to promote her support for the package on Sunday without any mention of the anger from her colleagues.

Some Democratic lawmakers, meanwhile, continued to support the president’s bill while urging restraint from within their party.

“If they think in reconciliation I’m going to throw caution to the wind and go to $5 trillion or $6 trillion when we can only afford $1 trillion or $1.5 trillion or maybe $2 trillion and what we can pay for, then I can’t be there,” Manchin told ABC News.

The formula of the 'Furious'
Technology