Here’s How Most Americans Really Feel About Wearing Face Masks

Most Americans consider wearing a mask near others a sign of respect and a matter of public health, a new HuffPost/YouGov poll finds.

In recent weeks, President Donald Trump and Vice President Mike Pence’s frequent eschewal of masks, combined with a few high-profile incidents of public protest, have seemingly threatened to turn the issue into another front for partisan hostilities. But public opinion on masks, like other aspects of the coronavirus crisis, doesn’t fit neatly into the hyperpolarized framework that defined past political battles over issues like impeachment.

There are still significant partisan and demographic divides, but they’re not so pronounced as to leave the two parties diametrically opposed. Rather, the gap is a matter of degrees, with a broad majority of Democrats and a more modest majority of Republicans offering support for masks and rejecting the idea that wearing them is a pointless practice or a sign of weakness.

Americans say, 62% to 29%, that deciding to wear a face mask is more a matter of public health than a matter of personal choice, the survey finds.

A 45% plurality say they feel that wearing a face mask protects the person wearing it and others equally, with 31% saying it mostly protects others from germs the wearer may be carrying. Just 9% say it serves mainly to protect the person wearing it, and just 8% that it offers no benefits at all. 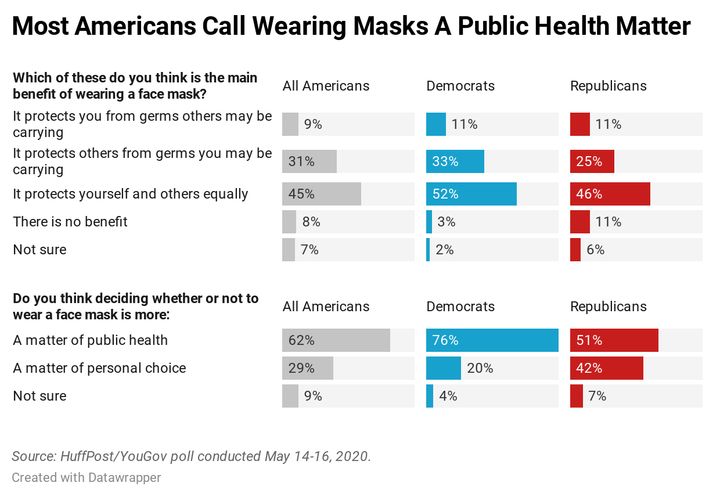 Relatively few Americans say that they’re always wearing a mask or other face covering outdoors, with even fewer saying that they’re never doing so.

About two-thirds say they always or mostly wear a face mask or other covering when they’re in public and near other people (while grocery shopping, for instance), with another 23% saying they do so only once in a while or not at all, and the rest saying they haven’t faced such a situation. In situations where they’re in public but not coming near others (say, taking a walk somewhere quiet), 46% say they mostly or always wear masks, and 46% that they rarely or never do, with the rest staying inside entirely. 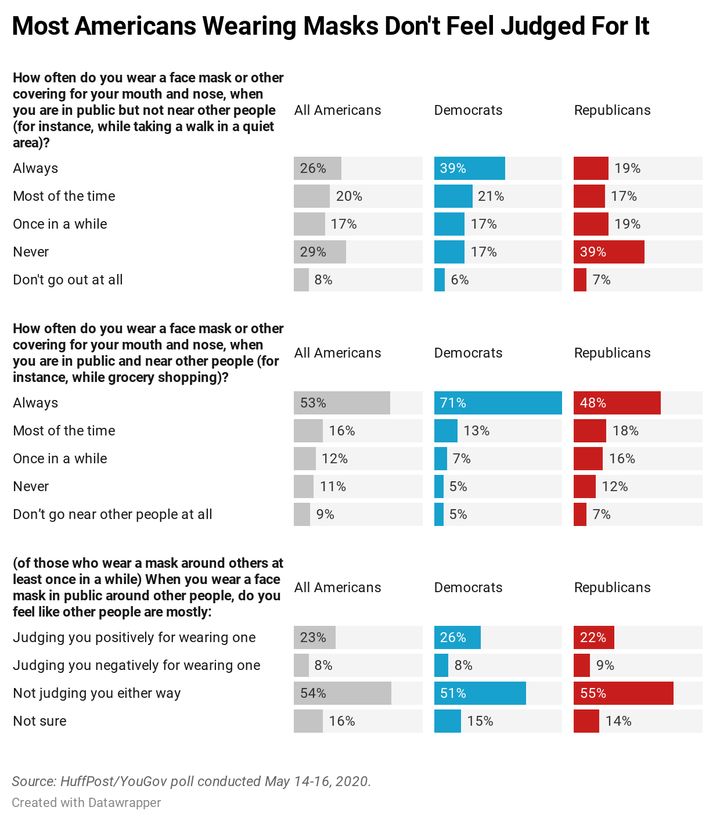 These numbers deserve a few caveats: They rely on Americans’ self-reports of their own behavior, and their own definitions for “most of the time.” They’re also potentially subject to social desirability bias ― people may be inclined to overreport (or underreport) their mask-wearing if they feel as though their actual behavior isn’t quite in line with what others think they should be doing.

Americans say, 69% to 19%, that it’s a sign of respectfulness to wear a face mask when in public and near other people. Just 8% see wearing a mask as a sign of weakness, with 83% rejecting that interpretation. 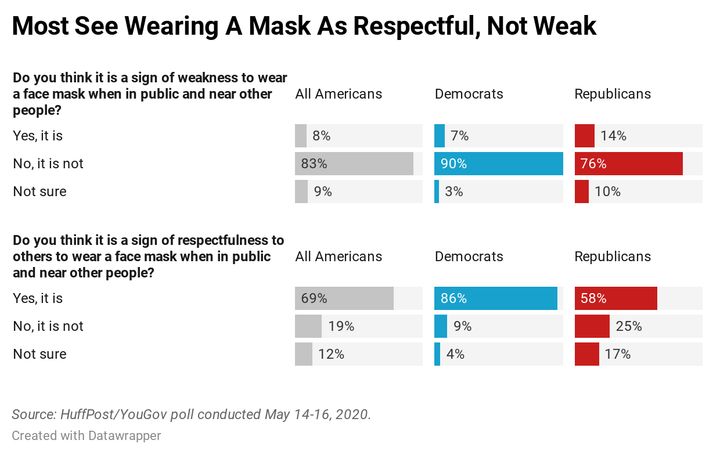 A 63% majority of Americans say that Trump and other government officials should wear face masks when they’re in public and near other people. Just 7% say that they shouldn’t do so, with the rest unsure or without an opinion.

Even after controlling for partisanship, there are a few significant gender divides around mask-wearing. Democratic women are 23 points likelier than Democratic men to say they always wear masks when outside around others, and 9 points likelier to say they always wear them when outside but not near others. But there’s little gender difference within the party on most other questions, including how they feel they’re being perceived by others while wearing masks.

Republican women are 14 points likelier than Republican men to say they always wear masks when outside around others. Twenty percent of Republican men also say they consider wearing a face mask in public near others to be a sign of weakness, compared to just 6% of Republican women (and similarly single-digit shares of Democrats across gender) who say the same. Even within that group, however, it’s still the minority position. By contrast, a 62% majority of GOP men say mask-wearing shows respect, and more than half say they consider it a matter of public health.

There are also some geographical divides. People who live in cities or suburbs report more frequent mask-wearing than do those living in towns or rural areas, and are more likely to see the issue as a public health matter. About a third of city-dwellers who wear masks around others also say they feel positively judged by others for doing so, compared to a fifth or less of those living in less dense areas.

Use the widget below to further explore the results of the HuffPost/YouGov survey, using the menu at the top to select survey questions and the buttons at the bottom to filter the data by subgroups.

The HuffPost/YouGov poll consisted of 1,000 completed interviews conducted May 14-16 among U.S. adults, using a sample selected from YouGov’s opt-in online panel to match the demographics and other characteristics of the adult U.S. population.

HuffPost has teamed up with YouGov to conduct daily opinion polls. You can learn more about this project and take part in YouGov’s nationally representative opinion polling. More details on the polls’ methodology are available here.