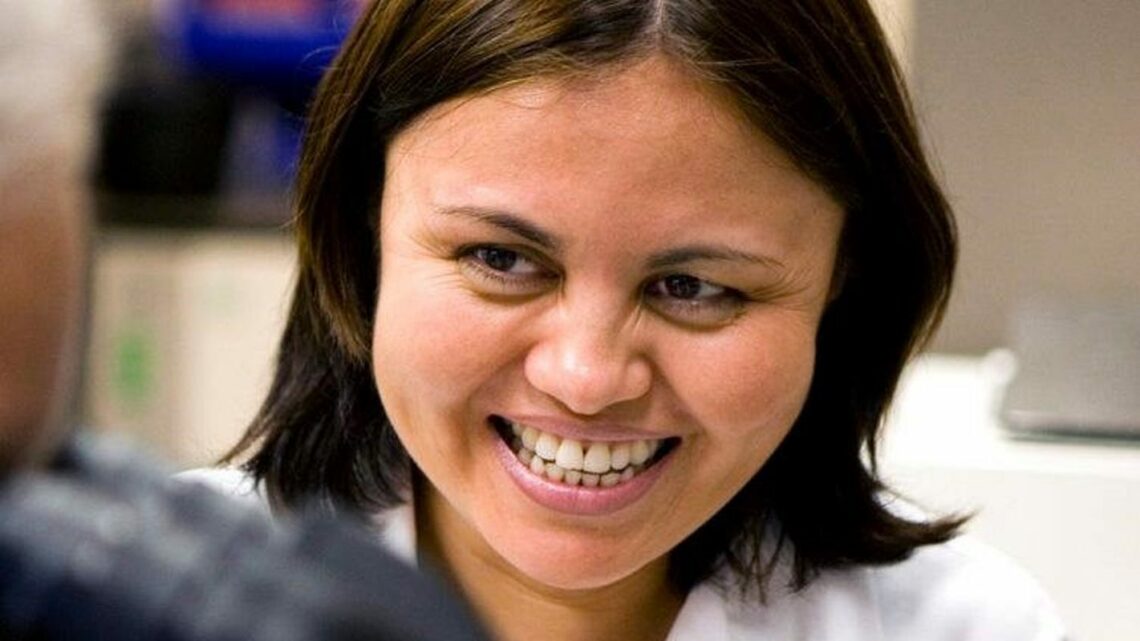 Her Uyghur friend disappeared. Now this Boston woman is on a mission to draw attention to China’s ‘genocide’

WASHINGTON – About five years ago, a doctor and medical researcher named Imamjan Ibrahim left Boston for Xinjiang, China, to visit his parents. He never returned.

Now, friends and acquaintances fear the 35-year-old Ibrahim has been swept up in China’s massive detention and imprisonment campaign targeting the Uyghurs and other ethnic minorities who populate the country’s western region.

“It’s been a long four years as I’m searching for my friend,” said Maya Mitalipova, a Uyghur-American and biomedical researcher with MIT’s Whitehead Institute.

Mitalipova’s quest to find Ibrahim echoes those of other Uyghur-Americans and advocates fighting to bring attention to what the U.S. government now says is a “genocide” by the Chinese government against the Uyghurs.

Mitalipova, who immigrated to the U.S. from Kazakhstan, said she befriended Ibrahim soon after he came to Boston in 2010 and encouraged him as he sought a research fellowship at the city’s Beth Israel Deaconess Medical Center. She spoke to USA TODAY via phone and email.

“I became his older sister,” she said. “After long several years of study and preparing and passing medical exams in the U.S., Imamjan finally got (the) fellowship … It was his dream.”

But he needed to get an H1B work visa, something foreigners can only do at a U.S. consulate abroad. So he traveled to Kashgar, a city in Xinjiang and once a major trading stop on the ancient Silk Road.

Before he could return to the U.S., Mitalipova says Chinese officials confiscated his passport. Her account could not be independently confirmed by USA TODAY. Because of China’s aggressive limits on information about the Uyghurs, such accounts about friends or relatives who have disappeared or been imprisoned are difficult to verify. Uyghurs in China risk retribution from government authorities if they speak out.

Maya Mitalipova, a Uyghur-American and medical researcher, fears her friend has been swept up in China's mass incarceration of the Uyghurs. (Photo: Courtesy of Maya Mitalipova)

‘Fundamentally at odds’: Blinken, China meeting got heated in Alaska

Rushan Abbas, a Uyghur-American who founded an advocacy group called the Campaign for Uyghurs, said her sister went missing in Xinjiang in 2018, as she became more vocal about China’s abuses from the safety of the United States.

“I quit talking to her … to protect her,” Abbas said. “Even that couldn’t save her from retaliation.” Abbas said she learned last year her sister, Gulshan Abbas, a retired doctor, had been tried and sentenced to 20 years in prison.

“She’s in a dark dungeon somewhere because of me,” Abbas said.

A spokeswoman for Beth Israel hospital in Boston said she would try to verify whether Ibrahim had ever secured a fellowship there and did not respond to a follow-up email. But Nury Turkel, a Uyghur-American lawyer and foreign policy expert with the Washington-based Hudson Institute, said he met Ibrahim in Boston several years ago and Mitalipova’s account is “consistent with what I’ve heard” about Ibrahim’s situation.

Turkel said a mutual friend introduced him to Ibrahim about five or six years ago, when he was in Boston to help another Uyghur with an asylum claim.

“He’s a soft spoken, very scholarly, mild-mannered gentleman who came to visit me at my hotel,” he recounted. They spoke about the deteriorating situation in Xinjiang, where Chinese officials were then ramping up their campaign against the Uyghurs.

“I was heartbroken to hear that he got caught up in this,” said Turkel, who himself was born in a re-education camp during China’s cultural revolution.

U.S. officials and independent researchers say China is now engaged in “genocide and crimes against humanity” against the Uyghurs, who are predominantly Muslim, and other minorities, including Kazakhs, Uzbeks and Tajiks. Human rights groups say Chinese President Xi Jinping’s government has imprisoned more than 1 million Uyghurs and other peoples in a vast network of detention facilities, labor camps and prisons.

A demonstrator wearing a mask painted with the colors of the flag of East Turkestan takes part in a protest by supporters of the Uyghur minority on Thursday at Beyazid Square in Istanbul, Turkey. (Photo: Ozan Kose, AFP via Getty Images)

And a just-released State Department report says China is also subjecting the Uyghurs to sterilization, coerced abortions, rape and torture, along with “draconian restrictions” on freedom of religion, expression and movement.

“This is the most preposterous lie of the century, an outrageous insult and affront to the Chinese people,” Hua Chunying, a spokesperson for China’s foreign ministry, said at a Wednesday news conference. “The genocide allegation maligns China’s ethnic policy and Xinjiang’s development and progress. China is a unified, multi-ethnic country where the rights and interests of all ethnic minority groups are fully protected.”

Chinese government officials allege there are extremists within the Uyghur community and have said their campaign to “re-educate” the Uyghurs is justified by terrorism concerns. They say the network of detention facilities are not prisons, but rather “transformation through education” centers aimed at de-radicalizing the population.

Mitalipova says she doesn’t know the whereabouts of her friend Ibrahim, whose Chinese name is Yimamu Wulayin. She has told her story to the Xinjiang Victims Database, an online repository dedicated to documenting the disappearance and incarceration of Uyghur individuals. The database is run by Gene Bunin, who holds American and Russian citizenship and used to live in Xinjiang.

Imamjan Ibrahim was hoping to do a medical fellowship in Boston. But friends fear he's been swept up in China's mass incarceration of the Uyghurs. (Photo: Courtesy of Maya Mitalipova)

Hanna Burdorf, who also works on the database project, said it’s hard to determine how many ethnic minorities in Xinjiang have been detained. Besides, some Xinjiang residents may have cut off contact with friends and family living outside China for fear of being arrested, Burdorf said.

The database’s research shows some villages have had less than 1% of their population detained, while others have had nearly 20% locked up. Regardless of the total number, “this tragedy has had and is having a devastating impact on the whole society,” she said.

Ibrahim is now entry #3655 in the database, out of 13,566. It lists his current location as “unclear, as he may have been sentenced.” The entry includes a second “testimony” about his disappearance, from an anonymous person who said Ibrahim was arrested in April 2017 on “false accusations.” There has been no news of him since his arrest, according to the account.

A Uyghur boy holds a placard that reads: "I cannot have any news from my family and relatives in Eastern Turkistan", during a protest near the Chinese embassy in Ankara, Turkey, on March 25. (Photo: Burhan Ozbilici, AP)

After she started speaking out about Ibrahim, Mitalipova said two Uyghur women who currently live in the U.S. contacted her and told her Ibrahim was released and is doing OK. But she thinks Chinese officials pressured the two women to contact her, so she would stop submitting testimonials to the Xinjiang Database on Ibrahim’s behalf.

“I asked them why Imamjan doesn’t call me himself and ask me to stop looking for him?” she said in an email to USA TODAY. “They said because I don’t have Chinese app WeChat. I asked them both if they have seen Imamjan on the video chat or heard his voice.” They told her no, he had contacted them by text only.

The Newlines Institute for Strategy and Policy, a Washington-based think tank, recently issued a sweeping report on China’s treatment of the Uyghurs. It says Chinese officials have specifically targeted Uyghur men and women of child-bearing age in a campaign to reduce the population’s birth rates.

“China has simultaneously pursued a dual systematic campaign of forcibly sterilizing Uyghur women of childbearing age and interning Uyghur men of child-bearing years, preventing the regenerative capacity of the group and evincing an intent to biologically destroy the group as such,” the report says.

In the years since Ibrahim’s disappearance, Mitalipova says her uncle and other relatives living in Xinjiang – a region she and other Uyhgurs refer to as East Turkestan – have also vanished. She now devotes one day every weekend to protesting China’s treatment of the Uyghurs.

She said the entire world needs to wake up and force China to end its campaign against the Uyghurs, and she’s hoping her solo protests will help in some way.

“We’re the ones who actually has to bring this awareness,” she said. “We have to stop it.”

In new memoir, Hunter Biden seeks to reframe some political scandals, but omits others
Technology