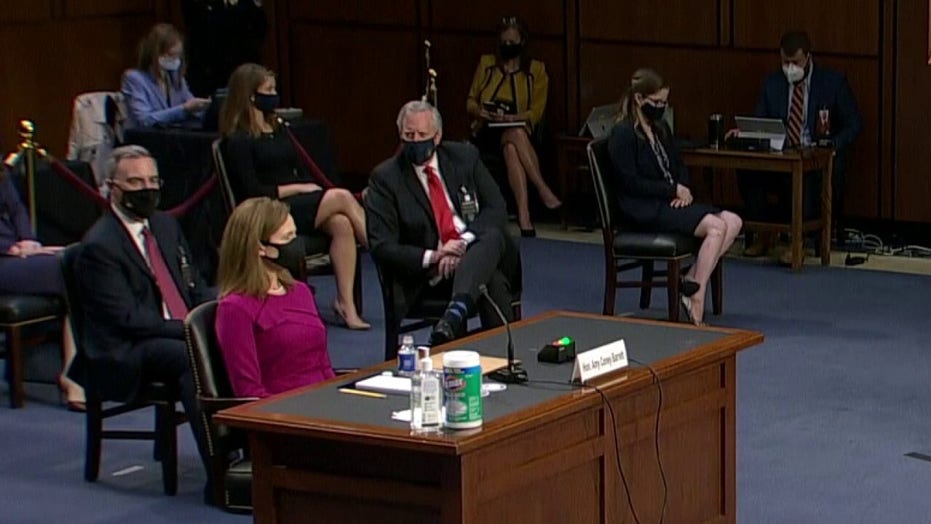 ACA unlikely to be struck down; Roberts and Kavanaugh are expected to support severability: Turley

Democratic vice presidential nominee Kamala Harris, a member of the Senate Judiciary Committee, slammed the panel for carrying out what she called an “illegitimate” process to confirm Judge Amy Coney Barrett to the Supreme Court before Election Day, while warning President Trump’s nominee for the high court will “undo” the legacy of the late Justice Ruth Bader Ginsburg.

Harris, D-Calif., who participated in the first day of Barrett’s Senate confirmation hearings remotely, began her opening statement by criticizing Chairman Lindsey Graham, R-S.C., for bringing “together more than 50 people to sit inside a room for hours while our nation faces a deadly airborne virus.”

“This committee has ignored commonsense requests to keep people safe—including not requiring testing for all members—despite a coronavirus outbreak among senators of this very committee,” Harris said, indirectly referencing Sen. Mike Lee, R-Utah, who tested positive, and has since recovered, from the novel coronavirus. Lee attended the hearing in person on Monday.

Harris said the hearing “should have been postponed” and called the decision to carry on as planned “reckless” and said it puts Capitol Hill officials, workers and aides “at risk.”

A committee aide told Fox News last week, though, that staff is working with the Architect of the Capitol, Office of the Attending Physician (OAP), the Senate Sergeant at Arms, the Capitol Police, and the Rules Committee to ensure the nomination hearing for Judge Barrett is conducted safely and in accordance with public health recommendations. 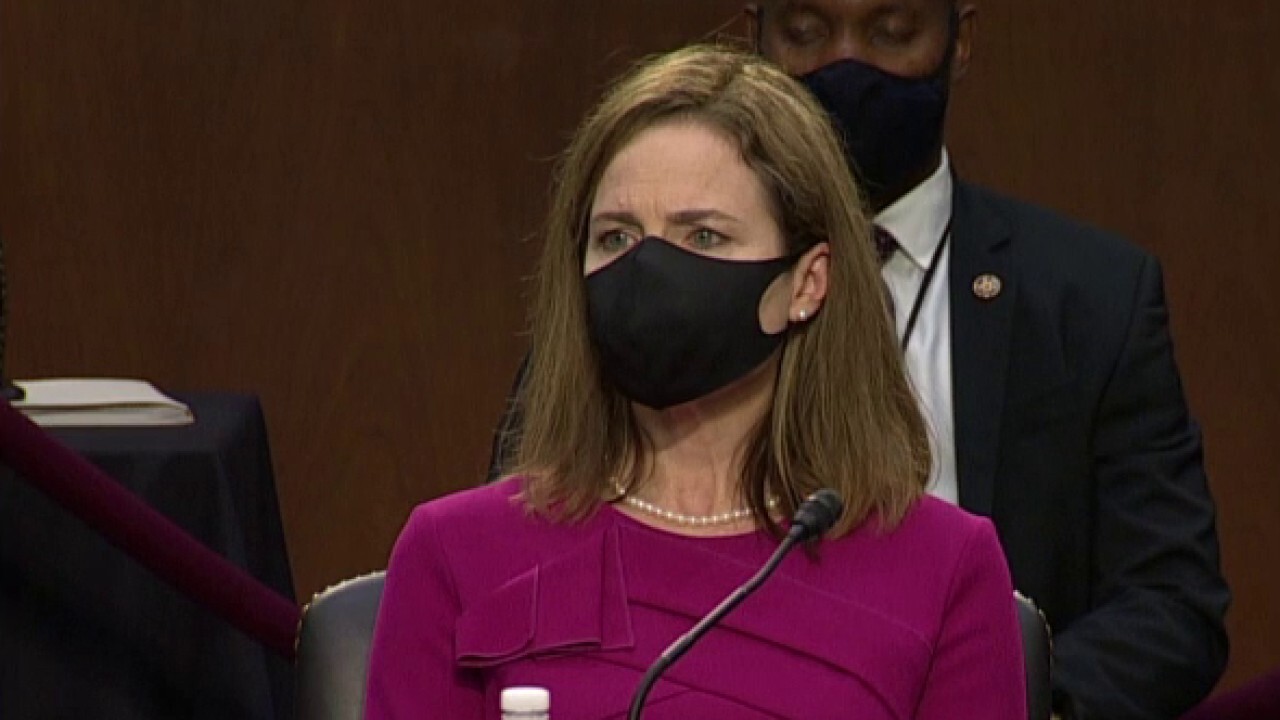 Committee staff was making sure that there are PPE and sanitary stations, and there will be strict limits on people allowed into the hearing room, among other precautions.

The aide also said that the committee will be meeting in a larger hearing room, in order to comply with recommendations by the Centers for Disease Control and Prevention (CDC) and the Office of the Attending Physician (OAP) regarding social distancing.

“Senate Republicans have made it crystal clear that rushing a Supreme Court nomination is more important than helping and supporting the American people who are suffering from a deadly pandemic and economic crisis,” Harris said. “Their priorities are not the American people’s priorities. But, for the moment, Senate Republicans hold the majority in the Senate and determine the schedule, so here we are.”

Harris went on to slam the president and Senate Republicans for “jamming” Barrett through the Senate while Americans “are actually voting.” 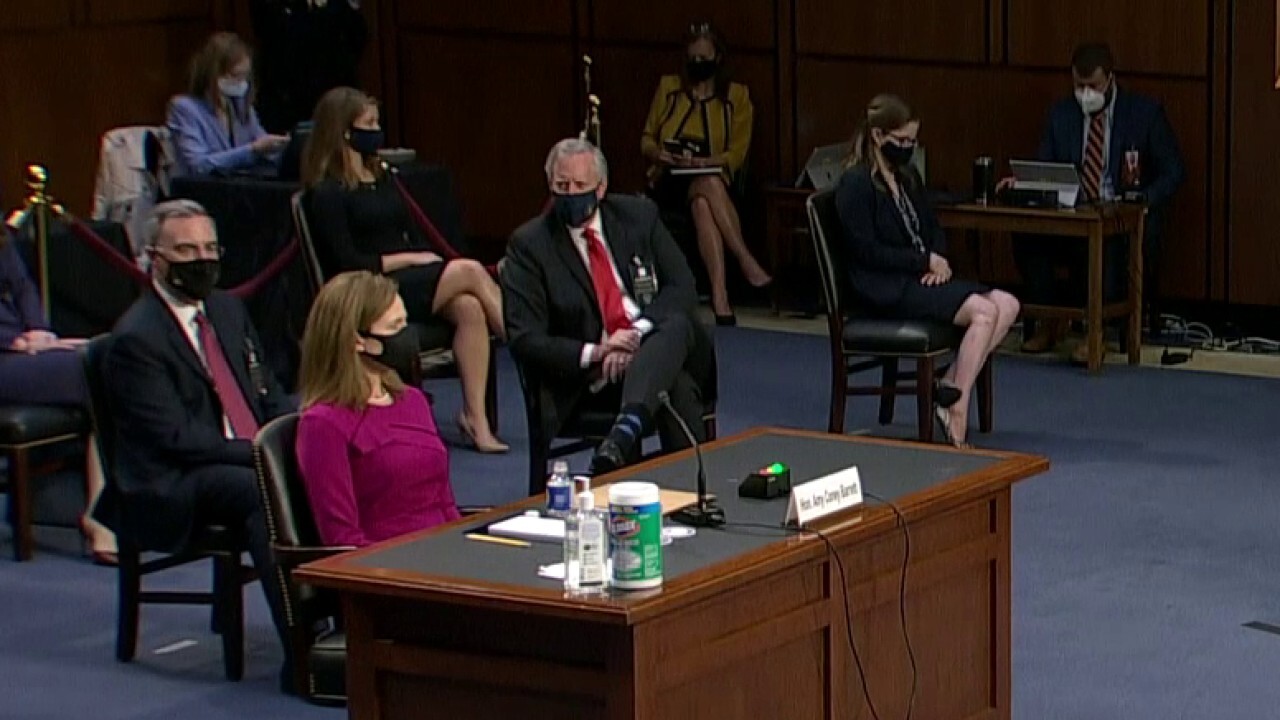 “More than nine million Americans have already cast ballots and millions more will vote while this illegitimate committee process is underway,” Harris said. “A clear majority of Americans want whomever wins this election to fill this seat. And my Republican colleagues know that.”

Harris went on to slam Republicans, suggesting they are trying to get Barrett confirmed to the high court “in time to ensure they can strip away the protections in the Affordable Care Act,” which is set to come before the Supreme Court on Nov. 10.

Meanwhile, Harris shifted, touting Ginsburg, who passed away last month, for having “devoted her life to this fight for equal justice.”

“She defended the constitution. She advocated for human rights and equality,” Harris said. “She stood up for the rights of women. She protected workers. She fought for the rights of consumers against big corporations. She supported LGBTQ rights. And she did so much more.

“But now, her legacy and the rights she fought so hard to protect are in jeopardy,” Harris continued. “By replacing Justice Ruth Bader Ginsburg with someone who will undo her legacy, President Trump is attempting to roll back Americans’ rights for decades to come.”

She added: “Every American must understand that with this nomination, equal justice under law is at stake.” 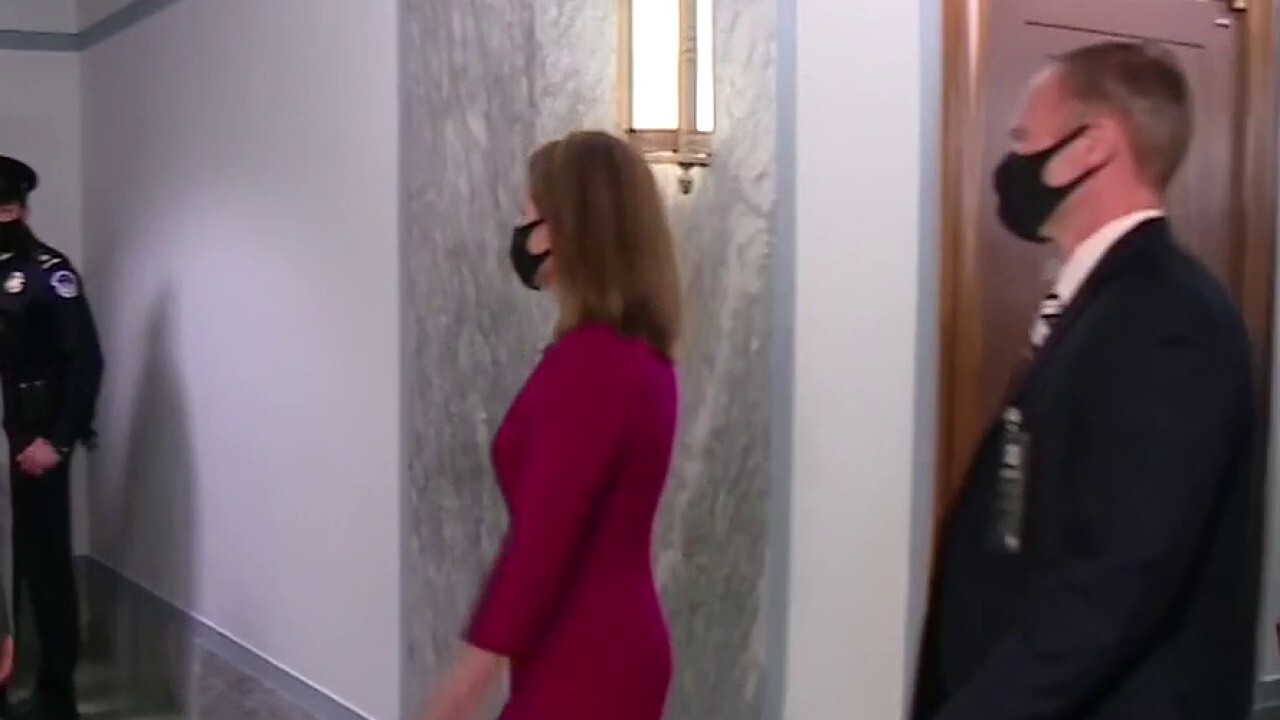 Harris went on to urge Graham to “wait to confirm a new Supreme Court justice until after Americans decide who they want in the White House.”

Harris’ comments come as she and Democratic nominee Joe Biden have repeatedly condemned Republicans on the campaign trail for their push to confirm a Ginsburg successor with less than seven weeks to go until the election, warning it “would cause irreversible damage.”

“The last thing we need is to add a constitutional crisis that plunges us deeper into the abyss – deeper into the darkness,” Biden said last month, calling Trump’s and Senate Majority Leader Mitch McConnell’s efforts an “exercise in raw political power.”

Democrats have objected to a Barrett confirmation so close to the election, citing McConnell’s refusal to consider President Barack Obama’s nomination of Merrick Garland in 2016.

McConnell, though, has said that it is a different situation as the White House and the Senate are not held by opposing parties.

As for the effort to push a confirmation to the Supreme Court until after Election Day, Graham began the hearing by quoting Ginsburg.

”The bottom line is Justice Ginsburg, when asked about this several years ago, said that a president serves four years, not three,” Graham said. “There’s nothing unconstitutional about this process."

But Biden and Harris have come into the spotlight in recent days on the issue of court packing.

The idea of “packing” the court with extra justices – attempted unsuccessfully by President Franklin Delano Roosevelt in 1937 to force through parts of his New Deal that were ruled unconstitutional by the high court – has bubbled away on the fringes of the party for years.

But the issue has come back to the forefront – specifically on the campaign trail – after the passing of Ginsburg, and Trump's nomination of Barrett to that vacancy on the high court so close to a presidential election.

The former vice president has been asked repeatedly about his stance on the issue — a question that, over the weekend, he answered by saying that voters don’t deserve to know where he stands.

During last week's vice presidential debate, Harris dodged the question when asked by Vice President Mike Pence, saying only that the “American people deserve to make the decision” of “who will serve for a lifetime.”

“Joe and I are very clear the American people are voting right now, and it should be their decision about who will serve on this most important body for a lifetime," she said.

Meanwhile, as for Ginsburg’s legacy, Barrett, as she accepted Trump’s nomination to the high court last month, said that she would “be mindful of who came before me,” saying Ginsburg “not only broke glass ceilings—she smashed them.”

“She was a woman of enormous talent and consequence,” Barrett said, while pledging to “faithfully and impartially discharge” her duties if confirmed.

Republicans appear to have the votes to move forward and confirm Barrett. Republicans have 53 votes in the Senate and can therefore afford three defections if no Democrat votes for the nominee. In that instance, Pence would be called in to break a tie.

Leaving college amid coronavirus? Getting a reimbursement could be difficult

What automated mortgage underwriting is, how it works, and why lenders use it
Technology