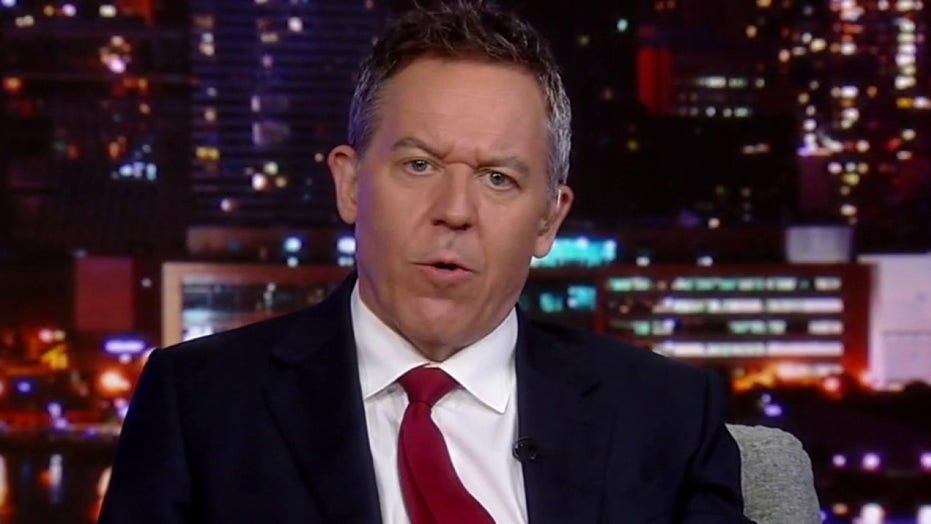 Greg Gutfeld: Late-night hosts have given in to the woke mob to celebrate climate week

We talk a lot about heroes.

Those who were there on 9/11 saving lives.

Those who helped our allies get out of Afghanistan.

And Kat’s work dating many of our nation’s most dangerous inmates.

But do you know who the real heroes are?

I don’t mean the great talented late-night hosts of the past, but the current witless activist ones of today, Who are all coming together to fight climate change..for just one precious night next week.

So it’s late-night getting together – but they refused to invite the belle of the ball.

Me. Snow White – while making sure to send invitations to all of the seven dorks.

CBS’s Stephen Colbert. And who knows more about harmful carbon emissions than this windbag?

ABC’s Jimmy Kimmel, who will no doubt cry and then claim his tears are made of acid rain.

James Corden, whoever that is. Maybe he’ll do a karaoke version of ‘here comes the rain’ in his Prius with AOC.

Poor Jimmy Fallon, who will pretend laugh at everything the rest will say, and they’ll still hate him.

There’s this guy  – uh – Seth…I don’t know his last name. His sole purpose of being there is to make the rest of them seem funny. Then blame the receding ice caps on Trump’s hair spray.

Trevor Noah and Samantha Bee will also join the crew, they’re the professor and Mary Ann of the bunch.

So they’ll all be selflessly devoting time on their shows for something called climate week.

To tell us how super urgent this threat is.

Yeah: it was so urgent that they had to wait until these hosts enjoyed their entire summers off. Like school teachers.

Yep, the planet is melting, polar bears are dying, but we’ll get on it…Right after i finish this game of cornhole with Alec Baldwin.

So we’ve gone from Carson’s Carnac to Letterman’s stupid pet tricks, to these sad sacks of pandering s—, discussing beach erosion happening in front of their secluded seaside estates.

Like I said, I wasnt asked to participate in this world-saving event.

I understand they don’t want the profession’s top talent to outshine everyone, and make them all look bad.

Besides, I already had plans.

I’ll be pulling an SUV with my genitals, upside down.

Despite doing it every night during his opening monologue.

It’s the exact opposite thing people say while watching his show.

But it’s all about urgency.

He doesn’t want to die. From what, exactly? Lack of laughter? Choking on your own tears? Lack of oxygen to the brain from huffing too many of Howard Stern’s farts?

Colbert noted it should be more than one night.

But he’s too busy taking salsa lessons with Chuck Schumer at the Arthur Murray school of dance in Brooklyn.

I mean if he really cared, why would he be dancing?

The country is in sad shape. Almost as sad a shape as Nikki Minaj’s cousin’s friend’s ball sack.

But when you’re a late-night host — those topics -crime, homelessness — aren’t what’s discussed.

Because they’re too hard. They’re topics that end up having you sound like your parents.

All full of common sense, incentives, and rules.

But climate is easy.  You dont need any of that.

It’s just a hyped issue that demands change, compliance, and attention from the peasants – yet the so-called ‘results’ are so long term it ensures none of these people pushing it will have to be held accountable for their hypocrisies and lies.

And when you’re that wealthy, you can create a life that allows you to shoulder the burdens you happily put on the truck drivers and plumbers, who cant.

And so their lockstep is more synchronized than a parade of North Korean soldiers; all one voice, one entity, a hive of fearful signalers knowing that if they don’t play along, their days are numbered.

So they back the hysteria to protect a paycheck.

And so, when our so-called comedians have gone full Greta Thunberg

It’s no wonder 56% of young people think humanity is doomed.

I wonder what our very own late night, Angry Black Male thinks

Tyrus, Angry Black Male: So, Colbert, Kimmel, Fallon can’t take an ass-whipping? So they’re not going to do jokes anymore? Because they’re not the king of late-night comedy, because Gutfeld is? But don’t feel bad, fellas. It’s not just Gutfeld, he’s got two big guns behind him: Tyrus and Timpf behind him. So you’re outmatched. Outmanned. It can happen to everyone. We all take an L. Just take an L. But you know, you can’t play the game, so you change the rules. How very woke of you. So now you’re going to be about…climate control. Because that’s what I want to talk about right before I go to bed at night. Not feel-good laughs and jokes. Climate control. I’d sooner eat a bowl of water with a fork than listen to Kimmel talk about hugging polar bears and build solar panels late at night. It’s cool, though. I guess we’ll just keep winning. And you guys do the climate thing.

Meanwhile, CBS had to cancel their new show, called “The Activist” —  where activists actually compete to promote various causes, one of them being climate.

After all, aren’t they also competing in desperate virtue signaling, so the wokeaholics don’t come after them?

Sad thing is, it doesnt work.

CBS actually pulled this show before it aired — because you guessed it — it just wasn’t woke enough.

Yeah, CBS tried to go woke,  and the online wokesters stuck their collective finger right in the CBS eye.

This isn’t about virtue. Or doing good. Or helping people.

It’s about protecting yourself from the woke. The stupid, the losers.

It’s too late for those late-nighters….they threw comedy under the bus, to protect their bottom lines.

Now they’re just nut jobs scared of losing their nut and their jobs.

But I doubt they’ll listen to me. I’m just a right-wing crank.

GEORGE CARLIN: The greatest arrogance of all: save the planet. What? Are these f—ing people kidding me? Save the planet? We don’t know how to take care of ourselves yet…I’m tired of these white liberal Beaujolais liberal White people who think the only thing wrong with this planet is that there aren’t enough bicycle paths…I’m really sick of these rock stars and movie stars gonna work off their cocaine guilt by saving a forest somewhere…there’s nothing wrong with the planet, the planet is fine. compared to the people the planet is doing great. The planet has been here for four and a half billion years. Alright?

So, enjoy climate day fellas — it’ll buy you some time.

But that time will surely come to an end, well before the planet does.

This article is adapted from Greg Gutfeld’s opening monologue on the September 16, 2021 edition of “Gutfeld!”