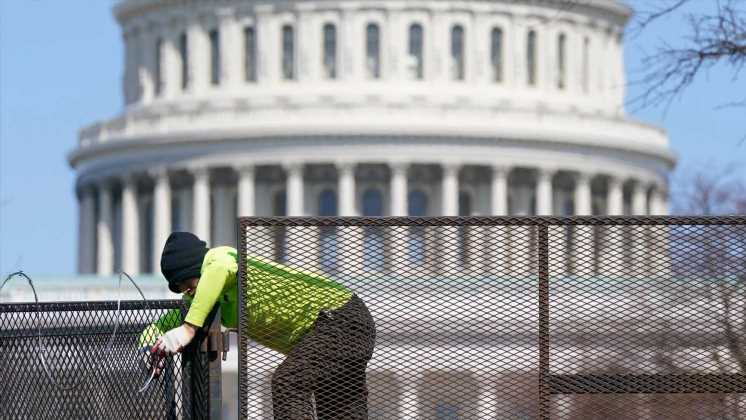 WASHINGTON – An attack near the U.S. Capitol Friday that left a police officer dead is expected to reignite a debate in Congress over how to fortify the nation’s seat of democracy amid security worries from lawmakers and after a pro-Trump mob stormed the building in January.

Hours after a car rammed into two U.S. Capitol Police officers and a security barricade near the complex, lawmakers began musing about what do next about the perimeter of the Capitol, where security fencing was erected after the Jan. 6 riots that left five people dead, including an officer.

“To think just about 10 days ago, we were removing the fences that created the border around the Capitol,” Sen. Tim Scott, R-S.C., who was in South Carolina but had staff in his Capitol Hill office, told Fox News.

“I’m sure there’s going to be a new conversation about what that looks like going forward,” he said.

The razor-wire-topped structures were pitched days after the insurrection at the Capitol, surrounding the campus that tourists and residents like to visit. As weeks passed, they were deemed unnecessary and some portions of the barriers came down in mid-March. Fencing was also modified to allow more traffic near the Capitol.

Then on Friday, a man later identified as 25-year-old Noah Green, drove his car into two police officers and then a barrier near the Capitol. Green got out of the car and went after police with a knife before he was shot. He later died.

A U.S. Capitol Police officer, William “Billy” Evans, died as a result of his injuries and another officer remains hospitalized.

Security around the Capitol is often contentious because lawmakers and visitors prefer an open campus, while security threats sometimes dictate restrictions. Lawmakers in both chambers had publicly pressed authorities and officials about when the rest of the fencing would come down, and decried talks of permanent fencing.

Republicans and Democrats alike have proposed legislation to prevent the fence from becoming permanent. Del. Eleanor Holmes Norton, D-D.C., introduced her version in February after the fence went up. Sens. Chris Van Hollen, D-Md., and Roy Blunt, R-Mo., joined her with companion legislation last week. Blunt is the top Republican on the Rules and Administration Committee, which oversees the Capitol grounds.

Rep. Tim Ryan, D-Ohio, who chairs a key panel overseeing the Capitol Police’s funding, said during a press conference following Friday’s events he thought “the fence has provided some security. Is it perfect? No.”

“I recognize that the fence is a disturbance. It’s an eye-sore. It sucks. Nobody wants that there. But the question is, is the environment safe enough to be able to take it down? And in the meantime maybe that fence can prevent some of these things from happening,” he said.

Conversations over support or opposition for permanent barriers are sure to happen now, a Democratic Capitol Hill aide told USA TODAY. But, without more information regarding Friday’s incident, “members will be reluctant to quickly return to the level of fencing we had a month ago.”

A Republican Senate aide told USA TODAY they believe “permanent fencing is not the solution, because anyone can always strike at the entrance of the gates.”

“If a common ground solution is needed, then the Capitol grounds should be closed to traffic, but not pedestrians,” the aide said.

Blunt and Van Hollen said they didn’t want roads around the Capitol to be shut down permanently with a fence like Pennsylvania Avenue, which runs in front of the White House, was after the Oklahoma City bombing.

Access to Capitol over the years has become more arduous with the additions of metal detectors, screenings for visitors, and tank traps for vehicles. But authorities have sought to keep easy public access to the “People’s House” while still bolstering security, unlike the White House, which is harder to get close to and requires scheduled tours.

California Democrat Rep. Ro Khanna, who was at the Capitol Friday, said the incident is a reminder that the building and what it represents remains a target.

“It seemed like we were finally getting back to what the Capitol should be a place where anyone could visit,” Khanna told MSNBC. “But you know this incident, I think it shows that there’s still a threat and security and safety has to come first, not just for members of Congress, but for all of the people who work here and people who visit here.”

Khanna said Friday’s attack was especially unnerving given what happened on Jan. 6.

The discussion over increased security at the Capitol comes amid a uptick in threats against lawmakers over the last several years and fears after the Capitol riot in January, when rioters were heard lodging threats against prominent Democrats as they stormed the building.

After the attack, a group of lawmakers sent a letter to House leaders asking for additional security measures to protect themselves, their families and staff.

The letter, which was sent by a bipartisan group of 32 House lawmakers, noted members of Congress “have reported receiving a significant uptick in threats of violence and even death” and pointed out a rise over the years, from 902 threats investigated by authorities in 2016 to nearly 5,000 in 2018.

While the notion of how much security to provide the Capitol is expected to continue, it’s nothing new. The issue of security at the complex and a permanent fence surrounding it has been raging for decades.

But after the 9/11 terrorist attacks, multiple shootings and even two bombings, lawmakers have largely elected to keep the campus open to the American public.

Both incidents led to a number of security changes that are still in effect today, including armed guards and metal detectors. The number of entrances to the building were limited and security badges are now worn by staff, journalists and visitors.

50 years of Capitol violence: Friday’s attack is the latest violence at the US Capitol, the site of shootings, bombings and riots over the last 50 years

After the 1983 blast, congressional leadership proposed possibly erecting an iron fence around the Capitol that would force visitors to walk through metal detectors before they even reached the building. The plan also included banning any parking on the grounds.

But, like today’s debate, lawmakers struggled with weighing the security risks with having a symbol of America’s democracy surrounded by fencing like military infrastructure.

”The terrorists have won,” Sen. Mark Pryor, D-Ark., was quoted in The New York Times in 1986 over the debate. ”Not the war, but at least part of the psychological battle.”

”The terrorists have not won,” fellow Democratic Sen. Alan Cranston, of California, shot back, according to the Times. ”But reasonable people take reasonable precautions.”