Facebook is reinstating advertising it previously blocked from an anti-abortion organization claiming that former Vice President Joe Biden and his running mate, Sen. Kamala Harris, D-Calif., supported abortion up until the moment of birth.

"We’re working to reinstate the ads," Facebook's Devon Kearns told Fox News in an email Friday. The social media giant had blocked the ad after The Dispatch, a conservative outlet run by former National Review editor Jonah Goldberg, issued a fact check that was later retracted on the ad.

On Friday, the Susan B. Anthony List tweeted a screenshot of Facebook explaining that one of the group's ads, which ran in key battleground states, had been "debunked" and therefore couldn't run on the platform.

The email, titled "Ad Can't Run: Update Ad," suggested that SBA List could "issue a correction" or dispute the ban by reaching out to the third-party fact-checker rather than Facebook itself.

In addition to blocking the ads, Facebook also placed a "partly false" warning label on a link to the ad. Amid backlash, The Dispatch issued a "mea culpa" on Friday in which it retracted the fact-check, and Facebook eventually removed the "partly false" label from the post. 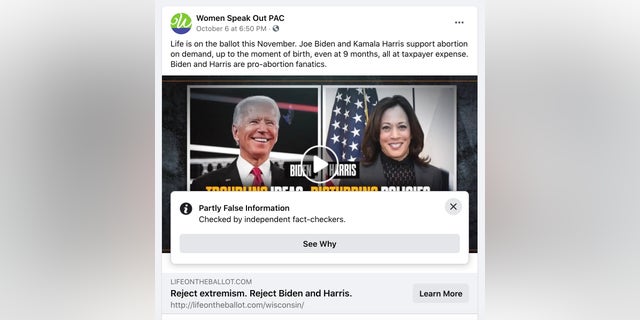 Regardless, the issue reignited concerns about social media bias. Sen. Josh Hawley, R-Mo., sent a letter to Facebook CEO Mark Zuckerberg, citing what he called "an increasingly troubling pattern: it has become abundantly clear that Facebook is targeting voices that dissent from the national media's progressive consensus."

SBA List's complaint came after Facebook and Twitter faced intense backlash for the way they censored a New York Post article on emails from a Burisma adviser to Hunter Biden and his former business partner.

Conservatives like SBA List President Marjorie Danenfelser, who also leads the Trump campaign's "Pro-Life Voices for Trump," have similarly claimed that tech companies have a habit of suppressing conservative viewpoints. Next Wednesday, the Senate is expected to hold a hearing on the issue with the Commerce Committee inviting leaders of Facebook, Twitter, and Google to testify. Each have denied political bias.

The initial fact-check argued that Biden and Harris hadn't explicitly supported late-term abortion. In The Dispatch's update, co-founder Steve Hayes said the fact-check was published in error, and in draft form, before final edits and internal fact-checking were completed.

"As a result, the viral post was assigned a 'partly false' rating that we have determined is not justified after completing The Dispatch fact-checking process," Hayes said.

In August, a Snopes fact-check similarly said Harris hadn't explicitly stated that she supports the termination of a pregnancy at any time just before birth."

But anti-abortion advocates like Alexandra DeSanctis, a staff writer at National Review, stay hey don't have to be explicit since their policy stances allow for late-term abortions to take place.

Both DeSanctis and SBA List spokesperson Mallory Quigley pointed to the Democratic nominee's support for codifying Roe v. Wade, a move that many states and Democratic presidential candidates endorsed amid a raft of anti-abortion laws.

Vice President Mike Pence made a similar claim about late-term abortion during his debate with Harris, asserting that Biden supported repealing the Hyde Amendment, which would allow taxpayer funds for abortions up until birth. While Roe legalized abortion early in a pregnancy, it left open exceptions for life and health of the mother at later gestational ages.

The decision in Doe v. Bolton, released on the same day in 1973 as Roe v. Wade, argued that life and health of the mother encompassed a wide range of reasons.  In his majority opinion, former Justice Harry Blackmun wrote that "medical judgment may be exercised in the light of all factors–physical, emotional, psychological, familial, and the woman's age–relevant to the well-being of the patient. All these factors may relate to health."

The Guttmacher Institute, which promotes abortion access and studies the issue, analyzed survey data of 272 women who underwent an abortion after 20 weeks of gestation. It concluded in 2013 that "[m]ost women seeking later abortion fit at least one of five profiles: They were raising children alone, were depressed or using illicit substances, were in conflict with a male partner or experiencing domestic violence, had trouble deciding and then had access problems, or were young and nulliparous."

The Democratic Party has also faced internal pushback for its position on abortion restrictions. It specifically supports codifying Roe v. Wade and opposes "laws that create barriers to women’s reproductive health and rights."

In criticizing Trump's comments on late-term abortion, The Washington Post previously cited a Northwestern University professor who said "'abortion until the moment of birth' doesn't exist."

"[I]t’s a boogeyman abortion opponents have created to frighten voters and derail rational conversation about constitutional rights,” said Katie L. Watson, a professor at Northwestern's Feinberg School of Medicine. “Nobody ‘supports’ it, and nobody does it. No patient ever asks a physician to end her pregnancy ‘the moment before birth,’ and no physician would agree to do it.”

While it's unclear when each abortion occurs, the Centers for Disease Control has reported that at least 143 babies died between 2003-2014 in cases involving induced termination. The agency noted that could be an underestimate.

Additional reporting and statements have raised questions about infants born alive after abortion attempts. For example, the Center for Medical Progress promoted videos in July showing a Planned Parenthood executive admitting in a deposition that his affiliate in California saw an infant born alive and then die "seconds" after the child left the mother's womb. Dr. Deborah Nucatola, the medical director who infamously discussed "crush[ing]" fetuses in a way that would yield intact tissue, also said she was "sure" she'd seen nonviable fetuses exit the uterus. By nonviable, she meant "not capable of survival."

It's unclear when those abortions occurred as Planned Parenthood has performed them at various gestational ages while obtaining fetal tissue. State health data has also shown that dozens of babies — at least 40 — were born alive after botched abortions in three states since 2016.

Does Modi want to FIX the Economy?
Technology