The analysis of campaign disclosures, which the advocacy group Oil Change U.S. conducted and HuffPost reviewed, found Tester received the most in donations from Exxon Mobil ― $99,783 from seven lobbyists, the company’s PAC and four lobbying firms working for the firm.

The report includes some donations lobbyists at K Street behemoths such as Akin Gump Strauss Hauer & Feld and Brownstein Hyatt Farber Schreck gave before taking on Exxon Mobil as a client. Spokespeople for Coons and Sinema said including those contributions in the total was “misleading” and “inaccurate.”

But Collin Rees, the senior campaigner at Oil Change U.S. who conducted the analysis, said the donations paint a fuller picture of Exxon Mobil’s influence taking stock of the relationships the company’s money helped cultivate as well as those that may have prompted the oil giant to hire certain lobbyists in the first place.

“This is a story about how lobbyists curry favor, and specifically about how Exxon’s current lobbyists have spent decades currying the favor of these six Democrats to position themselves to do things like safeguard fossil fuel subsidies and pare down infrastructure packages,” Rees said. “Exxon has hired these firms and lobbyists because they’ve contributed hundreds of thousands of dollars to these Democrats, both before and after they were hired by Exxon.”

Counting donations from lobbyists like Arshi Siddiqui, some of which came before Exxon Mobil hired her, makes Sinema the No. 2 recipient on the list, with $70,800 in contributions from eight Exxon Mobil lobbyists, the company PAC and three lobbying firms.

“Inclusion of those contributions would be incredibly misleading,” John LaBombard, a spokesman for Sinema, said of money that came from lobbyists who also work for other clients. “Kyrsten’s work in the Senate is influenced by only one thing: what is best for Arizona.”

Coons came in third with $68,650 from seven lobbyists, the PAC and four lobbying firms.

“One of the other ones that aren’t talked about is Senator Coons, who’s from Delaware, who has a very close relationship with Senator Biden,” McCoy said in the now-viral video, in which he believed he was talking to corporate headhunters in Dubai, United Arab Emirates. “So we’ve been working with his office. As a matter of fact, our CEO is talking to him next Tuesday.” 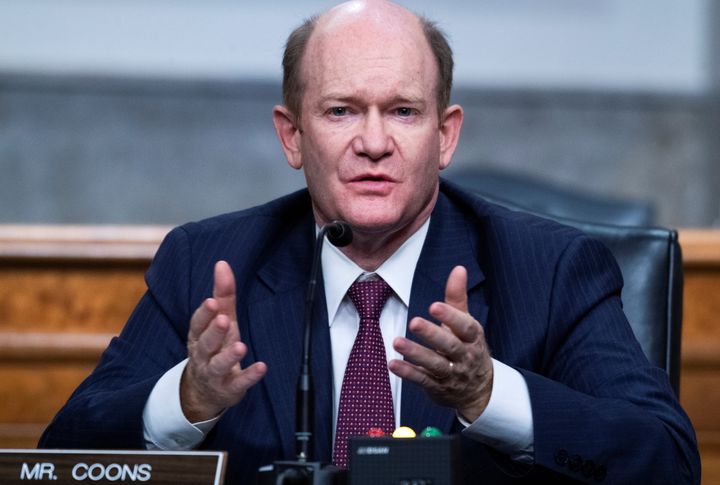 “On the Democrat side, we look for the moderates,” McCoy said. “So it’s the Manchins. It’s the Sinemas. It’s the Testers.”

Beyond seeking out right-leaning senators, McCoy said the company looked for “who’s up for reelection in 2022?”

A spokesman for Kelly said: “Senator Kelly has not met with the individual in the original Exxon video, and hasn’t spoken with anyone from this company in the Senate. Senator Kelly also does not accept corporate PAC contributions to his campaign.”

Exxon Mobil said it “complies with all federal and state regulations and lobbying laws.”

“We have a responsibility to our customers, employees, communities and shareholders to represent their interests in public policy discussions that impact our business,” said Todd Spitler, an Exxon Mobil spokesman. He said McCoy’s remarks “do not represent the company’s position on a variety of issues, including comments regarding interactions with elected officials.”

In the video, McCoy said Exxon Mobil is “playing defense” as the Biden administration and its slim Democratic majority in Congress seek to enact the country’s most significant climate legislation ever, including voting on an infrastructure package with billions of dollars for clean energy and electric vehicles as well as looking to pass a 100% clean electricity standard through budget reconciliation.

The push comes amid cascading climate disasters ― from deadly heat waves on one coast to historic flooding on the other ― that scientists say will grow worse and more frequent if fossil fuel use continues unabated. Even the International Energy Agency, hardly a tree-hugging institution, projects that averting catastrophic warming means “from today, no investment in new fossil fuel supply projects.”

But influence peddling is nothing new for the $258 billion company, which served as one of the chief financiers of a network of climate denial think tanks throughout the 1990s and early 2000s. Today, Exxon Mobil funds trade associations that lobby against climate policies while offering a rhetorical contrast to oil giants that advocate for politically unpopular proposals unlikely to reach fruition in a bid to look like responsible actors.

Donations don’t necessarily equal political clout. Sen. Ed Markey (D-Mass.), one of the lead champions of ending fossil fuel use, previously accepted campaign contributions from lobbyists linked to Exxon Mobil. He returned them in 2019, but the incident highlighted just how tightly woven oil companies are into the fabric of American politics and, as a result, how difficult it can be to avoid threads that ultimately lead back to the fossil fuel industry.

But a 2017 Ohio State University study indicates the donations have a measurable effect, particularly as they enter the five-figure range. For every $10,000 a lawmaker received from a major industrial polluter like Exxon Mobil, their probability of voting for pro-environmental legislation decreased by 2%, according to the study of donations between 1990 and 2010 published in the journal Environmental Politics. For Democrats, the effect of the donations was even stronger, reducing likelihood of a pro-environmental vote by 3%.

Regardless of whether it swings votes, firms like Exxon Mobil give “money to secure access to politicians,” said Tyson Slocum, the energy program director at the anti-corruption group Public Citizen.

“While securing access doesn’t guarantee results, it ensures the company can influence the thinking and positions taken by the politician receiving the money,” Slocum said, noting that he condemned Greenpeace UK’s “deceptive tactics” to dupe McCoy. “And the result shows that Exxon does indeed appear to influence these and other elected officials to which it contributes.”

Virginia Canter, the chief ethics counsel at the watchdog Citizens For Responsibility and Ethics in Washington, said corporate lobbyists “expect something in return” when they make political donations.

“As a result, when Exxon’s lobbyists, PACs and lobbying firms make donations to particular senators, we have to ask ourselves what do they expect and what did they get in return,” said Canter, a former ethics counsel for the Obama and Clinton administrations.

The sting video has prompted new scrutiny of Exxon Mobil beyond its campaign contributions. The New Republic examined the company’s routine six-figure donations to centrist think tanks such as the Brookings Institution. On Monday, the advocacy group Physicians for Social Responsibility published a new report indicating that the oil giant uses so-called forever chemicals ― a family of cancer-causing water contaminants known as per- and polyfluoroalkyl substances, or PFAS ― to drill at roughly 1,200 wells across six U.S. states.

If Exxon Mobil’s use of PFAS were more widely known, McCoy said in one part of the video, environmentalists would likely “start talking about how this is an Exxon Mobil chemical and Exxon Mobil is poisoning our waterways.”

Once the public accepts that framing of reality, he said, “the debate is pretty much over.”