An internal watchdog found evidence that Elaine Chao committed potential ethics violations while serving as transportation secretary under President Donald Trump, but the Justice Department declined to open an investigation.

Evidence collected by the Department of Transportation’s inspector general found that Chao had used her taxpayer-funded staff and office to do various personal tasks, as well as to help promote her wealthy family’s shipping business and sales of her father’s biography, according to the IG report released on Wednesday.

“A formal investigation into potential misuses of position was warranted,” Deputy Inspector General Mitch Behm wrote in a Tuesday letter to Rep. Peter DeFazio (D-Ore.), chairman of the House Transportation and Infrastructure Committee.

Among the 38-page report’s concerns, the IG found that a planned trip to China by Chao in 2017 was set to improperly include her family members and several personal events. Ethical questions about the trip were raised by The New York Times and others just before it was canceled by her department.

There was evidence that Chao instructed her staff to check with the Homeland Security Department on the status of a work permit application for a student who had received an award from her family’s philanthropic foundation. Her staff was also instructed to assist her father with store repairs and to mail Christmas ornaments to her family. 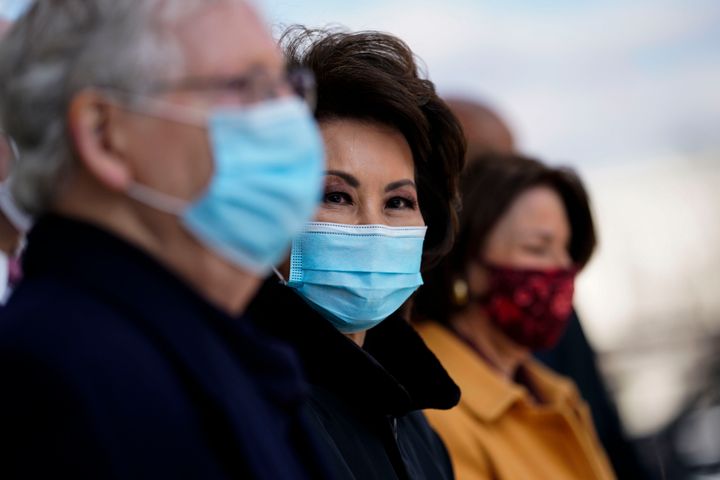 The IG’s office said it additionally looked into allegations that Chao improperly steered federal funds to her home state of Kentucky, which her husband, Senate Minority Leader Mitch McConnell (R), represents. It did not find any supporting evidence for this, however.

The IG’s findings were referred to the Justice Department’s Public Integrity Section and the U.S. Attorney’s Office for the District of Columbia in December 2020. Both offices declined to open criminal investigations.

Despite the documented ethics concerns, a Chao spokesperson claimed in a statement to Politico that the IG’s report “exonerates the Secretary from baseless accusations.”

DeFazio on Wednesday commended the IG’s office for conducting the review but said he was disappointed that it was not completed and released publicly while Chao was still at the Transportation Department. Chao, whose time in office was set to end with President Joe Biden’s inauguration on Jan. 20, resigned on Jan. 7 in response to the violent insurrection at the U.S. Capitol one day earlier.

DeFazio also expressed concern that the Justice Department declined to look into the allegations.

“Public servants, especially those responsible for leading tens of thousands of other public servants, must know that they serve the public and not their family’s private commercial interests,” he said.