Dr. Anthony Fauci said Monday that President Donald Trump’s campaign should take down a political ad featuring his comments because he did not consent to it and the remarks were taken out of context.

The nation’s leading infectious disease expert spoke to CNN’s Jake Tapper about the 30-second campaign ad, which appears to show the doctor endorsing Trump’s abysmal handling of the coronavirus pandemic in a misleading clip not approved by Fauci before it aired. Tapper asked if the Trump campaign should take down the ad, to which Fauci said, “You know, I think so.”

“I think it’s really unfortunate and really disappointing that they did that. It’s so clear that I’m not a political person, and I have never ― either directly or indirectly ― endorsed a political candidate,” Fauci told Tapper. “And to take a completely out-of-context statement and put in what is obviously a political campaign ad, I thought was really very disappointing.”

Asked how he would feel if the Trump campaign was preparing to release another ad featuring the doctor, Fauci said it would be “terrible.”

“I mean, that would be outrageous if they do that. In fact, that might actually come back to backfire on them. I hope they don’t do that, ’cause that would be kind of playing a game that we don’t want to play,” he said. “So I hope they reconsider that, if, in fact, they are indeed considering that.”

Asked what he meant by “backfire,” Fauci told The Daily Beast that the Trump campaign is “in effect harassing me” by putting him in ads against his will.

“Since campaign ads are about getting votes, their harassment of me might have the opposite effect of turning some voters off,” he told the publication. Fauci assured that the “backfire” comment was in no way a threat that he would leave his post if featured in another ad.

The ad first began airing in Michigan and features a video clip of an interview Fauci gave on Fox News in March, when the pandemic was spreading throughout the country.

“I can’t imagine that … anybody could be doing more,” Fauci is heard saying right after the video’s narrator praises Trump’s response to the pandemic, stating: “President Trump tackled the virus head-on, as leaders should.”

Fauci was actually referring to the efforts of himself and his entire team of scientists, as shown in a video of the uncut interview clip.

“I’m connected by phone throughout the day and into the night and I’m talking, 12, one, two in the morning,” Fauci said in the uncut clip. “I’m not the only one. There’s a whole group of us that are doing that, it’s every single day. So I can’t imagine that under any circumstances that anybody could be doing more.”

“In my nearly five decades of public service, I have never publicly endorsed any political candidate,” the doctor said in the statement. “The comments attributed to me without my permission in the GOP campaign ad were taken out of context from a broad statement I made months ago about the efforts of federal public health officials.” 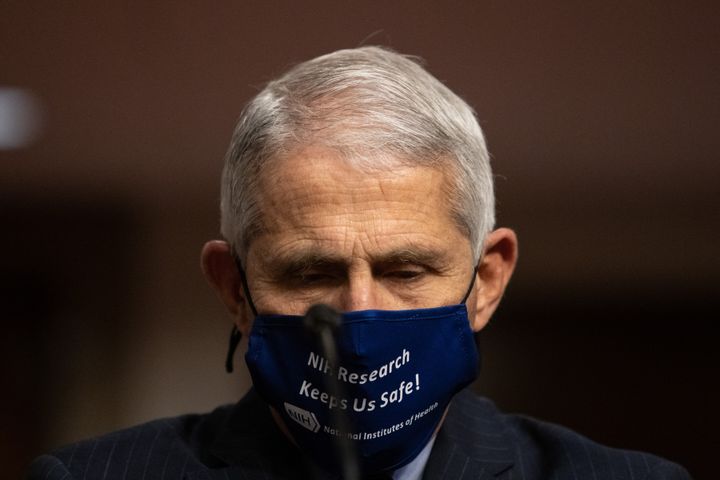 “These are Dr. Fauci’s own words. The video is from a nationally broadcast television interview in which Dr. Fauci was praising the work of the Trump Administration,” Murtaugh said in a statement. “The words spoken are accurate, and directly from Dr. Fauci’s mouth.”

Trump has publicly undermined Fauci, who is a member of the White House coronavirus task force, on safety protocols and potential treatments for COVID-19 throughout the pandemic. The president tweeted on Sunday in defense of the ad, saying: “They are indeed Dr. Fauci’s own words. We have done a ‘phenomenal’ job, according to certain governors. Many people agree.”

The conflict over the ad signals rising tensions between Fauci and the president, with the doctor’s notoriously apolitical statements growing more and more frustrated.

Everyone deserves accurate information about COVID-19. Support journalism without a paywall — and keep it free for everyone — by becoming a HuffPost member today.