Despite COVID Nightmare For Unemployed, Democrats Water Down Reform Proposals

Democrats are watering down their ambitions to reform unemployment insurance, despite major shortcomings in a system that has left millions of Americans with little help during the COVID-19 pandemic.

On Tuesday, Sen. Ron Wyden (D-Ore.) proposed a new bill that would set a minimum federal standard for the duration and eligibility of unemployment benefits. Most notably, the bill would guarantee 26 weeks of benefits for jobless Americans.

Most states already give 26 weeks of unemployment insurance, but seven do not, and in the past some states have cut unemployment benefits in order to balance their budgets. Sens. Michael Bennet (D-Colo.) and Sherrod Brown (D-Ohio) are also backing this proposal.

The bill is an extremely slimmed-down version of a bill Wyden and Bennet proposed in April that not only guaranteed 26 weeks of benefits, but also created a standard for wage replacement, ensured extra aid kicked in when unemployment levels were high and also federalized a version of the Pandemic Unemployment Assistance program, which was created to extend benefits to those not typically covered by unemployment — such as self-employed workers or those in the gig economy.

Since then, federal unemployment benefits, which gave jobless Americans an additional $300 a week through the pandemic, and the PUA program have both expired, leaving nearly 7.5 million Americans with no additional help.

There’s been no appetite to extend them among Democrats; even President Joe Biden said it was appropriate for the benefits to expire. Democrats have also backed off any major reforms to the unemployment system, as Wyden and Bennet previously proposed.

Wyden and his colleagues hope this slimmed-down proposal can actually make it into the big budget reconciliation bill Democrats hope to pass this fall. That package, which could include up to $3.5 trillion in new federal spending, is meant to address major parts of the party’s agenda, from climate change to paid leave, and can be passed on a partisan basis.

Over the course of the last year, there’s been support among White House officials and Democrats across the ideological spectrum to overhaul the unemployment insurance system, but cost always seems to scare lawmakers off. House Democrats included the idea of tying benefits to economic conditions last summer but dropped the proposal after seeing how much federal spending it would require.

“This proposal makes a down payment on long-overdue reform to our unemployment system, and was designed to fit in our upcoming package,” Wyden said in a statement to HuffPost, acknowledging the spending and political restraints of Democrats’ budget reconciliation bill. “This system has been intentionally broken to minimize the numbers of jobless workers who can access it, and we’re going take significant steps toward fixing it.”

Democrats are already running into some serious headwind within their own party as they try to negotiate the budget reconciliation package, with more moderate and conservative Democratic lawmakers wary of spending too much to create new programs. 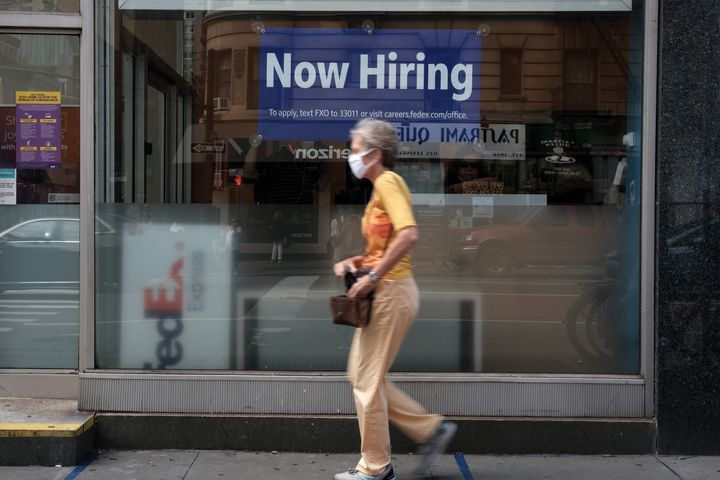 “I believe with all this rhetoric that conservative Democrats have raised during the reconciliation process about spending has lowered the ambitions of the Democratic Party right now in extending unemployment benefits and, frankly, I think it’s mistaken,” Rep. Alexandria Ocasio-Cortez (D-N.Y.), who made a lonely and failed push to extend the pandemic federal unemployment benefits earlier this month, told HuffPost.

It’s left the nation’s jobless in a constant state of limbo. To access benefits, laid-off workers have had to wait long periods of time to navigate backlogged state systems; additional federal benefits fluctuated in size from the original $600 per week in the first COVID-19 relief bill, to the $300 per week more recently. Now, they’ve all fully expired. Some states, largely run by Republicans, even cut off the boosted benefits early, claiming without much statistical basis that the additional money was disincentivizing work.

Meanwhile, there are still millions fewer jobs in the United States than there were before the pandemic, and hiring has slowed.

There are also wide disparities between how much states pay for unemployment insurance; it ranges to as low as a maximum of $240 a week in Arizona to $855 per week in Massachusetts. Poverty researchers found boosted federal unemployment benefits as well as the stimulus checks went a long way to alleviate poverty during the pandemic.

“We have a crisis that it’s in our midst right now, but we also have a long-term problem that has to be addressed. It cannot keep being swept under the rug or pushed off,” said Marianne LeBlanc, a self-employed big events coordinator from Nevada who found herself unemployed for long periods of time during the pandemic. LeBlanc, who began advocating for other unemployed Nevadans and those in her industry during the pandemic, said she would have been in deep financial trouble had it not been for the PUA program.

As cities begin to allow big events and shows again, she’s been able to find some work, but knows her work remains unpredictable as the pandemic continues.

“Situations like we’re in right now will continue to exist and they will be huge financial drains on our economy,” LeBlanc said. “Letting 10 million people fall off a financial cliff is going to have its ramifications.”

She equated it to the plot of the popular Avengers movie “Endgame.”

“I equate this to the part in ‘Endgame’ where Thanos snaps and he makes 50% of the population disappear and then the Avengers then work exceptionally hard to restore that 50% back, and when they come back, there’s no place for them. Everybody has moved on, life is in a totally different place.”

“That’s what it feels like to be unemployed right now.”