Democrats are in a ‘hole’ with $3.5T spending bill: Steve Moore

Democrats' reconciliation bill includes a $6 billion fund that Transportation Secretary Pete Buttigieg would be able to allocate entirely at his own discretion, an arrangement at least one Senate GOP aide says could function as a backdoor way to fund earmarks.

Section 110008 in the 2465-page bill released Friday sets aside $6 billion for "projects to advance local surface transportation priorities." It was produced by the House Transportation and Infrastructure Committee, which is chaired by Rep. Peter DeFazio, D-Ore.

DeFazio notably wrote the INVEST Act, which was the House's version of an infrastructure bill that it passed earlier this year. But Senate moderates essentially tossed all of DeFazio's work from the INVEST Act and replaced it with their preferred legislation, which became the bipartisan infrastructure bill that is set for a potential House vote Monday.

The Senate's disregard for the INVEST Act upset DeFazio, who has not been shy about his distaste for the bipartisan bill. 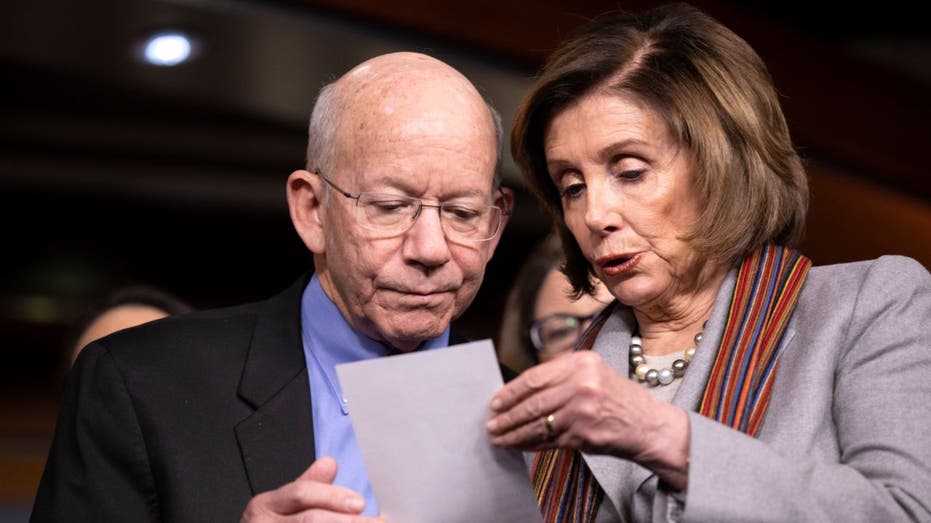 "This was written by three people who have no knowledge of nor expertise in transportation infrastructure," DeFazio said in July.

He later amended the number of people with "no knowledge or nor expertise in" infrastructure to four: Sens. Kyrsten Sinema, D-Ariz.; Rob Portman, R-Ohio; Susan Collins, R-Maine, and White House Counselor Steve Ricchetti.

Just this week DeFazio doubled down on those comments, calling the bipartisan bill "crap" and saying, "I'm trying to fix that in reconciliation," according to NBC.

DeFazio also said in a letter to other Democrats on Aug. 16 that he wants to put INVEST Act priorities into Democrats' reconciliation bill, including "member designated projects," also known as earmarks.

And a Senate GOP aide familiar with transit negotiations says the $6 billion that's being allocated for Buttigieg to spend at his discretion may be a convenient backdoor way to fund some of those earmarks.

SCHUMER ANNOUNCES ‘FRAMEWORK’ TO PAY FOR SPENDING PLAN, BUT TOP DEMS SAY THEY WEREN'T TOLD ABOUT IT

"Chairman DeFazio hasn’t been shy in expressing resentment over being left out of the bipartisan infrastructure negotiations," the aide told Fox News. "Now he’s promising his colleagues that the $3.5 trillion tax-and-spending spree is their one shot to convince the administration to use a $6 billion slush fund for ‘member designated projects’— lawmaker-speak for earmarks."

"Don’t be surprised when Secretary Buttigieg announces $20 million for solar panels at bus stops in Guam or $3 million to paint bathrooms in San Francisco," the aide added. 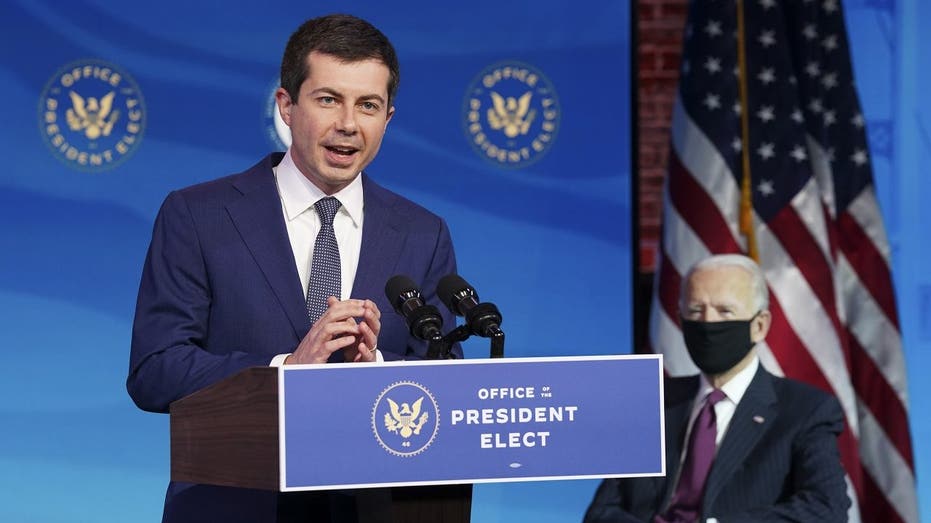 Transportation Secretary Pete Buttigieg speaks at an event with then-President-elect Joe Biden at The Queen theater in Wilmington, Del., Wednesday, Dec. 16, 2020. Buttigieg would have full discretion over how to spend $6 billion on local transportati

According to San Nicholas' website, Guam's bus shelters are insufficient and too few, along with other elements of the territory's public transportation. The project is officially named "Guam Public Transit Modernization — Bus Shelters" and would increase the number of bus shelters on the island tenfold.

Lee's website says the $3 million "is designated to renovate up to 26 public restrooms at 13 BART stations in Alameda County with new paint, lighting, bathroom fixtures and floor/wall repairs. Project will also include, where feasible, LED lighting upgrades to the areas adjacent to the restrooms."

Among the other earmarks for the INVEST Act was $440,000 for an electric trolley in Ojai, California, requested by Rep. Julia Brownley, D-Calif. The trolley serves about 7,000 riders per month. The trolley operates two routes, which largely overlap.

Democrats are not the only members who requested earmarks in the INVEST Act.

Rep. Maria Salazar, R-Fla., requested eight earmarks on her own. They included $1.4 million for a trolley project in Coral Gables, which was not approved in the INVEST Act. A project of Salazar's that did get approved was the "Commodore Trail Missing Link," a $999,205 effort to create a safer place for cyclists and pedestrians to travel on South Miami Ave.

DeFazio's office did not respond to a request for comment asking if he's pushing the administration to use the $6 billion being set aside for "local surface transportation priorities" in a way that closely mirrors the INVEST Act's earmarks. The request also asked whether DeFazio would approve of Buttigieg using the money for the Guam bus shelters, Bay Area Transportation Authority (BART) bathrooms or the Ojai trolley.

The Department of Transportation did not respond to a request for comment asking whether Secretary Buttigieg has been in contact with DeFazio about how the influential congressman may want that discretionary money spent. The request also asked whether the secretary would spend the discretionary money in a way that closely mirrors the INVEST Act's earmarks.

House Speaker Nancy Pelosi, D-Calif., accelerated work on the reconciliation bill late this week in hopes of satisfying progressives who are want assurances that it will indeed pass before a vote on the Senate's infrastructure bill next week. But moderate and progressive Democrats are still very far apart on what they want to see in the reconciliation bill and the order in which the House should advance the two pieces of legislation.

This means that much of the reconciliation bill could change before its final passage – if it passes at all.

Pelosi wouldn't commit Friday to bringing reconciliation up for a vote in the House next week. But she said she's "encouraged" by how things are going.

Fed flags a rate hike as soon as 2022; tapering could start in November