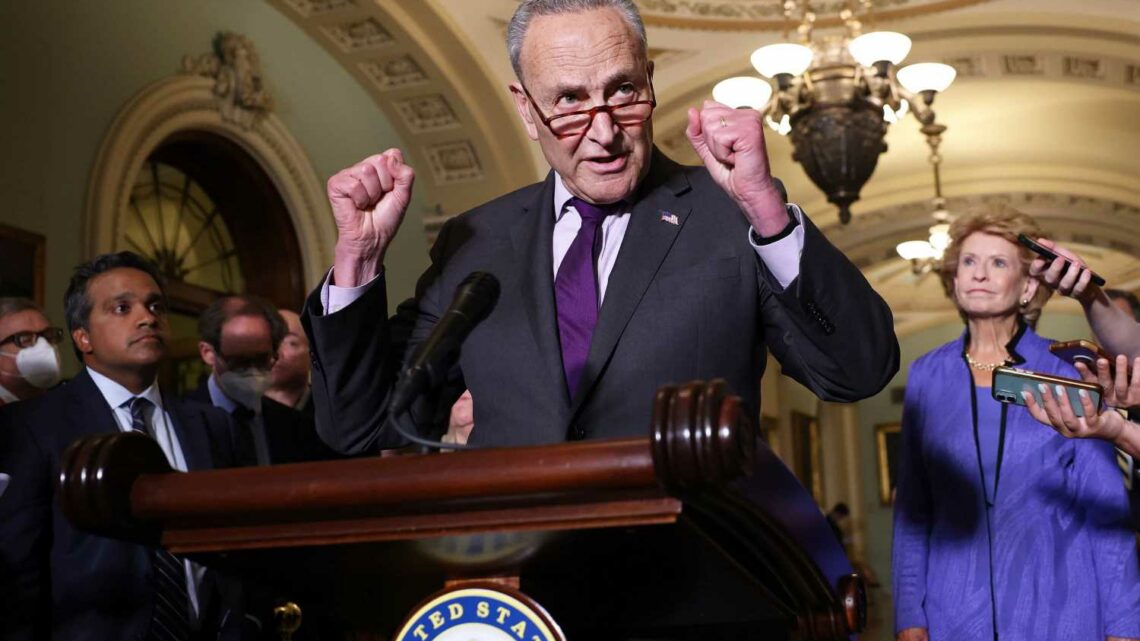 Democrats will move to raise the debt ceiling hours before deadline

Congressional Democrats will move to raise the debt ceiling Tuesday, one day before the Dec. 15 deadline that Treasury Secretary Janet Yellen warned could mark the start of the first-ever U.S. default.

The effort will begin in the Senate, where Majority Leader Chuck Schumer, D-N.Y., is expected to advance a debt-limit resolution early Tuesday afternoon. That procedural green light will mark the start of 10 hours of Senate debate allowed for under the resolution, split between the two parties.

Schumer said Tuesday morning that Democrats will likely yield some portion of their debate time to speed up the process. While a vote could slip to the evening hours if Republicans use all their allotted time, the chamber's Democrats are expected to pass a debt-ceiling increase before the end of the day.

The bill would then go to the House, where the narrow Democratic majority is expected to approve it and send it to President Joe Biden's desk late Tuesday or early Wednesday. He is expected to sign it just hours before the Treasury Department forecasts it would exhaust its tools to pay the government's bills.

On Tuesday, Schumer said that the resolution the Senate will vote on will raise the debt limit "to a level commensurate with funding necessary to get into 2023." Later Tuesday morning, Democrats unveiled the text of the resolution, which showed a proposed increase of $2.5 trillion.

Yellen estimated the U.S. would run out of ways to pay its debt on Dec. 15. If Congress does not raise the debt ceiling before the Treasury misses a payment, the country would default for the first time. The Treasury secretary said she expects the U.S. would slip into a recession if Washington failed to make its debt payments.

A default appears unlikely after 14 Republicans joined every Democrat last week to allow a one-time vote to lift the debt ceiling with a simple majority. The agreement, crafted by Schumer and Minority Leader Mitch McConnell, R-Ky., ended the GOP's months long threat to filibuster a borrowing-limit hike.

The deal will allow Democrats to increase the debt limit on their own without needing the 60 votes usually required to break a filibuster. In the Senate split 50-50 by party, Democrats will likely to need support from every member of their caucus, as well as tiebreaker Vice President Kamala Harris, to advance the bill.

Democrats and Republicans typically vote together to raise or suspend the debt ceiling. This time, however, the GOP has argued Democrats should increase the borrowing limit on their own as they try to pass a $1.75 trillion social safety net and climate package despite Republican opposition.

"Honestly, I think some of these programs would be a bad idea if the money were free," Sen. Pat Toomey, a Pennsylvania Republican, said of Democrats' Build Back Better plan during CNBC's "Squawk Box" on Tuesday morning.

"The idea that we're going to throw thousands, and thousands, and thousands of dollars at American families who have plenty of income — who have income that's multiples of the median income. We're going to give them free programs and free money because they have a child — what is that really accomplishing?" Toomey added. "Other than undermining a sense of personal responsibility and independence?"

Raising the debt limit does not authorize new government spending. Instead, it's akin to an increase to a consumer's credit card borrowing limit and allows the Treasury Department to continue to pay off the nation's bills.

Yellen often notes that Republicans and Democrats would have had to raise or suspend the debt limit even if Congress had passed zero legislation in 2021.