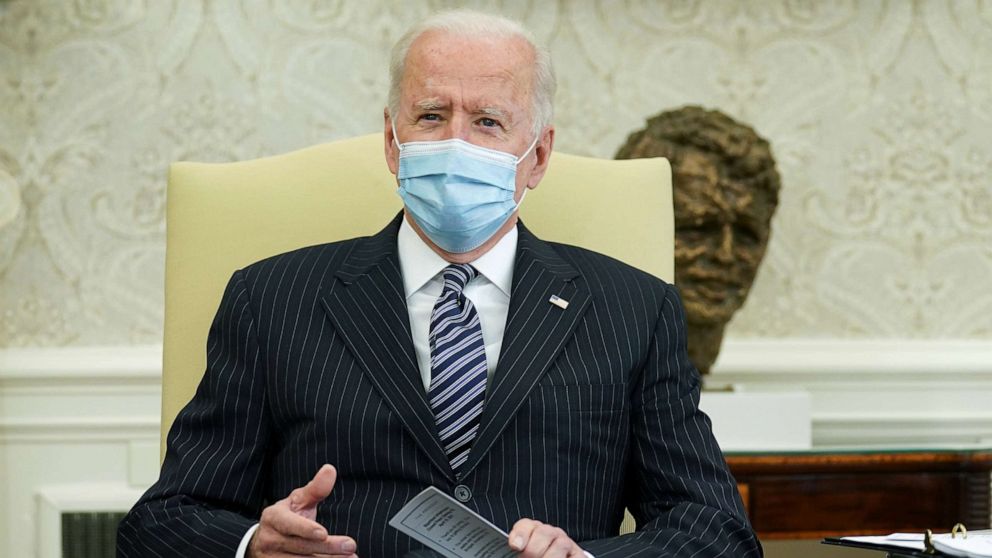 Much of what comes next could rest on how Biden chooses to define his terms. Words including “bipartisanship” and “infrastructure” may seem to have relatively straightforward meanings, yet whether the White House is comfortable scaling back ambitions could be the biggest factor determining the success of the Biden agenda from here.

“I am prepared to compromise,” the president said in opening a bipartisan meeting with members of Congress who were chosen for the get-together because they used to be governors or mayors.

Biden wouldn’t have to say that unless he needed to. But even as Democrats clearly lack the votes for the kind of sweeping infrastructure-plus package the White House put on the table, glimmers of ideas that have GOP buy-in continue to percolate.

Bipartisan groups of lawmakers are huddling to discuss issues including the minimum wage, immigration reform, corporate taxes and, of course, infrastructure. Not all of those groups will get bills passed — and maybe none will — but a presidential boost could be consequential along the way.

Pitched partisan battles and mistrust between the parties suggest the difficulty of the tasks ahead. So do the limitations inside both parties as defined by some of the louder voices and the hot-button issues they advocate around.

But if Biden truly wants compromises, they may be available to him to a surprising degree at this moment. If “inaction is not an option,” as the president reiterated on Monday, the action has to start somewhere.

The RUNDOWN with Averi Harper

As restrictive voting legislation make its way through statehouses across the country, lawmakers on Capitol Hill will gather for a Senate Judiciary Committee hearing entitled, “Jim Crow 2021: The Latest Assault on the Right to Vote.”

Among the prominent figures slated to testify is Stacey Abrams founder of Fair Fight Action, Sherrilyn Ifill, president and director of the NAACP Legal Defense and Educational Fund and Georgia Sen. Raphael Warnock. A scholar from the Peach State and a Georgia state lawmaker are expected to participate as well, indicating that the state’s sweeping voting legislation passed earlier this month will be a focus.

H.R. 1, the extensive voting reform package called the “For The People Act of 2021,” passed the House in March but hasn’t yet been taken up in Senate where it faces challenges from Republicans.

Biden has called for the passage of the bill along with a restoration of the Voting Rights Act after the Supreme Court struck down provisions that required federal approval for changes to voting in areas that have historically discriminated against people of color in 2013. In an exclusive interview with ABC News Chief Justice Correspondent Pierre Thomas, Attorney General Merrick Garland signaled that the Civil Rights division of the Department of Justice would take action on voting rights, if necessary.

The TIP with Alisa Wiersema

The 2021 special election calendar racked up a sixth contest on Monday with GOP Rep. Steve Stivers’ retirement announcement. In a series of tweets, Stivers said he plans to retire from congress by May 16 and go on to become the president and CEO of the Ohio Chamber of Commerce.

Stivers — a former chairman of the National Republican Congressional Committee, who was also one of the first Republicans to condemn former President Donald Trump over the Jan. 6 riot — now leaves behind a largely red pickup opportunity for future hopefuls. His new endeavor also means the longtime Ohio congressman won’t compete for the highly sought-after Senate seat opening in his home state created by Sen. Rob Portman’s planned departure, which currently features a slate of Trump-friendly Republicans.

The still to-be-announced contest for Ohio’s 15th Congressional District will be the second Buckeye State special election this year. The race to replace Housing and Urban Development Secretary Marcia Fudge in the state’s solidly blue 11th Congressional District is already underway and will feature an August primary before the final matchup in November.

Although it’s unlikely that either of the contests will present competitive opportunities for flipping districts, Stivers’ departure offers congressional Democrats a small reprieve in terms of legislative math. Following his exit, the House lineup will include 218 sitting Democrats against 211 Republicans, leaving Speaker Nancy Pelosi a three-vote margin of error for passing legislation.

Former Vice President Walter F. Mondale, a liberal icon who in 1984 lost one of the most lopsided presidential elections after bluntly telling voters to expect a tax increase if he won, died Monday. He was 93. Mondale followed the trail blazed by his political mentor, Hubert H. Humphrey, from Minnesota politics to the U.S. Senate and the vice presidency, serving under Jimmy Carter from 1977 to 1981. In a statement, Carter said he considered Mondale “the best vice president in our country’s history.”

FiveThirtyEight’s Politics Podcast. The idea of the celebrity politician isn’t going away just because former President Donald Trump is out of office. Caitlyn Jenner says she’s in the process of deciding whether to run against Gavin Newsom in California’s gubernatorial recall election this fall. Matthew McConaughey leads incumbent Greg Abott in a hypothetical matchup for Texas governor, according to a recent poll. In this installment of the FiveThirtyEight politics podcast, the crew talks about the appeal of celebrity candidates and what it tells us about our politics.They also discuss the politics of reparations after a Democratic proposal in the House to study reparations for slavery was voted out of committee for the first time since it was introduced in Congress in 1989. https://53eig.ht/2M0rQx6

Iran says it only enriched its uranium to 60% as a show of strength, and can reverse back to nuclear-deal levels if the US lifts sanctions
Technology