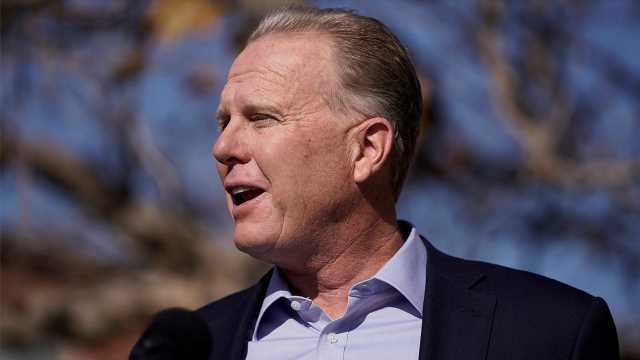 Fox Nation host Tomi Lahren blasts liberal governors for acting like they are ‘too big to fail’ and the media for letting them get away with it.

California gubernatorial candidate Kevin Faulconer on Wednesday slammed Gov. Gavin Newsom for allowing schools to remain closed despite confirmation from the Centers for Disease Control and Prevention (CDC) that it’s generally safe for kids to return to classrooms.

“Our elitist Gov. Gavin Newsom has sat idly by while he has crafted an education equality gap that will haunt students their entire lives,” Faulconer said at a press conference in Sacramento. “Classroom learning must be the norm, not the exception.”

Faulconer, 54, launched his bid earlier this month to replace Newsom, who is facing the likely prospect of a recall election fueled by growing discontent over his handling of the COVID-19 pandemic, and its impact on businesses, mental health and public schools.

California’s public schools have remained closed since March, when Newsom announced the first statewide stay-at-home order. Though the CDC has said it’s generally safe for students to return to classrooms so long as basic safety guidelines are followed, the governor has been unable to reach a deal with teachers’ unions over the conditions of resuming in-person learning.

Faulconer, who was mayor of San Diego from 2014 to 2020, said Newsom “should have had the union at the table months ago following the CDC’s confirmation that it’s safe to teach at school.”

“(Newsom) left the union holding all the cards and he wasn’t willing to hold them accountable,” Faulconer said. “As a result, too many districts haven’t made meaningful progress toward reopening classrooms.”

Faulconer, a Republican, said that if he were governor, he would tie education funding directly to in-person attendance, though he hinted he would be open to accepting some form of a hybrid model. If school districts still won’t reopen, Faulconer said he would look for ways to give public school parents an education stimulus check.

“Parents have had to pay for tutors. Moms and dads have had to give up shifts of work and even jobs so they can be with their kids at home,” he said. “Many families have had to purchase laptops, tablets, faster internet. Mom and dad have to be both parents and teachers.”

“If that’s the case, the state of California should step up to help make them whole,” Faulconer said. “California’s families pay taxes so their kids can learn in school. That’s not happening. They should get some of their money back.”

Fox News has reached out to the California Teachers Association with a request for comment but did not hear back by the time of publication.

Faulconer’s comments came the day after Newsom signed a $7.6 billion coronavirus relief package. The new laws will give at least $600 one-time payments to 5.7 million people while setting aside more than $2 billion in grants for struggling small businesses.

California’s stimulus package will give up to $25,000 grants to small businesses with revenues between $1,000 and $2.5 million. Most people will get the $600 payments by claiming the California earned income tax credit on their state tax returns. 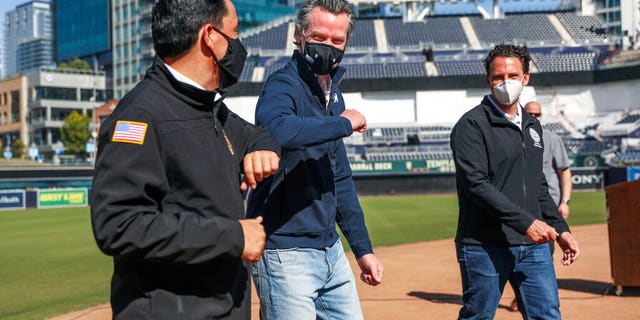 FILE: California Governor Gavin Newsom, center, bumps elbows with San Diego Mayor Todd Gloria after a news conference at Petco Park, which will host a vaccination site in a parking lot next to the ballpark in San Diego.
(The San Diego Union-Tribune via AP)

But the new stimulus package does not offer more funding for schools. At a press conference on Tuesday, Newsom appeared to dodge a question on providing a timeline for schools to reopen or whether he might reach a deal with teachers unions.

The governor has spent much of the past several weeks doing a vaccination roadshow, traveling to inoculation sites to tout the state’s rapidly improving coronavirus numbers and efforts to build an infrastructure to provide millions of shots every week. Critics, meanwhile, cynically contend the governor’s appearances are merely an effort to quell the recall threat.

Recall Gavin 2020, the main committee leading the campaign, has gathered more than 1.7 million signatures as of Wednesday – nearly 300,000 more than the threshold required for a ballot. Organizers tell Fox News they are aiming to collect upwards of 2 million ahead of the March 17 deadline to compensate for invalidated signatures.