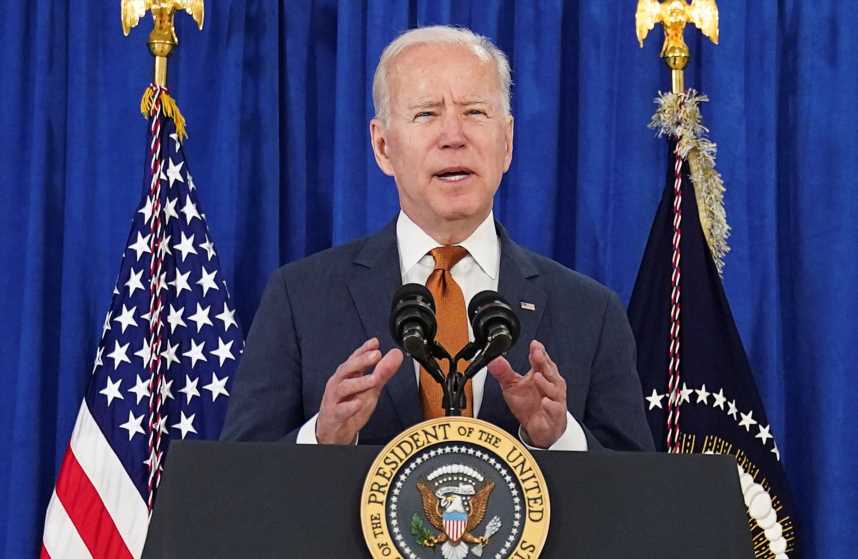 Biden responds to the May jobs report: 'Our plan is working'

WASHINGTON — President Joe Biden responded to the May jobs report on Friday, saying the steady growth in jobs and the decline in unemployment is evidence his economic plan is working.

"None of this success is an accident," said Biden, who spoke in Rehoboth Beach, Del. "It isn't luck. It's due in no small part to the cooperation of the American people," who have worn masks and gotten vaccinated for Covid-19.

"And it's due in no small part to the bold action we took with the American Rescue Plan," said Biden, referring to the massive Covid relief bill Democrats passed in March.

"This is progress that's pulling our economy out of the worst crisis in the last 100 years," Biden said.

Nonfarm payrolls added a solid 559,000 jobs in May, the Labor Department reported. But the number fell short of the 671,000 jobs that economists surveyed by Dow Jones had anticipated.

The unemployment rate fell to 5.8% from 6.1%, which was better than the estimate of 5.9%. An alternative measure of unemployment that includes discouraged workers and those holding part-time jobs for economic reasons also edged lower, to 10.2%.

"Covid cases are down. Covid deaths are down. Unemployment filings are down. Hunger is down, and vaccinations are up," said Biden. "Jobs are up. Wages are up. Manufacturing is up. Growth is up. People gaining health care coverage is up. Small business confidence is up. America is finally on the move again."

Despite the gains, the U.S. is still about 7.4 million jobs shy of where it was pre-pandemic.

Even though they're called "May jobs numbers," the actual figure is calculated during the second week of the month, based on that week's data. This is especially relevant for understanding May's numbers in the context of the pandemic recovery.

As Biden noted, in the three weeks since the May jobs figures were calculated, more than 21 million working-age adults have been fully vaccinated, and are now more likely to return to jobs, spend money on leisure and consumer goods, and plan summer travel.

Another milestone not fully captured by the May jobs numbers is the impact of the CDC's announcement on May 13 that fully vaccinated adults no longer need to wear masks outdoors in crowds, or in most indoor settings.

The announcement had a domino effect on state level mask mandates, helping to draw Americans back to office buildings, healthcare providers and other activities they had avoided during the past year.

One notable part of the report was an acceleration in wage gains, which rose 2% year over year from being up just 0.4% in April.

Economists had largely been dismissive of average hourly earnings numbers for much of the post-pandemic period, noting that the bulk of hires came from higher-earning positions, which made wages look like they were rising for everyone but left many low-wage workers out of gains.

With the return of more hospitality workers in May, the numbers are more relevant now and indicative of rising wage pressures across the economy, not just for higher earners.

Some economists fear that increasing wages could lead to further inflation, and they blame enhanced unemployment benefits for causing a "labor shortage" that forced huge companies like Bank of America and McDonald's to raise their hourly minimum wage.

Biden rejects this view of the economy. "When it comes to the economy we're building, rising wages aren't a bug, they're a feature," he said during a speech in Ohio last week.

During the same speech, Biden renewed his call for Congress to raise the federal minimum wage to $15 an hour.

The May job report is the first full measure of the labor market since the shock of April's numbers, which fell far short of economists' initial expectations.

States Where The Most People Work For The Government

‘Much of this suffering can be prevented’: CDC urges parents to vaccinate their teens after report shows rising hospitalization rates
Technology