Biden, campaigning in battlegrounds on eve of election, says it's time for Trump to 'pack his bags' 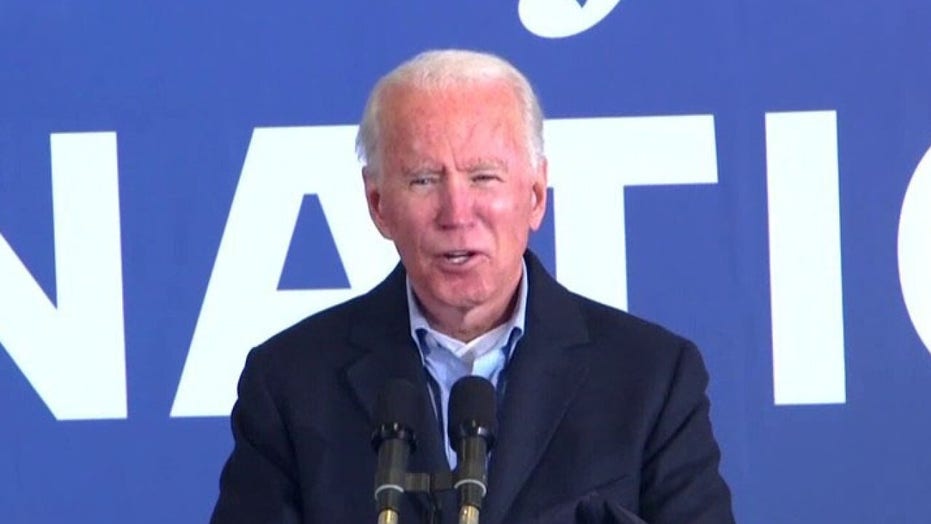 Biden: I will ‘hire Dr. Fauci,’ we will ‘fire Donald Trump’

Kicking off his final day of campaigning ahead of Election Day in battleground Ohio, Democratic presidential nominee Joe Biden took aim at President Trump’s handling of the coronavirus pandemic and stressed that it was time for the president “to pack his bags and go home.”

Campaigning in Cleveland, Ohio, on Monday afternoon, the former vice president argued that Americans have tired of Trump’s presidency.

“We’ve got a whole lot of work to do. If I’m elected your president, I’m going to act on day one,” Biden vowed. “On day one of my presidency, we’re going to put into action a plan” to combat the coronavirus, which he said would emphasize “masking, social distancing, testing, tracing.”

THE CLOSING STRATEGY: A LOOK AT WHERE BIDEN AND TRUMP ARE CAMPAIGNING ON ELECTION EVE

And taking aim at a president who for months resisted wearing a mask in public and who has continued to ridicule Biden’s mask wearing, the former vice president asked, “imagine where we’d be if this president from the beginning just wore a mask instead of mock wearing a mask.”

Biden spoke amid a new surge in the coronavirus, which has taken the lives of nearly 230,000 Americans. More than 9 million cases of COVID-19 have been reported since the pandemic swept the nation in February and March. 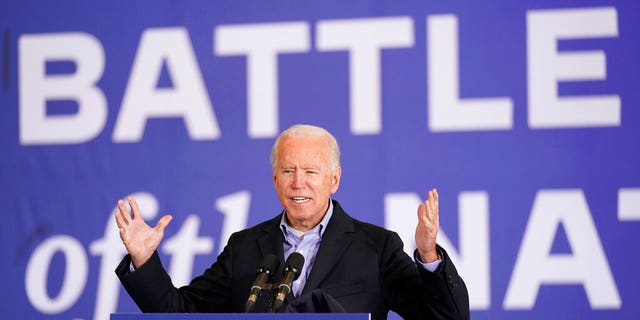 Biden also spoke the day after the president took aim at Dr. Anthony Fauci, the director of the National Institute of Allergy and Infectious Diseases and the most prominent and well-known member of the White House coronavirus task force.

The president, who has had a contentious relationship with Fauci, was complaining about news media coverage of COVID-19 when a large crowd of supporters at a late-night rally in Florida began chanting, "Fire Fauci.”

"Don't tell anybody, but let me wait until a little bit after the election," Trump told his supporters, who cheered. "I appreciate the advice."

And he once again charged that the president’s “waved white flag of surrender to this virus.”

He pledged that “I’m never going to wave the white flag of surrender. We’re going to beat this virus. We’re going to get it under control, I promise you” and spotlighted that “the first step to beating virus is beating Donald Trump.”

Biden has made his criticism of the president’s handling of the coronavirus a key part of his closing campaign theme. Polls indicate that the pandemic, along with an economy severely deflated by the coronavirus, are the top two issues on the minds of American voters.

The president has repeated said the past two months that the country is “rounding the corner” or “rounding the turn” in defeating the coronavirus and has promised that “vaccines are coming along great.”

Biden’s stop in Ohio was a last-minute decision by his campaign.

The Buckeye State has long played a crucial role in presidential elections, with razor-thin margins between candidates. It was the state that famously put George W. Bush over the top in 2004 for a second term. Four years ago, it appeared it would be another close contest, with an average of the polls on the eve of the election putting Trump narrowly ahead. But Trump ended up swamping 2016 Democratic nominee Hillary Clinton by eight points, flipping the state and winning Ohio’s 18 electoral votes. Trump’s margin of victory was the largest by any presidential candidate in nearly three decades.

But Ohio’s very much in play again, with average of the final polls in the state indicating Trump with a razor thin .2 point edge over Biden.

Biden spoke in front of more than 100 cars packed with supporters. There was a larger overflow lot for supporters who were turned away due to spacing issues due to social distancing amid the coronavirus.

The former vice president headed to Pennsylvania after his Cleveland stop.

"I will be the most pro-union president you've ever seen," Biden pledged at a rally in Beaver County, on the western edge of Pennsylvania.

And Biden back against the president's repeated charges that the former vice president would ban fracking, an industry crucial to western Pennsylvania's economy.

"No matter how many times Trump's tried to lie about it, I will not ban fracking. Never said I would," Biden delcared.

Of all of the battlegrounds, Pennsylvania may be the most crucial – and is getting the most candidate traffic in the final stretch.

“Pennsylvanians who haven’t voted yet – we need every one of you to vote,” Biden implored at a drive-in car rally in Philadelphia Sunday night. “Pennsylvania is critical to this election.”

Four years ago, Trump became the first Republican nominee to win Pennsylvania since George H.W. Bush in 1988. Trump carried the state – and its 20 electoral votes by just seven-tenths of 1 percent.

The Biden campaign has heavily concentrated on Pennsylvania, the former vice president’s native state. During his nearly four decades in the Senate representing Delaware, Biden was known as Pennsylvania’s third senator.

An average of the final surveys indicates Biden with a 4.3 point edge over the president. Trump campaigned in the Keystone State on Saturday and returns Monday. Besides the former vice president’s events in the state on Monday, Biden, running mate Sen. Kamala Harris, and their spouses are fanning out across the Pennsylvania all day on the eve of the election.