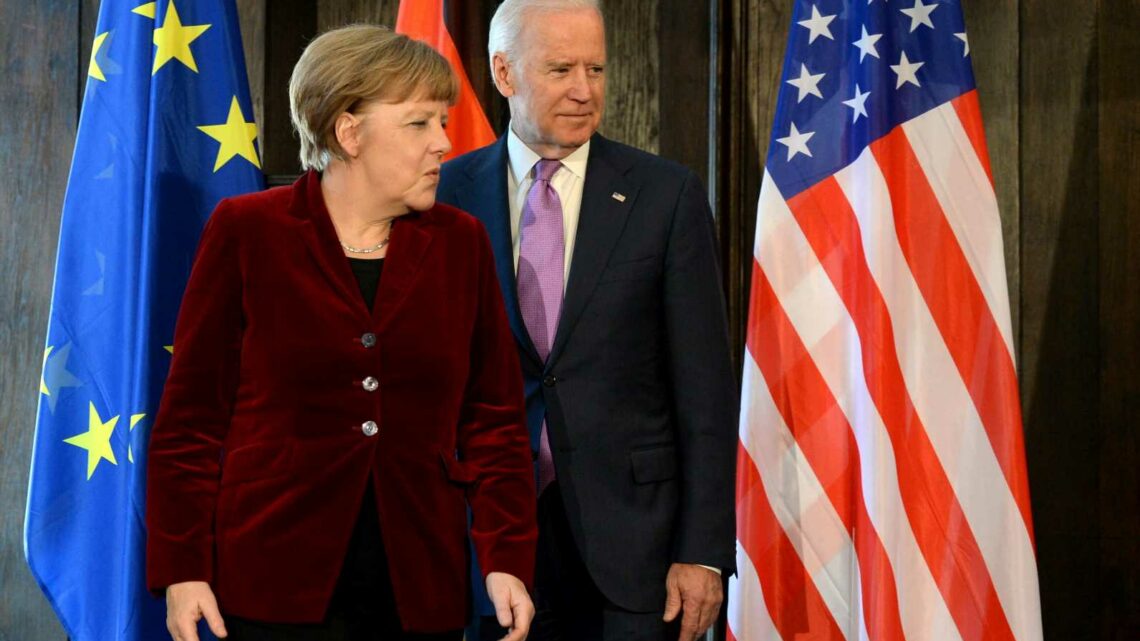 Biden and Merkel to discuss Afghanistan, cybersecurity and Nord Stream pipeline this week

WASHINGTON – President Joe Biden is slated to discuss an array of pressing issues with German Chancellor Angela Merkel next week, in what may be her last trip to Washington after nearly 16 years at the helm of Europe's largest economy.

The two leaders are expected to share their concerns on the deteriorating security situation in Afghanistan, the steady drumbeat of cyberattacks, ending the Covid-19 pandemic, long-standing trade issues and the Nord Stream 2 gas pipeline.

"From the German perspective, this will be a working visit," a senior German government official explained, speaking on the condition of anonymity in order to discuss details of the chancellor's trip to Washington.

"Obviously, over the past years, we had a number of fits and starts in the bilateral relationship. The entire focus was on issues where we disagreed," the official said, adding that sometimes "allies were seen as foes."

Throughout his administration, former President Donald Trump frequently dressed down NATO allies and partners. He threatened to reduce U.S. military support to NATO if allies did not increase spending. In 2019, Trump singled out Merkel for not meeting the 2% of GDP spending goal that was set at the 2014 NATO summit in Wales.

Germany, at the time, was only one of 19 NATO members that had not met the 2% GDP spending goal.

"There are always problems in relationships, that's completely normal because we tend to have different vantage points and perspectives and interests sometimes and we're different in size and power and vulnerabilities and so forth," the official explained.

"But what is important and has perhaps not been seen that way entirely in the past years is how you actually deal with problems," the official said.

Merkel's July 15 visit to the White House, the third time a foreign leader has met with Biden in Washington since he became president, comes a few months before Germany's national election. Merkel, the first woman to lead Germany, has previously said she plans to step down after the September elections.

The two leaders, who have met a number of times throughout their political careers, will most likely discuss shared concerns regarding the future of Afghanistan as U.S. and NATO coalition forces exit the country.

"We are all following what is happening," the senior German government official said, referencing stunning battlefield advances the Taliban has made since foreign troops began the withdrawal process.

"Whatever happens to the airport in Kabul will be hugely important," the official said, adding that Germany is the second-largest donor to Afghanistan behind the United States.

"We are heavily invested in Afghanistan and have been for some time," the official said.

In April, Biden ordered the full withdrawal of U.S. troops from Afghanistan by September 11, effectively ending America's longest war. On Thursday, Biden gave an updated timeline and said that the U.S. military mission in Afghanistan will end by August 31.

"We did not go to Afghanistan to nation-build," Biden said Thursday in remarks at the White House. "It's up to the Afghans to make decisions about the future of their country," he added.

Biden and Merkel are also expected to discuss an alarming number of cyberattacks that have shown the potential of reaching across multiple industries and international borders.

Ransomware attacks involve malware that encrypts files on a device or network that results in the system becoming inoperable. Criminals behind these types of cyberattacks typically demand a ransom in exchange for the release of data.

The Russian-language hacking group REvil has taken responsibility for the cyberattack on Kaseya. The full scope of the ransomware attack is not yet known.

"This a huge problem," the official told CNBC when asked if cybersecurity would be a topic Merkel would raise with her American counterpart.

"Obviously, it's being dealt with on other channels, as you can imagine, but it's a huge problem for all of us and we better figure out ways not only how to deal with them but also how to raise this with countries which the attacks occur or where we believe they come from," the official said.

In May, a hacking group known as DarkSide with suspected ties to Russian criminals launched a ransomware attack on Colonial Pipeline, forcing the U.S. company to shut down approximately 5,500 miles of pipeline. It led to a disruption of nearly half of the East Coast's fuel supply and caused gasoline shortages in the Southeast and airline disruptions.

Colonial Pipeline paid $5 million in ransom to the cybercriminals in order to restart operations. A few weeks after the attack, U.S. law enforcement officials were able to recover $2.3 million in bitcoin from the hacker group.

Less than a month after the cyber assault on Colonial Pipeline, Brazil's JBS, the world's largest meatpacker announced that it had fallen victim to a ransomware attack. The breach disrupted meat production in North America and Australia, triggering concerns over rising meat prices.

The company ultimately paid $11 million in ransom to a different Russian-based cybercriminal group, but not before it briefly shut down its entire U.S. operation.

Biden will likely raise concerns over the completion of a sprawling undersea pipeline that will pump Russian gas directly into Germany.

In May, the United States waived sanctions on the Swiss-based company Nord Stream 2 AG, which is running the pipeline project, and its German chief executive. The waiver gives Berlin and Washington three more months to reach an agreement on Nord Stream 2.

If completed, Nord Stream 2 will stretch 764-miles, making it one of the longest offshore gas pipelines in the world. Last month, the Kremlin said that only 62 miles of pipeline were left to build.

"So there are different concerns from Eastern Europe and in the United States, mostly linked to the fact that Russia had in the past, weaponized energy exports," the senior German government official said.

"We've seen that with regard to Georgia and we've seen it in the early 2010s when half of southeastern Europe froze," the official said, adding that Berlin was aware of Russia's history of using energy to push a political agenda.

"Given the responses in Eastern Europe, we need to do something and I believe we'll be able to look into possibilities that will mitigate the concerns on the perceived challenges to European energy security."

When asked for a timeline for resolving the Nord Stream 2 issue, the official declined to provide further details.

"We're still talking and we are serious about it," the official said.

Most small business owners are middle-aged, not ‘cool kids’ the media loves