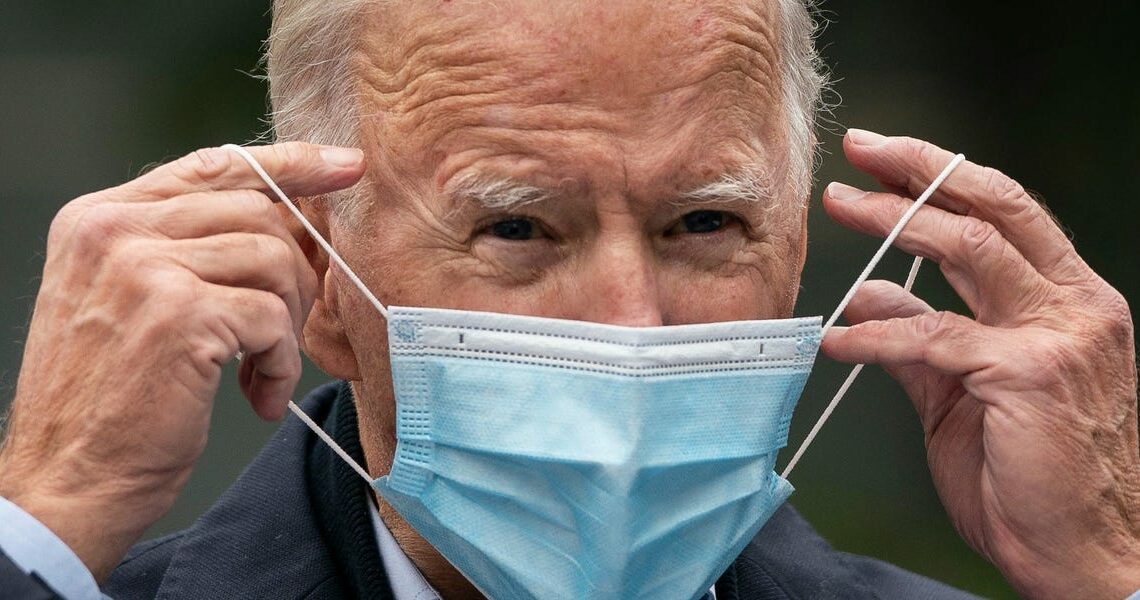 Health insurance companies are set for a windfall in the next coronavirus relief package, even though Joe Biden had vowed during his campaign to take on the industry for its high prices.

The stimulus bill that just passed the Democratic-controlled House includes a provision that would send insurers almost $48 billion through federal subsidies that would temporarily pay for private plans offered in the Affordable Care Act marketplaces. The money would also pay for subsidies for COBRA, a program that laid-off workers can buy into after losing their employer-provided insurance.

Should those provisions pass as part of the $1.9 trillion package headed next before the Senate, health insurance companies — the subject of much criticism by Democrats — would check off major items on their wishlist to Congress.

About 29 million people in the US are uninsured and the subsidies would only make a small dent in reducing that number. Instead, they’d shift how people get coverage and lower premiums for people who already have insurance.

“It’s no secret that it’s not the approach I would have chosen if I were queen of the world,” Democratic Rep. Pramila Jayapal of Washington, who chairs the Congressional Progressive Caucus, told reporters recently.

The $47.8 billion projections come from the nonpartisan Congressional Budget Office, which is tasked with evaluating how policies will affect businesses, consumers, and federal spending. It found that under the latest relief plan called the American Rescue Plan Act, insurers would get $35.5 billion for ACA subsidies and $7.8 billion for COBRA subsidies. Another $4.5 billion would pay the full cost of ACA premiums for people who are on unemployment insurance.

The provisions would cut the number of uninsured by less than 2.5 million overall and lower premiums for about 11 million people who already have coverage, according to an Insider tally of numbers from the CBO report. Critics of the plans say there are better alternatives, such as enrolling people in government health insurance.

“It is saddling taxpayers with unnecessary expense,” Wendell Potter, president of the Center for Health and Democracy, which supports expanding government health plans, told Insider. “This is not the right way or the most cost-effective way to try to bring relief to people who are uninsured or under-insured.”

The expected boon for insurers would come after a mostly good year for the industry’s bottom lines in a troubled economy.

Health insurers had record profits during the second and third quarters of 2020 while the coronavirus started spreading in the US. Even in the midst of a pandemic, people used healthcare services less overall by delaying surgeries and doctor checkups.

That meant insurers didn’t have to pay out as much money for medical care. By the fourth quarter of 2020, though, people started getting care again and insurance profits dipped.

The policies in the stimulus bill indicate Democrats are working with the industry, at least for now, rather than cracking down on prices or cutting into its profits.

A Biden administration official told Insider in an interview Tuesday that right now it was important to focus on how the stimulus plan would quickly make premiums far less expensive for people. The aid package is on track to pass by March 14, which would give Biden a major legislative victory early in his presidency.

“In addition to bringing new people into coverage, this is a massive premium savings for struggling families as they fight to keep health insurance during the pandemic,” the official said. 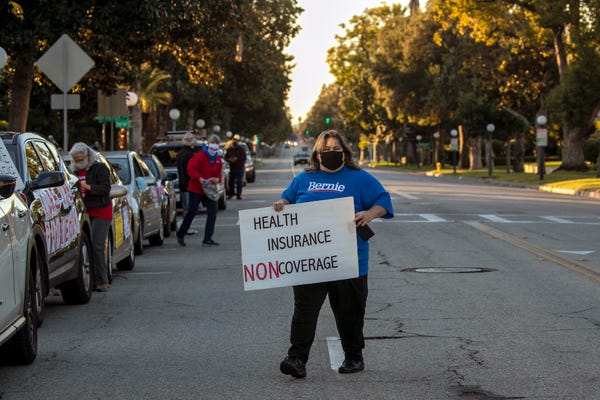 The subsidies for ACA plans and COBRA have backing from the powerful health insurance industry as well as many healthcare providers and businesses. The subsidies address the problem of high premiums by having the government pick up a greater share of the costs.

Democrats say the subsidies in the bill provide the best way to move quickly in the midst of an international emergency and to fulfill their promises to strengthen the Affordable Care Act.

Millions of people find ACA premiums to be too expensive, and Biden promised if elected that he’d make subsidies for those plans more generous just like he’s doing in the stimulus.

But he also promised he’d pair such help with a public option which would increase competition in the ACA marketplaces and lower prices. A public option would allow people to buy into a government plan similar to Medicare or keep their private insurance if they so choose.

Hospital groups oppose the idea of a public option because they’d get paid less to deliver medical services. And a public option would lure customers away from private insurers.

Despite industry opposition, several Democrats in Congress have said they hope a public option would be next on Congress’ agenda, even as soon as this year.

But the task will be difficult given the entrenched industry opposition and Democrat’s slim Senate majority.

They aren’t united on how to create a public option and Republicans oppose expanding government insurance or additional funding to the Affordable Care Act. Some have said they’d be open to COBRA subsidies.

“The first step you’re seeing played out is: What is the smaller, low-hanging fruit we can do to make healthcare more affordable and more accessible? It’s more of a moderate approach,” said the lobbyist and consultant, who requested anonymity to speak candidly.

“This bill was about a quick recovery solution,” the person added. “No one is ready to talk about a public option right now.” 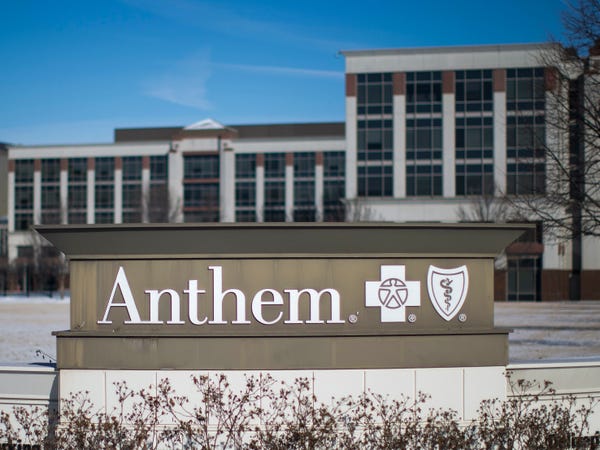 ‘Enriching an industry that doesn’t need it’

Potter, who was a health insurance executive before becoming a whistleblower, said that Congress should start planning for a public option to reduce healthcare costs in the long-run. Potter said he was particularly worried about the high out-of-pocket costs people will still face under private plans for prescription drugs and doctor and emergency room visits.

“This is not a good, sound economic policy for the country,” he said of the temporary subsidies in the stimulus. “It is enriching an industry that doesn’t need it and there are other ways to do this.”

The healthcare industry supported Biden over his predecessor Donald Trump during the 2020 election. Though Trump cut taxes for corporations, he also tried unsuccessfully to kill the Affordable Care Act through Congress and the courts. The industry opposed his actions because they would have caused massive disruption.

The Biden campaign raised almost $57 million in personal donations from healthcare executives over the course of the 2020 cycle, while Trump’s campaign brought in $28 million, according to the Center for Responsive Politics, which runs the money-in-politics website Open Secrets.

Health insurers such as Centene and Molina stand to profit from the changes in the relief package, analyst Scott Fidel of Stephens predicted in a research note.

Asked about the legislation, a Centene spokesperson said the company supported “all efforts to facilitate access to comprehensive, high quality, and affordable health insurance for more Americans.”

Insurers support not only more funding for the ACA marketplaces but other plans they administer alongside the government, such as Medicaid. In addition to the subsidies, the coronavirus aid package has a provision to try to entice states to enroll more low-income people in Medicaid. Insurers stand to benefit from that move as well.

Organizations like the Partnership for America’s Health Care Future support these kinds of measures, within the existing system, rather than trying to create a new plan.

“The best way to expand access to quality, affordable health care is to build on the strength of our current system, where private coverage works together with public programs like Medicare and Medicaid to get Americans covered,” said Lauren Crawford Shaver, executive director for the organization, which is a coalition of healthcare and business groups. 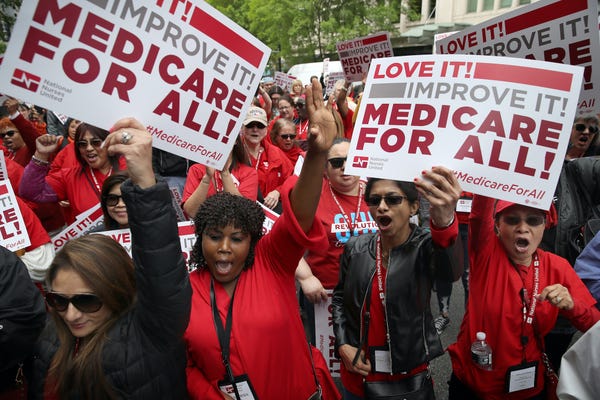 Eyes on the next relief package

Potter said the health insurance approaches Congress and the administration were taking was “politically expedient” because they would “satisfy the desires of big campaign contributors and entities with a lot of lobbyists.”

He warned that, in contrast, moving toward a public option would be “a heavy lift because what you’re trying to do is really attacking healthcare costs in ways that the Affordable Care Act did not and you’ve got entrenched opposition to it.”

Some Democrats still want to try. Sens. Tim Kaine of Virginia and Michael Bennet of Colorado have a public option plan that they hope can be passed under a reconciliation bill. The process fast-tracks legislation and only requires 51 votes in the Senate, but there are also complicated restrictions tied to it that have to be interpreted by a referee called the parliamentarian.

Jayapal, too, said she told the Biden administration and House Speaker Nancy Pelosi that she wanted to see a public option in the next legislative package Congress tackles.

She added that Congress hasn’t done enough to make sure uninsured people are covered as part of the stimulus package, but that progressives wouldn’t stand in the way of the current plan.

“We are where we are,” Jayapal said. “And so the question is: How quickly can we get people covered? A public option would take legislation from Congress and we need to get this rescue package done quickly.”

Progressives want to make sure a public option that Congress creates would be administered by the government rather than a plan like Medicare Advantage that’s run by private insurers and is lucrative to the industry. Many centrists support the latter arrangement, while others prefer lowering Medicare’s eligibility from 65 to 60. All of this division threatens consensus.

Jayapal and other progressives would ultimately prefer to go further in the form of the Medicare for All Act. It would virtually eliminate all private health insurance in favor of placing everyone living in the US into a single, government-funded health plan.

This is the kind of snowball effect the health insurance industry’s lobbying arm, America’s Health Insurance Plans, warns about, pointing out that 183 million people in the US now have coverage through their employers.

“The American people want healthcare that works — not a one-size-fits-all health care system. They want to improve what’s working and fix what’s broken,” David Allen, AHIP spokesman, told Insider. He added, “a government-run insurance system will fail, and tens of millions of Americans will pay more to wait longer, for worse care.”

The health insurance industry is almost certain to lobby for the ACA subsidies to become permanent, given that it has pushed for them for years.

The Biden administration hasn’t publicly disclosed a timeline for its other healthcare policies including a public option.

“We are 32 days in and are working to deliver on as much as we can as quickly as we can,” the Biden administration official said. “But there’s a lot of legislative work to do over the rest of the administration.”

This story originally ran on February 24 and has been updated to reflect the latest developments.