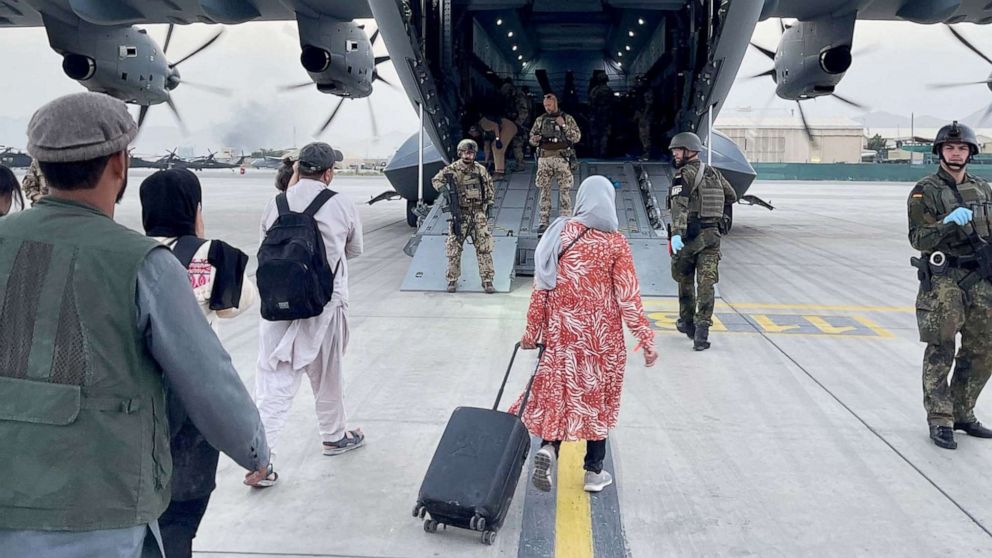 The TAKE with Averi Harper

Amid bipartisan calls for Americans and Afghan allies to be evacuated from Kabul faster, members of Congress will get more details about the situation on the ground Friday.

Lawmakers from both chambers will be briefed on the state of affairs in Afghanistan. Secretary of State Antony Blinken, Defense Secretary Lloyd Austin and Chairman of the Joint Chiefs of Staff Gen. Mark Milley will speak with members of the House of Representatives. Senators will also receive a briefing. Both will be unclassified.

The briefing comes after another chaotic day at Kabul’s airport. The State Department said Thursday that 6,000 people were cleared to be flown out on 20 flights on Friday — the max capacity for each.

The number evacuated will have to be 5,000 to 7,000 per day to beat the Aug. 31 withdrawal deadline, President Joe Biden told ABC’s George Stephanopoulos Wednesday.

In order for that to happen, though, those looking to flee the ravaged nation need to be able to access the airport and there is no clear plan to resolve that. State Department spokesman Ned Price had a sobering message for those hoping for a safe route.

“At this point, we don’t have the resources to go beyond the airport compound,” Price told reporters Thursday.

While talks continue with the Taliban about allowing safe passage to the airport, no resolution has yet been reached.

The RUNDOWN with Alisa Wiersema

More than eight months after the Jan. 6 insurrection, a dramatic scene in Washington, D.C., on Thursday served as yet another reminder of the safety threats facing Capitol Hill and its surrounding communities.

The incident stemmed from what Capitol Police called “an active bomb threat investigation” after a man drove a pickup truck onto a sidewalk and claimed to have an explosive device. The suspect was identified as 49-year-old Floyd Ray Roseberry of North Carolina, who was eventually taken into custody without incident after hours of negotiations. Authorities did not find a bomb, though they did confiscate possible bomb-making materials from the truck.

In a statement, Speaker Nancy Pelosi alluded to recent dangers posed to Capitol Hill, including an April situation that resulted in a Capitol Police officer’s death after a man rammed into a barricade outside the Capitol.

“Today, once again, the Capitol Police, FBI and other law enforcement dealt with a potential threat to the Capitol Hill community,” Pelosi said.

The confluence of several issues erupting across the nation — including ongoing fears related to coronavirus, potential economic instability and recent escalating tensions abroad — could heighten public sentiment aimed at elected officials, once again putting the intersection of safety and politics in the spotlight.

The TIP with Meg Cunningham

With weeks to go in California’s gubernatorial recall election, the top Republican candidates looking to replace Gov. Gavin Newsom took the debate stage for a third time Thursday, hitting Newsom for his coronavirus response and detailing their plans for how they would handle the state differently.

Elder declined to participate in all of the debates, including Thursday’s, but drew pushback from the participants during a Tuesday night debate for comments he’d made about minimum wage and a column where he wrote that women “know less than men about political issues, economics, and current events.”

Politico reported hours before Thursday’s debate that Elder allegedly brandished a gun at his ex-fiancee in the midst of a heated conversation. He has denied that happened. Shortly after his entry into the race, Elder was considered a front-runner among GOP voters, but he’s had little interaction with the public and has largely avoided the press. Polls show that many voters who say they would like to recall Newsom are still undecided on who they would choose to replace him.

WHAT YOU NEED TO KNOW THIS WEEKEND

The Note is a daily ABC News feature that highlights the key political moments of the day ahead. Please check back Monday for the latest.

Who created the renewable energy miracle?