Austria Set for Election After Video Hints at Corruption

Austria is likely to hold snap elections after the 17-month-old center-right government stumbled over a video showing the vice chancellor promising government contracts in return for campaign funding.

Strache is currently meeting Kurz in the Chancellery in Vienna. He’s scheduled to make a statement at 12 noon.

“For Kurz, to go on with Hofer would be a really risky game, because those issues with the Freedom Party won’t stop and he’s running the risk that it sticks to him,” said Thomas Hofer, a political analyst and consultant in Vienna.

Kurz has already been the subject of rearguard actions by members of his party who objected to the 32-year-old leader’s adoption of nationalist rhetoric around immigration and welfare. Former Vice Chancellor Reinhold Mitterlehner published a book last month that took Kurz to task for abandoning party principles.

The crisis hits Austria just a week before European Parliament elections. Polls suggest Kurz’s People’s Party will win the most votes, followed by the opposition Social Democrats and the Freedom Party, which was expected to get four out of Austria’s 18 seats before this weekend.

The footage from a 2017 meeting with a woman who claimed to be the niece of a Russian oligarch was obtained byGerman weekly magazine Der Spiegel and daily newspaper Sueddeutsche Zeitung. The magazine refused to disclose how it obtained the video and said it doesn’t know what the motives were of the people who made it.

The video dominated the front pages of Austrian newspapers, which discussed possible consequences ranging from a reshuffle of ministers to snap elections. Kronen-Zeitung, a long-time sympathizer of the FPOe, ran with the headline “FPOe Finished.” 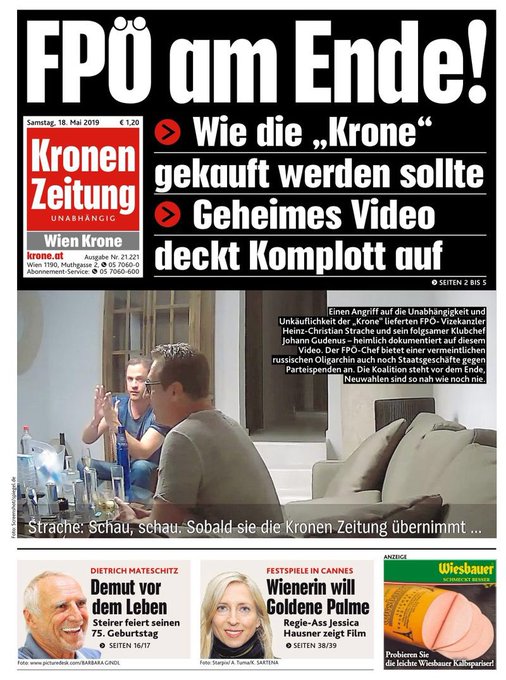 Strache confirmed the Ibiza meeting had taken place, Der Spiegel reported, adding that he’d pointed out to the woman that Austrian laws had to be obeyed, and that he ultimately never received any donations from her or gave her any business. Freedom Party General Secretary Christian Hafenecker reiterated those points in astatement and added that the party’s lawyers are analyzing the “illegally shot” video.

Strache and Gudenus met the Russian woman in Ibiza in July 2017, about three months before Austria’s national election, according to Der Spiegel. The woman told the men she wanted to invest as much as 250 million euros ($279 million) in Austria.

The meeting, at a lavish villa on the island that has long been a favorite holiday destination for Strache, and the conversation appear to have been a set up, Der Spiegel said. The footage, shot by hidden cameras, shows Strache and Gudenus wearing T-Shirts,smoking and drinking in relaxed conversation. Gudenus, who’s fluent in Russian, is acting as translator.

The Freedom Party’s Russian links have long irked observers. In December 2016 Strache and Hofer signed a “working agreement” with Russian President Vladimir Putin’s United Russia party in Moscow. The Freedom Party described itself as “a neutral and reliable mediator and partner” of Russia and the U.S. at the time.

Strache told the woman about a system of campaign funding that the FPOe was using to raise funds from wealthy Austrian donors, according to the report. Der Spiegel says the prominent companies and individuals he named all denied having made donations to the Freedom Party.

He recommended the woman should set up a construction firm to win government contracts after the election. He said he would take away deals from Austria’s biggest builder, Strabag SE, whose main shareholder Hans-Peter Haselsteiner is a known donor for liberal causes.

— With assistance by Jonathan Tirone

Crypto Price Pullback Investigation: The SEC May Be Behind It All As It Enhances Hunt For Security ICOs And Exchanges Delist Coins