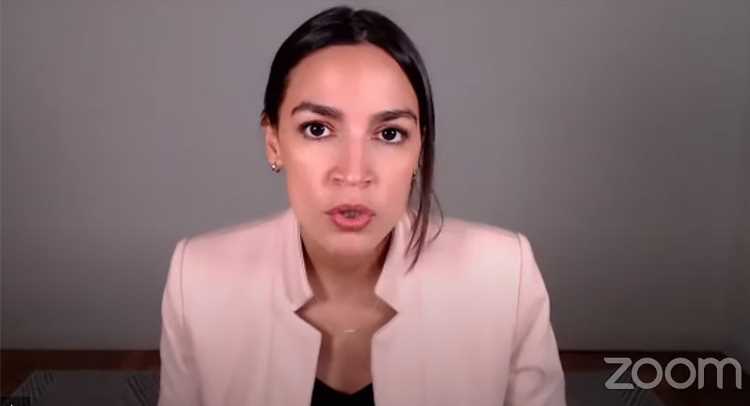 The New York lawmaker, a leading progressive, spoke out about the influx of migrants at the border, where unaccompanied children have been arriving in larger numbers since around the time President Joe Biden took office.

The country has seen an increase in migrants at the Mexican border before, including under both Barack Obama and Donald Trump, as a result of what experts say is a combination of factors. Meanwhile, Congress has not agreed on meaningful immigration changes in years.

Biden, 78, vowed to undo controversial immigration policies put in place by his predecessor, in part through executive orders.

One of those says the U.S. will no longer send unaccompanied children back across the southern border along with adults, reversing Trump's hardline position that his administration insisted was meant as a deterrent but which was widely denounced as cruel.

However, Biden's policy choices — coupled with the spike in children arriving at the border without their parents — has resulted in kids being held inside crowded, detention-like facilities for longer than federal law allows.

Customs and Border Protection data shows nearly 9,500 children arrived at the border last month without a guardian, up from 4,600 in November. The number has steadily increased since then and government officials have said they are, essentially, overwhelmed.

"This has led to completely inhumane and unacceptable, horrifying conditions of children in CBP custody," Ocasio-Cortez, 31, said at the town hall. "It's unacceptable and it's horrifying."

"These systems that exist are wrong," Ocasio-Cortez said. "They're wrong. These are facilities that are designed the way our carceral facilities are designed."

What's more, the news media says they have been kept out of those same facilities, which prevented reporters from documenting what was happening as children were reportedly being held beyond the 72-hour window the law allows.

"As I have said repeatedly, a Border Patrol facility is no place for a child," Homeland Security Secretary Alejandro Mayorkas said in a statement Tuesday, according to ABC News. "We have been working around the clock, in coordination with HHS, to quickly move unaccompanied children out of these crowded Border Patrol stations and into the care of HHS so they can be placed with family members or other sponsors."

Acknowledging both the backlash they face and what they say is the dearth of ready solutions, White House officials have pleaded for patience while recognizing the poor living conditions the thousands of migrant children are enduring at the border.

"It's not acceptable," White House Press Secretary Jen Psaki told reporters earlier this month. "But I think the challenge here is that there are only — there are not that many options."

Children are supposed to be quickly transferred from CBP custody to facilities run by the Office of Refugee Resettlement.

Yael Schacher, a senior U.S. advocate at Refugees International, recently told PEOPLE those ORR facilities are designed more appropriately to house children, compared to the CBP facilities which are meant for adults and to be used during a brief transition period for migrants entering the U.S. and awaiting a resolution to their cases.

"It should be a pass-through," Schacher said. "The Office of Refugee Resettlement really needs to get more beds online."

Biden called on FEMA to head to the border earlier this month, in an effort to set up additional facilities to expand capacity and avoid crowded conditions. But she made it clear she believes people shouldn't draw "false equivalents" between Trump's and Biden's immigration approaches, in light of the harrowing images released recently showing kids sleeping on the ground, packed together with tin foil blankets — an echo, to many, of conditions under Trump.

Unlike Trump, Biden made a point to avoid the family separations notoriously favored — for a time — by the previous administration.

"What is happening here is not the same as what happened during the Trump administration where they took babies out of the arms of mothers and deported their families and permanently traumatized these children," Ocasio-Cortez said.

"Both of these things are barbaric and wrong," she added. "But when you rip a baby out of the hands of a mother, you cannot draw the same comparison."