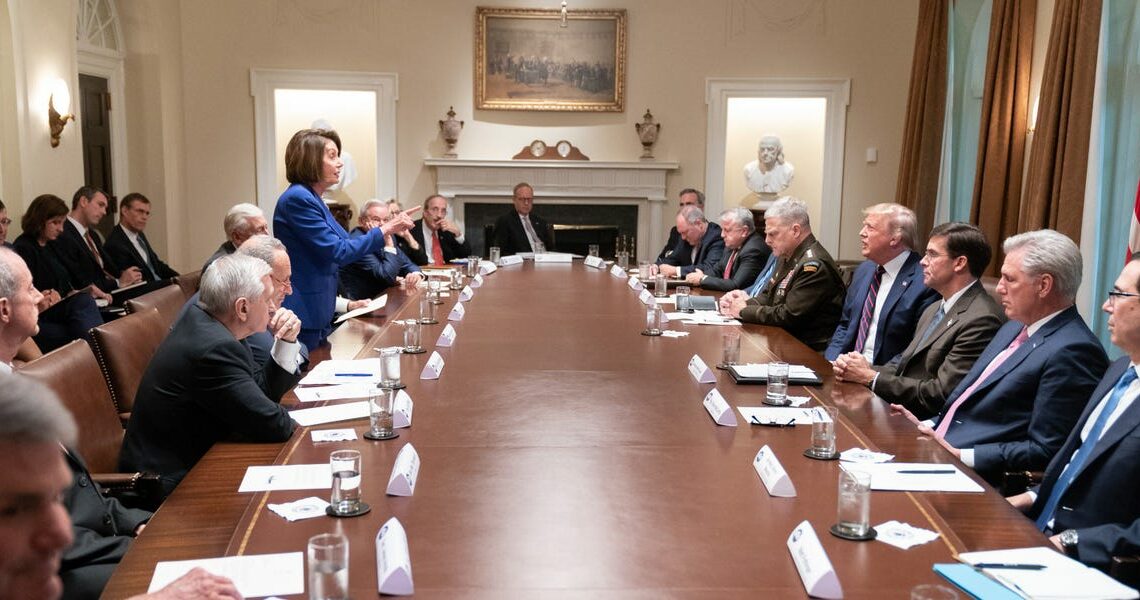 Amid late May’s crush of hyperbolic and histrionic political fundraising solicitations, a familiar gimmick, widely used just days ago, has all but disappeared: those messages promising to magically “triple match” or “quadruple match” contributions.

A line buried in a recent Department of Justice guilty-plea announcement, which used the word “matched,” has so spooked most Republicans and Democrats alike that they’ve all but abandoned this popular — and decidedly bogus — fundraising ploy, say several political operatives, speaking to Insider on condition of anonymity to discuss confidential legal advice.

Out of more than 150 political-committee solicitations Insider reviewed in late May, only a handful still used “match” gimmicks. Just a month before, at least three dozen of the same committees did.

“Stop for now,” is the guidance one Republican political operative said she received from her attorney.

“Quit it,” is the guidance another Republican-aligned operative received.

A Democratic operative said an attorney offered direction that “was basically that unless you’re doing it for real” or “have sufficient funds eligible to serve as the match before the solicitation is sent, don’t do it.”

The abrupt shift in fundraising tactics follows the Justice Department’s May 17 acknowledgement that fraudulent “match” solicitations were one of several misdeeds that factored into a political scam artist’s guilty plea on one count of wire fraud. The man, James Kyle Bell of Las Vegas, now faces up to 20 years in federal prison and a fine.

Death of a gimmick?

House Speaker Nancy Pelosi and the Democratic Congressional Campaign Committee are an extreme example of the switch.

In the final three days of April, as many political committees attempted to pad their monthly fundraising numbers they must publicly report, Insider identified eight separate DCCC emails that advertised “match” promotions.

“I’ll even ensure your gift is triple-matched — that’s how important this deadline is,” DCCC Chair Sean Patrick Maloney promised in one on April 29.

In late May, however, not a single fundraising email from the DCCC, which has not responded to several Insider inquiries, included a “match” message. The committee, which supports the election of Democrats to the US House, has instead encouraged supporters to make a straight-up contribution of a fixed dollar amount, no matches attached. 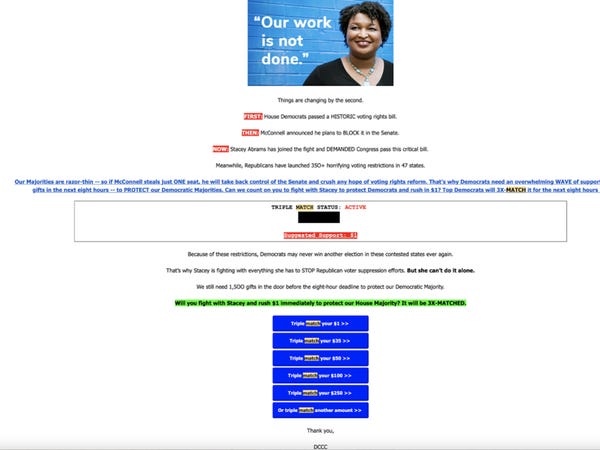 It appears the last time the DCCC hit supporters with a “match” solicitation was May 22, when it sent them a voting-rights-themed email featuring the former Georgia gubernatorial candidate Stacey Abrams.

“Can we count on you to fight with Stacey to protect Democrats and rush in $1? Top Democrats will 3X-MATCH it for the next eight hours,” the email read.

Further complicating matters is an Axios report indicating that Pelosi’s variations on the match gimmick — her promising to “personally” match contributions from supporters — is patently untrue, according to the publication’s analysis of Federal Election Commission records.

The campaign of Republican Sen. Tim Scott of South Carolina on April 28 offered what it billed as its “first ever 800% MATCH” — something it didn’t repeat in late May. 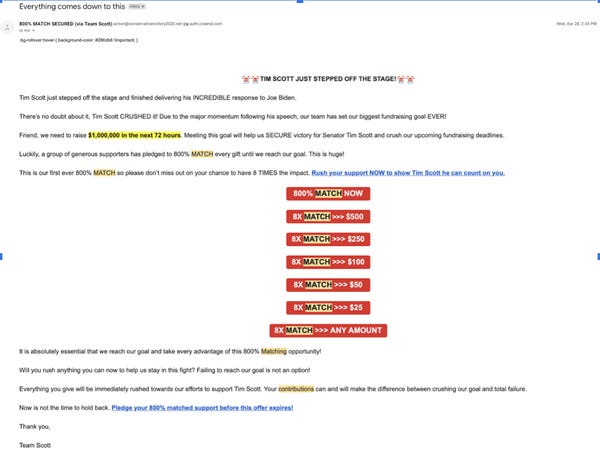 “The Justice Department’s actions put political committees on notice that [they] should proceed with caution if they dangle matches as carrots in their fundraising solicitations but fail to follow through on the match,” said Stephen Spaulding, senior counsel for public policy and government affairs at Common Cause and a former FEC attorney.

The Justice Department did not respond to a request for comment.

Any truth to money matches?

As Insider reported in May, most candidate or PAC fundraising pitches are lies when promising your $100 contribution will somehow turn into $500.

There are two practical reasons for this.

First, if deep-pocketed donors were truly tripling or quintupling every contribution donors made, they’d quickly exceed federal campaign-contribution limits and trigger investigations by federal regulators. This rarely, if ever, happens.

Meanwhile, most match-peddling political committees never explain how they’ll match (or quadruple match) donation. That’s unlike some fundraising appeals from, say, nonprofit organizations or public-radio stations, where a board member or wealthy benefactor is quite literally matching other donations dollar for dollar to incentivize support.

Several political consultants explained that so many political committees used matching gimmicks because they tend to work, resulting in higher email click rates — as well as donations.

A few political committees did continue to use “match” language in their end-of-May fundraising requests.

The most notable: former President Donald Trump’s political action committees, which texted supporters eight times between Friday and Monday with the promise of a “triple match.” 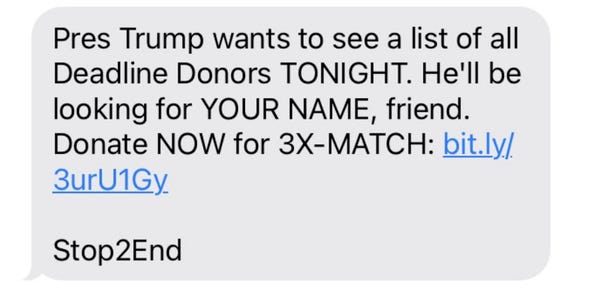 Democratic Action, a political committee sponsored by the Democratic Governors Association, meanwhile, offered an atypically limited promotion on May 30, stating that “a group of Democrats has agreed to MATCH all gifts up to our $50,000 end-of-month goal.”

Other late-May versions of the Democratic Governors Association’s match solicitations featured former first lady Michelle Obama and Michigan Gov. Gretchen Whitmer, with the latter offering no explanation of how a donor’s contribution would be doubled.

If politicians must rely on trickery and deception to generate money from supporters, they’re contributing to an erosion of political trust, said Peter Loge, director of the Project on Ethics in Political Communication at The George Washington University.

“They should say, ‘We can make the truth clickbait,'” Loge said. “This doesn’t have to be a choice between being ethical and being effective.”

Beyond matching gimmicks, some Republican political committees, in particular, also continued in May to automatically opt prospective donors into making an additional contribution payable on May 31 or a date in early June.

Such automatic opt-ins, where political committees pre-check a small donation box, are easy to miss and could result in people donating more money than they intended.

This practice, The New York Times reported in April, infuriated numerous Trump supporters, who in some cases unwittingly contributed hundreds or thousands of extra dollars to the former president’s campaign.

Trump’s committees, as well as those of numerous other Republicans, including Sens. Marco Rubio of Florida and Ron Johnson of Wisconsin, have used this automatic opt-in fundraising technique of late. 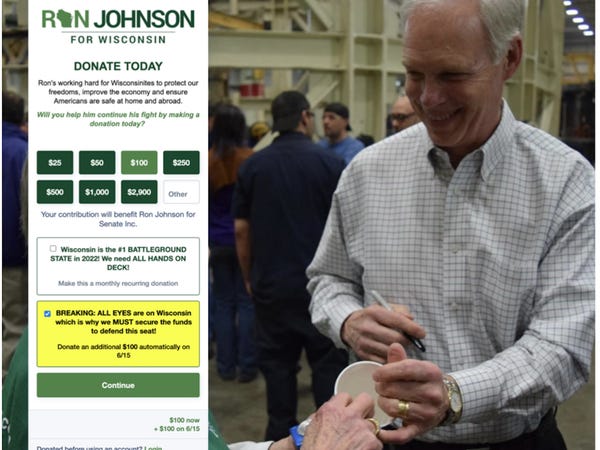 On May 24, seven Democratic senators introduced legislation aimed at doing exactly that.

“It’s clear we should take action to ban this practice and ensure contributors are fully informed,” said Sen. Amy Klobuchar, a Minnesota Democrat and one of the bill’s lead sponsors.