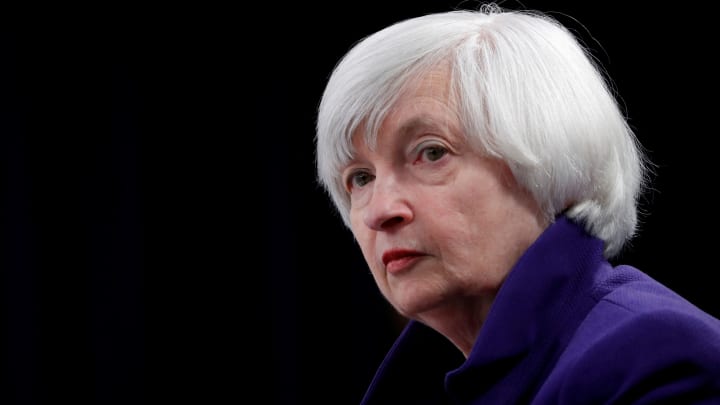 Treasury Secretary Janet Yellen told CNBC on Thursday that there could be parts of the U.S. stock market in which investors should exercise caution.

In an interview that aired on "Closing Bell," Yellen said she believes higher equity valuations are understandable given the accommodative monetary policy from the Federal Reserve.

"Well, partly we're in a very low interest rate environment," Yellen said. "And while valuations are very high, in a world of very low interest rates, price earnings, tight multiples tend to be high. That said there, you know, may be sectors … where we should be very careful," added Yellen, who took over as Treasury chief in late January under President Joe Biden.

The comments came in response to question from CNBC's Sara Eisen, who asked whether Yellen thought it made sense for the major U.S. stock indexes to be trading near record highs during the coronavirus pandemic and its related economic damage. She also asked about big share moves in initial public offerings and SPACs.

Yellen did not specify which sectors she was referring to.

Bitcoin also has seen a big move in recent months and the world's most valuable cryptocurrency broke above $52,000 for the first time Wednesday.

Yellen said she considers bitcoin a "highly speculative asset" and she noted that it's seen high levels of volatility in recent years. Asked whether she believes it needs to regulated, Yellen said any action must be about safeguarding investors.

"I think it's important to make sure that it is not used as a vehicle for elicit transactions and that there's investor protection," said Yellen, a former Fed chair. "And so regulating institutions that deal in Bitcoin, making sure that they adhere to their regulatory responsibilities, I think is certainly important."