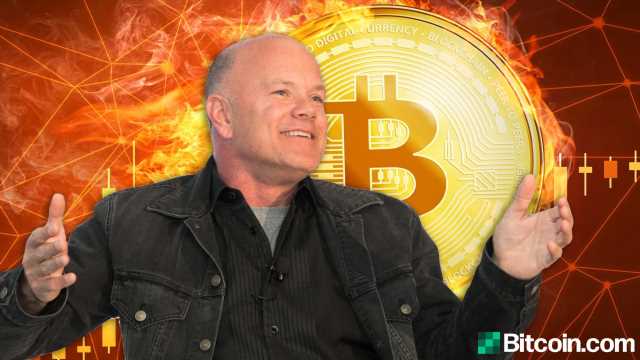 Bitcoin bull and billionaire investor Mike Novogratz has warned about cryptocurrency market volatility in a recent interview stemming from the Barron’s and Marketwatch’s “Investing in Crypto” virtual event series. In general and over the long term, Novogratz is bullish about bitcoin and companies like Coinbase remaining prosperous.

Shares in Coinbase Global, Inc. (Nasdaq: COIN) are currently down 5% since yesterday’s opening and during the launch billionaire Mike Novogratz spoke about the San Francisco firm and the crypto-economy in general. Novogratz has been a long-time supporter of bitcoin (BTC) and other digital assets like ethereum (ETH) as well. Just recently, the crypto investment company he founded, Galaxy Digital filed an application with the U.S. Securities and Exchange Commission (SEC) to list a bitcoin exchange-traded fund.

While speaking positively about the COIN launch on Wednesday, Novogratz said the excitement would cause some crypto market volatility. “In the next week, certainly we could have some volatility because of the excitement around Coinbase,” the former Fortress executive said during his interview with Marketwatch. Despite his recent statements on CNBC and saying he is “feeling bullish [about] the crypto economy,” Novogratz envisions a shakeup.

His statements were directed at XRP and dogecoin when he said:

I’ve seen a lot of weird coins like dogecoin and even XRP have huge retail spikes, which means there’s a lot of frenzy right now. That never ends well, and so we’ll probably have a washout at one point.

Novogratz Considers Coinbase IPO ‘Monumental,’ Crypto Exchange Exec Sees a 40% Chance of $70K Bitcoin Prices by the End of May

Both dogecoin (DOGE) and XRP have seen colossal gains during the last seven days. At the time of writing, seven-day stats for XRP stand at +64.61% gained and dogecoin gained +114.15% this week. As far as shares of COIN launching, the Coinbase IPO was “monumental” for the industry Novogratz stressed.

Pankaj Balani, the CEO of Delta Exchange indicates his short term outlook after the COIN listing is a lot more optimistic than Novogratz’s opinion.

“Coinbase opened just under the 100BN valuation mark but it failed to sustain the initial gains and closed about 15% lower from the open price,” Balani said. “There have been some concerns around the valuation of the company, given the volatility in its earnings, but that does not take away from the fact that it has the largest market share amongst regulated centralized exchanges, in the U.S., and its business is close to a monopoly, at this point,” the crypto derivatives exchange CEO added.

Delta Exchange’s Balani believes that by the end of May, there is a 40% chance that bitcoin (BTC) prices could tap $70k per unit.

“The next few sessions of trading will decide how new investors are looking at the stock and the sector,” Balani remarked. “Crypto investors are also keenly tracking COIN price as it becomes a proxy for traditional investors’ interest in the crypto space. We saw Bitcoin correct in the wake of COIN’s tepid listing but it held its monthly gains and the crucial $61,000 levels. The sentiment continues to remain strong with the options market currently pricing a 40% chance of BTC hitting $70,000 by the end of May,” Balani concluded.