Bitcoin, the world’s first digital currency, turns 10 on Wednesday. For the casual observer, bitcoin was an abstract idea, something that someday may replace part of the current financial ecosystem.

But for many enthusiasts, it has created much more: an avenue for asset speculation, the mechanism by which to read, write and talk about the mysterious and often misunderstood digital currency technology, and much more.

Here’s the numerical journey for this alternative payment system over the past decade.

When Satoshi Nakamoto, the alias behind the creator of the world’s first cryptocurrency, began shifting units of bitcoin around the ledger, there was just one cryptocurrency, bitcoin. However, as the idea of distributed ledger technology caught on, so did the number of people jumping on the bandwagon.

Some coins were sound, and many were outright failures, but there have been more than 3,000 cryptocurrencies in all, which includes about 1,000 dead currencies, according to historical data from Coinmarketcap. 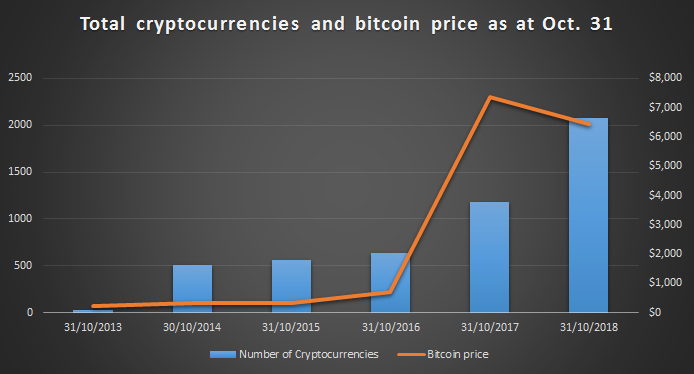 Just as there was a lone cryptocurrency initially, there was a single exchange at one point. BitcoinMarket.com launched in 2010 and a Reddit post reveals that early interest was low: “There are 9 people signed up but only 3 have made a deposit so far. Myself makes 4. Looks like we had our first real trade around noon!,” the post reads.

However, as the number of people looking to trade digital assets grew, so did the exchanges. According to data from CoinMarketCap, there are now 226 listed exchanges. Japan-based Binance is the dominant player with 24-hour trading volume of $750 million.

Although bitcoin began as a proposed solution to a financial-services industry problem — eliminating the so-called trusted third parties — its popularity soon made it one of the hottest asset classes on Wall Street. On the back of a 1,000% increase in 2017, droves of investors flocked to the nascent technology hoping to capture a piece of the bitcoin pie.

There are now more than 600 crypto-related funds with more than $7 billion in assets under management (AUM), according to Crypto Fund Research. More than 400 of these funds were launched in 2017 or later. 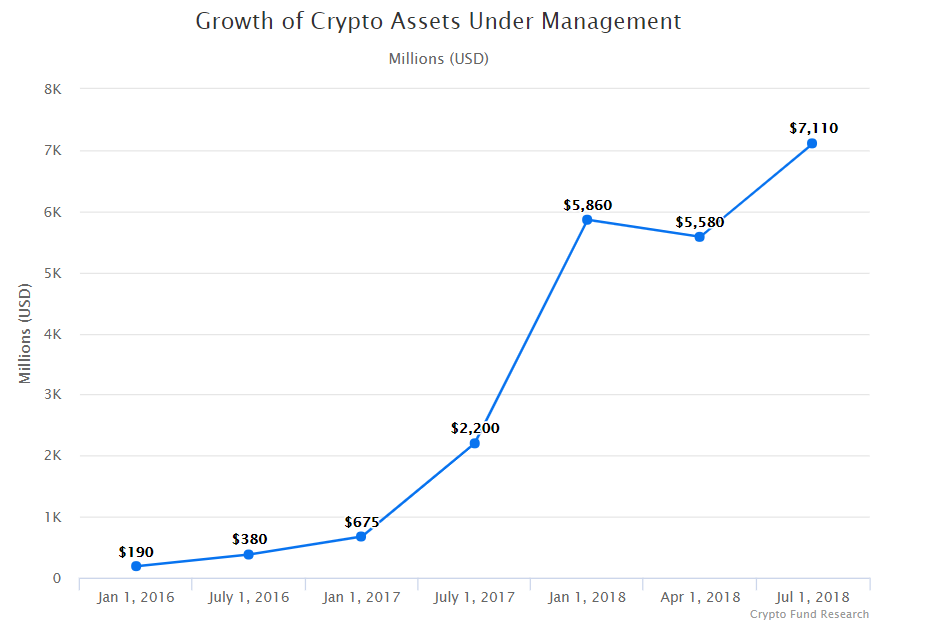 And it’s not just funds. The number of day traders looking to make a few pennies trading bitcoin has skyrocketed. According to data from Blockchain.com, there were just 400 blockchain wallet users at the beginning of 2012. Today there’s an astonishing 29.6 million.

The surge in number of wallets began at the end of 2017, when the euphoria took the price of bitcoin BTCUSD, -0.04%towards $20,000, making many bitcoin owners rich. 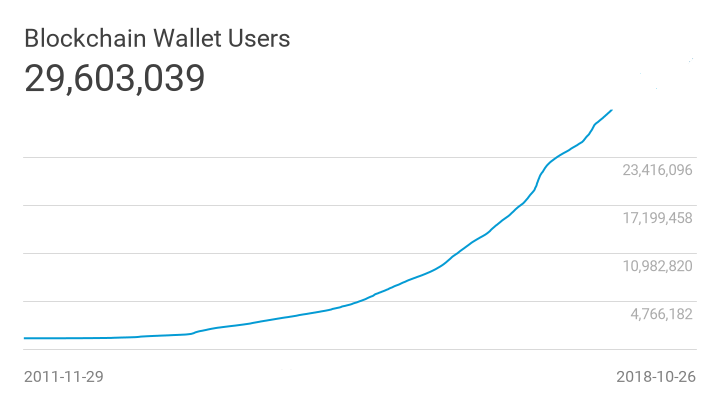 Whether it’s investing, software development, marketing and media around the industry or something else, bitcoin has fueled a number of job opportunities. 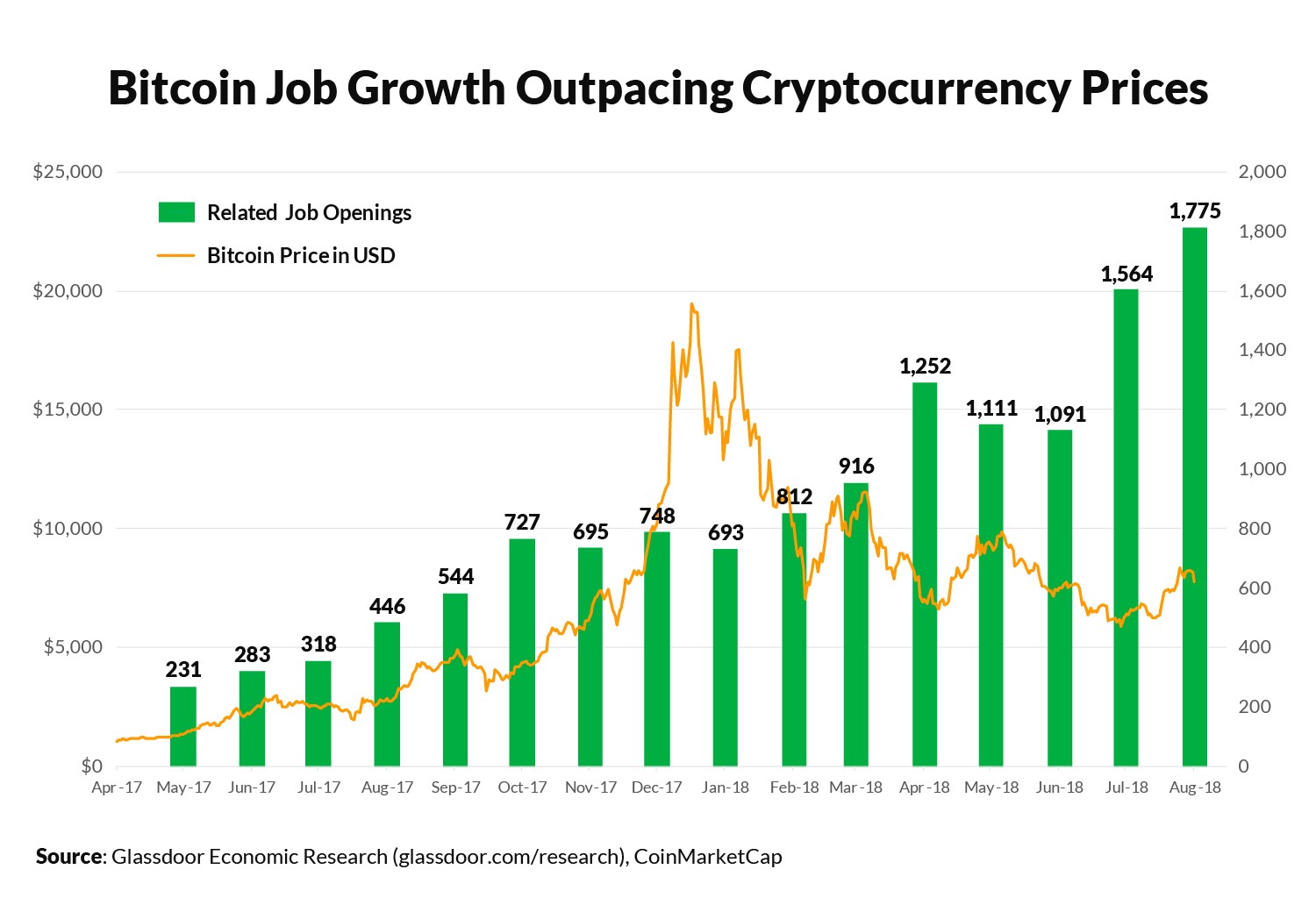 On the media side, podcasting has become increasingly popular. A search of “bitcoin” in the iTunes podcast app returns 38 different podcasts. At the top of most lists are “Unchained” and “Unconfirmed,” both hosted by Laura Shin, who began podcasting when reporting on cryptocurrencies in 2015.

“The podcast came about when Forbes launched a number of podcasts. I saw the news and said, ‘Hey! I want to do one’ and they said that’s fine and gave me one,” Shin said.

Shin said an important element when reporting on crypto is listening to people, even the trolls. “In this industry you have to be open to the idea that you are going to be wrong sometimes,” she added.

Being wrong has been a big part of 2018. Bitcoin went “to the moon” — a phrase the crypto community uses when the price is going up — in 2017; it has done anything but in 2018. This hasn’t deterred bitcoin bulls from predicting the No.1 digital currency will reverse the trend.

Here are some of the more bold predictions:

And at the other end of the scale, many nay sayers have called bitcoin a hoax, or a Ponzi scheme and predicted it will go to zero. One of the more respected skeptics was Joe Davis, a senior economist at Vanguard Group. In May, the head of the Vanguard Investment Strategy Group said bitcoin does not meet the criteria of a currency and said a move to zero is not out of the realm of possibilities.

“Over the past few months, I’ve gotten this question more than any other,” wrote Davis in an op-ed on May 21. “As for bitcoin the currency? I see a decent probability that its price goes to zero.”

On the Horizon: The Future of Mass Blockchain Adoption